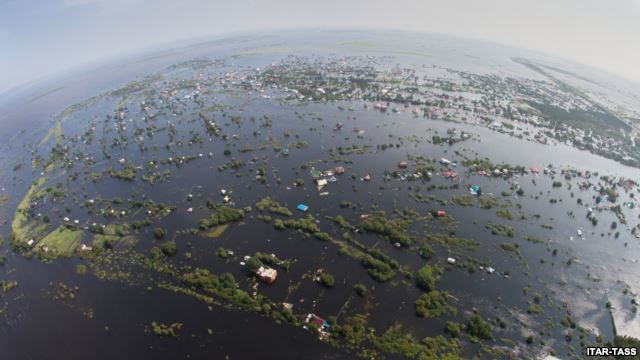 The country's Emergency Situations Ministry said on August 16 that more than 4,600 houses in Amur Oblast, Khabarovsk Krai, and the Jewish Autonomous Region had been damaged by the floods since last week.

The water level in the Amur River near the city of Khabarovsk has passed the 6 meter-mark and is still rising.

Local authorities are concerned about the Zeya and Burei hydropower stations, where the flood levels are reported to be at critical stages.

The Defense Ministry has sent additional troops, equipment, and military medical personnel to the region.

Local officials say the flood levels are expected to crest between August 18 and 23.
Source SOZT
Why is the Amur River basis suddenly flooding? The river winds its way through the mountains of East Russia, and is a major river, combining the water flow from several other rivers as tributaries further inland. A glance at a topo map shows that the Amur winds its way through a mountainous region before reaching the sea. The Pacific plates are constantly compressing, subducting or overlapping one another, and pushing under Japan. What happens inland during this process? The Amur River was pinched, as it was attempting to dump into the sea, so that the river emptied more slowly, carried less of a flow, the river bottom rising so the river depth lessened. Stretch and compression zones BOTH experience these changes, which cause flooding.
EOZT

Thanks Kojima, in China floods killed about 200 people
02.09.13. The Russian Far East in its main city Khabarovsk, the Amur River is flowing at a record 8 meters above its normal level, more than a meter and a half higher than at the time of the city’s previous worst flood.

Summer rains have swollen rivers throughout northeastern China, including the Songhua River. Water levels peaked in Harbin on August 27 and have remained high. The Songhua River is one of many tributaries of the Amur (Heilongjiang) River, which is experiencing its most severe floods in a century.

The Moderate Resolution Imaging Spectroradiometer (MODIS) on NASA’s Terra satellite acquired these images of the river exactly one year apart, on August 30, 2013 (top) and August 30, 2012 (bottom). The images include infrared and visible light so that plant covered land is bright green and water is black. Blue and white clouds are scattered across the 2013 image. Flood waters continue to rise on the Amur (Heilongjiang) River and its tributaries in northeast China and southeast Russia. The floods are affecting millions, forcing evacuations, closing ports, and claiming at least 85 lives. The floods are expected to peak in early September.

The Moderate Resolution Imaging Spectroradiometer (MODIS) on NASA’s Terra satellite acquired these images of the river system on August 27, 2013 (top), and August 31, 2012 (bottom). The false color images include infrared light to differentiate between muddy water and land. (The true color view shows thick sediment mixing with the river water.) Plant-covered areas are bright green, water is black and dark blue, and clouds are pale blue and white.

All of the rivers are noticeably flooded in 2013, and the flooding is worse than it was on August 21, 2013, MODIS’ last clear view of the region.

28.08.13. Unprecedented Floodwaters Continue To Rise In Russia's Far East. The level of the Amur River near the city of Khabarovsk in Russia's Far East has reached a record high of 750 centimeters.
http://www.rferl.org/content/russia-floods/25088411.html 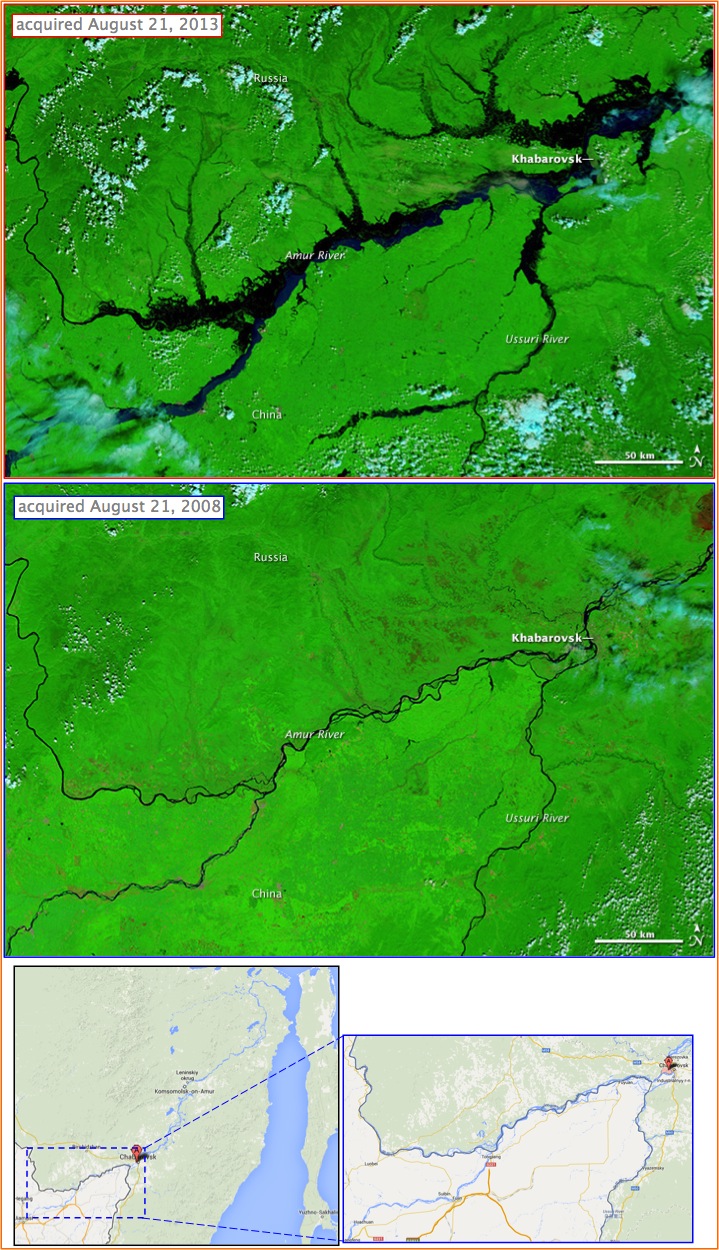 In August 2013, unseasonably heavy rains brought historic flooding to far eastern Russia and northeastern China. Russia’s Amur and Khabarovsk regions were the hardest-hit areas. They received upwards of 300 millimeters (12 inches) of rain in the first twelve days of August alone.

Forecasters have described the event as the largest-scale flood in Russia’s history. Floodwaters forced more than ten thousand people from their homes, inundated vast swaths of farmland, and swamped numerous roads.

In the city of Khabarovsk, the Amur River had swollen to a record height of 696 centimeters (274 inches) on August 21, according to media reports. If the river height reaches 780 centimeters (307 inches), officials in Khabarovsk will begin mass evacuations of the city, which is home to 575,000 people.

The clouds cleared on August 21, 2013, when the Moderate Resolution Imaging Spectroradiometer (MODIS) on NASA’s Terra satellite acquired the top image. The false-color image is made from shortwave-infrared, near-infrared, and red light. In this type of image, water is black or dark blue. Sediment-laden water or muddy ground is pale blue. Clouds are turquoise; plant-covered land is green; and bare earth is tan-pink.

The lower image, taken on August 21, 2008, shows conditions during drier times. The contrast reveals extensive flooding along the Amur and Ussuri rivers. Widespread floods also color many of the tributaries of the two rivers.

As the floodwaters continue to swamp Russia’s Far East, 30,000 people have already been displaced. An RT team travelled to the devastated area to find out why some people are refusing to leave their homes.

Russia’s Far East, which spreads across 2,000 kilometers from west to east, has been hit hard by the seemingly endless inundation.

Local settlements and villages can now be crossed only by boat.

“Water beneath me is three meters deep, and all around you can just see rooftops and treetops sticking out from above the water. We’ve even just come across a couple who were preparing their dinner on the roof, some of the steadfast few who at the moment refused to leave their homes,” Thomas says, sitting in an emergency services’ boat.

Local resident Aleksey explained to RT why he decided to stay put, along with his brother Slava and cat Syoma.

“We have to stay here to try to save what I can. There’s no other place we can live.”

However, they still have to get to the “mainland” for all the necessities – which is no easy feat considering the circumstances. “We have to travel to dry land by boats to meet my wife, who brings us food from the city.”

However, not everyone was prepared to wait the disaster out, with most of the area’s 30,000 people evacuated and accommodated in temporary shelters.

Thousands of emergency workers and troops continue to pour into the affected region to help cope with the disaster and its aftermath.

In the meantime, medics warn that the local health service may be facing a major crisis, with the rising waters being creating an environment that could trigger an epidemic of diseases such as hepatitis or dysentery.

Despite the authorities’ declaration that they are receiving all the help they need, the worst may still be ahead, with the heavy rains set to continue at least until September.

KHABAROVSK, August 18 (RIA Novosti) – The water level of the Amur River in Russia's Far Eastern city of Khabarovsk has peaked at 642 centimeters, reaching the historic maximum of 1897, a local government official said on Sunday.

“Today at 12 p.m. this level was recorded in Khabarovsk. The level is forecast to rise up to 7 meters,” said a deputy head of the local government’s civil defense department, Yevgeny Kuzmin.

Nearly 28,500 people have been affected by floods in three regions in Russia’s Far East – the Amur Region, the Khabarovsk Territory and the Jewish Autonomous Region – following heavy rains.

The floods have inundated some 4,380 houses, inhabited by over 27,000 people in the Amur Region and some 959 people in the Khabarovsk Territory and the Jewish Autonomous Region.

More than 19,000 people have been evacuated, including 6,100 children. One hundred and sixty-six temporary shelters have been set up across the three regions, providing drinking water, hot food and medical supplies.