Could you please explain the STEVE phenomenon in the skies. Apparently it is a recent feature seen close to the Auroras. [and from another] http://www.dailymail.co.uk/sciencetech/article-6080297/Mysterious-r... Mysterious ribbons of light dubbed 'Steve' are NOT auroras, after all: Scientists say the 'skyglows' represent an entirely new celestial phenomenon.  August 20, 2018 Mysterious purple and white ribbons of light seen dancing across the sky may represent a never-before-identified type of ‘skyglow.’ While amateur photographers have been documenting the phenomenon for decades, scientists only began to study it back in 2016. STEVE was initially given its name in honor of the 2006 film Over the Hedge, and the title was later accepted in the scientific community as a ‘backronym,’ standing for Strong Thermal Emission Velocity Enhancement. This type of light event appears closer to the equator than a normal aurora. Unlike a traditional aurora, which is produced as electrons and protons pour into the ionosphere, the researchers found there were no charged particles associated with the STEVE event. This suggests it wasn’t an aurora at all.

Mankind is puzzled by STEVE as they cling to the notion that the Auroras are caused by light rays being bent by magnetism. We stated at the start of the ZetaTalk saga that this was wrong. The light rays are being bent by gravity particle flows, which form a field around the globe similar to the Earth’s magnetic field. Where the magnetic field emerges from the N Pole and returns at the S Pole, the gravity field emerges at both poles and returns at the Equator. Thus objects weigh slightly more at the Equator, and mankind’s probes modeling the gravity field have been finding the Earth gaining weight at the waist.

"STEVE put on a good show," reports Lauri Kangas, who photographed the luminous purple ribbon cutting across the sky over Fort Frances, Ontario. "The display lasted for more than 90 minutes." 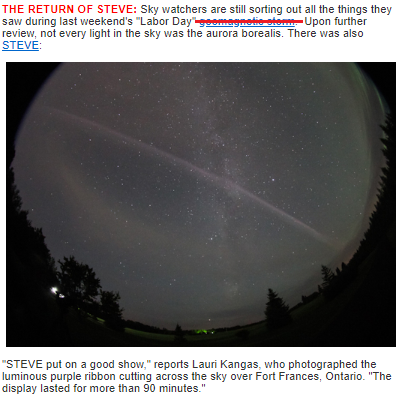