The news is release by NASA:  that the Earth have a second Moon! The News it was also featured on Yahoo Science News! They release a Video too made by JPL!  Is NASA preparing with alternative stories(lies) for the time when the Nibiru will be visible? They still want to go with the dancing “Asteroid theory”!  Zeta predict that some Scientist will Help with the Nibiru explanation after the announcement! Maybe people like Neil Degrasse Tyson who is working at NASA! Will be two messages from NASA? One in “cover up” lines and one made by break away Scientists? Will be two Groups of scientist with two storys base on spiritual orientation with their version?[and from another] http://www.mnn.com/earth-matters/space/stories/earth-has-captured-s... A mini-moon has been orbiting our planet for only around 100 years. It's a remarkable event that proves just how dynamic our gravitational relationship is with near-Earth objects. It's small, measuring in at only around 120 feet across and no more than 300 feet wide, which is probably why it has taken so long for scientists to spot it. (It was only just spotted last April.) Its distance from Earth varies from between 38 and 100 times the distance of our planet’s primary moon. The quasi-satellite was given the label of asteroid 2016 HO3. [and from another]http://www.youtube.com/watch?v=SbbAnVU4rmY A small asteroid has been discovered in an orbit around the sun that keeps it as a constant companion of Earth, and it will remain so for centuries to come. [and from another] http://www.ibtimes.co.uk/planet-nine-not-alone-more-planets-predict...After carrying out calculations relating to the hypothetical Planet Nine, the scientists said the presence of even more planets could better explain the unusual orbits of objects at the far reaches of the Solar System. Scientists found six trans-Neptunian objects (ETNOs) with highly unusual orbital paths. Spanish astronomers Carlos and Raúl de la Fuente Marcos along with Sverre J. Aarseth from the University of Cambridge have now looked more closely at the orbits of the ETNOs. Published in the journal Monthly Notices Of The Royal Astronomical Society, researchers found Planet Nine could keep three of the ETNOs confined to a specific orbit for hundreds of millions of years. However, the three others would become highly unstable in just a dozen million years or so, "eventually triggering their ejection from the Solar System,". Therefore, if Planet Nine exists, it is probably not alone." [and from another] http://www.dailymail.co.uk/sciencetech/article-3639247/Planet-Nine-... One of the biggest mysteries in astronomy that has come into the limelight this year is the question of whether a mysterious planet is lurking at the edge of our solar system. Since an announcement was made at the start of this year, researchers have published a series of papers suggesting where the planet might be and how it could have formed. But the latest theory suggests something none had predicted before - that 'Planet Nine' might in fact be several planets instead of just one. 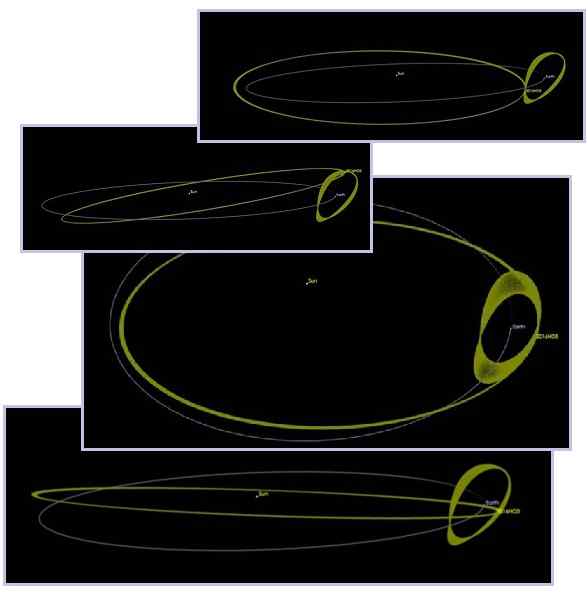 The agenda for Prong 1 was to revisit the gravity tug some 20 Sun-Pluto distances out in the direction of the constellation Orion, to place the possibility of devastation from a long-period orbit object passing through the Earth’s solar system periodically into the public mind. Prong 1 left the public with unanswered questions – the true name of this object (Planet 9 was temporarily assigned), how a gravity tug in the direction of Orion would also result in a similar tug in the direction of the constellation Cetus, and how such expensive sky mapping enterprises such as Hubble and the Kepler probes and WISE could have missed this object.

Prong 2 sought to answer why “Planet 9” evaded discovery for so long by suggesting that Hubble and Kepler and WISE looked afar, at bright objects, so that anything close in or somewhat dim would be missed. As evidence of this, the ESO’s observatory in Chile had discovered several exoplanets overlooked by the other sky mapping enterprises. Prong2’s agenda is to place into the public mind that an object such as Nibiru, shrouded by dust, could sneak into the Solar System unnoticed. To this end we have the newly announced second moon of Earth, an orbiting asteroid, just recently “discovered” by NASA.

ZetaTalk accuracy has been regularly featured during the Prongs. That the gravity tug 20 Sun-Pluto distances matches in distance and location the ZetaTalk description of the Sun’s dark binary twin some 18.74 Sun-Pluto distances away. That the newly discovered exoplanet  travels between two suns, as ZetaTalk had always described Nibiru’s path. That it is currently next to the Sun (where Cetus lies at present). We have predicted that when the Prongs are done, that the world will know that Nibiru exists and is currently next to the Sun, preparing for another passage, and that it arrived in the inner solar system in 2003 as we the Zetas had predicted. What parties will play which roles in this matter, we will not say.