Earth's magnetosphere has been in a nearly constant state of severe compression over the past 36 hours.

Poli, it is still there on 9/7. I don't think this is Planet X or any legitimate object, but a snag or bug in their air brushing software. Per the Zetas, NASA/JPL is doing so much tweaking of the SOHO to obscure the halted orbit and the presence of Planet X, that except for the Sun's rays and part of the Planet X complex (mostly the Moon Swirls) that sneak through, it is all fake. The background stars are fake. The passing planets like Venus are fake, drawn in.

This "shadow" is a program error of some kind, revealing that they DO indeed mess around with the SOHO images we are given. 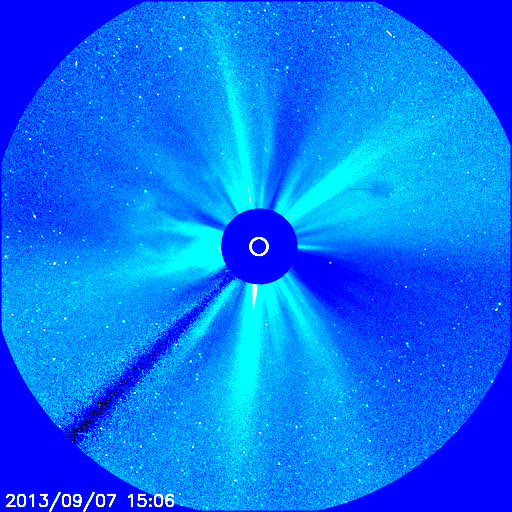 Increased magnetospheric turmoil this week in accordance with the Zetas' explanation of magnetic trimesters.

"These are of course approximate dates as the cosmos does not act according to the Gregorian calendar. However, the magnetic trimesters are echoing what we have frequently referred to as particle crowding, occurring elsewhere in the Universe in such a way as to influence the flow of magnetic particles in the vicinity of your solar system. Your Sun is dominant in his little neighborhood. The planets align with the Sun but in their own little backyards are likewise dominant. But the solar system is swayed by a larger magnetic field which encompasses the solar system. In fact, your human scientists have discovered this, finding the solar system delineated by what they termed a magnetic ribbon.

"Why should this divide into three phases, when magnets on the surface of Earth have no such phases? This is a pulse, from afar, and not relevant to mankind's future on planet Earth. Suffice it to say that this pulse is divided into 3 parts, and they line up remarkably well with a 4 month period, each being a third of an Earth year. Did the Earth arrive at her orbit of 365 days in a year in part because of this magnetic pulse? Indeed, and this also relates to why the Earth and the Sun both tilt in a certain direction, magnetically. Were we to estimate more precisely the point when the pulse changes, it would be more akin to December 17, April 20, and August 12. But there is a slight period after the end of a phase when a particle crowding has not yet subsided, or an increase in particle flow has not yet registered. Thus, the end of those months is most accurate as a guide."

Severe twist of the magnetosphere on August 15 at 12:48 UTC.

Another severe compression of the magnetosphere underway.