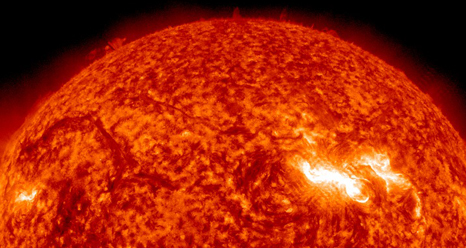 In their rush to get ahead of the possible effects of Planet X, NASA and NOAA also reveal how anxious they are to blame the sun.  (Blaming the sun is a Main Establishment Lie.)

A SPACE weather storm that was forecast to be the strongest in five years has fizzled out and ended up causing no impact to power grids or modern navigation systems, US experts say.

A series of eruptions on the Sun this week sent radiation and solar plasma hurtling toward Earth at high speeds but in the end, the geomagnetic storm registered the lowest level, G1, on a five-step scale.

"Our forecasters really struggled with this one," said National Oceanic and Atmospheric Administration (NOAA) scientist Joseph Kunches, comparing the bungled forecast to watching a pitcher toss a baseball but knowing nothing else until it reaches the catcher.

"We missed the spin on the ball," said Mr Kunches.

NOAA had forecast the storm would be a level three, or strong, and said it would be the worst since 2006. NASA had said it might even be severe....

Mr Kunches said there were no reports of GPS disruption, no reports of problems in terms of electric power, and that anticipated displays of the northern lights, or aurora borealis, would be visible further north than NOAA initially said....

NOAA and NASA had warned on Wednesday that the storm could disrupt global positioning systems, satellites and power grids, and had already caused some air carriers to change their planes' polar flight paths.

Astronauts aboard the International Space Station were not affected by the radiation storm, NASA said.

Geomagnetic and radiation storms are growing more frequent as the Sun leaves its solar minimum period and moves into a solar maximum over the coming years, but people are generally protected by Earth's magnetic field....

The fuss began on Monday at an active region on the Sun known as 1429, with a big solar flare that was associated with a coronal mass ejection that thrust toward the Earth at some 6.4 million km/h.

A pair of solar flares and a CME followed Wednesday going into yesterday....

But while solar radiation storm registered a level 3, the geomagnetic storm ended up being the same minor level as a similar event in January, Mr Kunches said.  http://www.heraldsun.com.au/news/breaking-news/space-weather-storm-...

8000 scientists from 50 countries have attended an annual science summit in Vancouver. What is the real intention of this meeting?

This annual meeting is showing the bruises from the failure of the Global Warming theory. Global Warming was put forth to explain many of the Earth changes the establishment anticipated would be caused by Planet X. The establishment was aware that the ground was heating from the bottom up, due to a roiling core. They could certainly anticipate volcanic activity creating a continuous El Nino, with more violent weather. And in step with what NASA planed to emphasize, a terrible solar cycle, they anticipated a highly active Sun caused by the disruptive presence of Planet X nearby.

Thus the establishment set out to dupe the public, asserting Global Warming and blaming the Sun for magnetic problems. As is well known, the Global Warming fraud imploded and this fraud was revealed to the public in November of 2009. This pulled the UN into the fraud, along with Al Gore. Scientists who had been bullied into cooperating vented their anger, and the public certainly did not get the impression that they should "trust science".

Matters have only gotten worse, as official science cannot explain the Earth wobble, the changing ocean tides, the weather extremes, the rising earthquakes and trembling and roaring ground, nor the signs in the skies. NASA is in the pits in this regard, as is the USGS. NASA of course is an absolute pawn of the establishment, and the USGS has long been forced to deny the increase in quakes. Any scientists pointing to evidence of the presence of Planet X finds his funding taken away and his evaluations vicious. Does this build trust in the public? What science needs to do, to rebuild the public's trust, is refuse to be intimidated. En mass! Get a backbone and tell the truth!  (Emphasis added.)  http://www.zetatalk.com/ning/10mr2012.htm