Any comment? [and from another] https://www.rt.com/usa/394936-us-air-force-space-corps/ Starship troopers: US to create ‘space corps’ in radical Air Force overhaul. Members of the US House Armed Services Committee have voted to create a "Space Corps," a sixth branch of the country’s armed forces focused on military maneuvers beyond the Earth’s atmosphere. The space corps, which has yet to gain full approval, would absorb all of the Air Force’s current space missions under the umbrella of a new US Space Command. It would also make the head of the new service the eighth member of the Joint Chiefs of Staff. The plan, which could be implemented as soon as January 2019, has been developed as part of a radical reorganization of the US Air Force. [and from another] https://www.theatlantic.com/science/archive/2017/06/how-a-few-words... Congress just added “the search for life’s origins, evolution, distribution, and future in the universe” to the agency’s marching orders. Amongst the many pages of the 2017 NASA Authorization Act (S. 422) the Agency’s mission encompasses expected items such as continuation of the space station, building of big rockets, indemnification of launch and reentry service providers for third party claim and so on. But in this year’s bill, Congress added a momentous phrase to the agency’s mission: “the search for life’s origins, evolution, distribution, and future in the universe.” [and from another] http://www.latimes.com/business/la-fi-spacex-nasa-20170301-story.html SpaceX, the upstart company, and NASA, the government agency, both have plans to venture to Mars and orbit the moon. But that doesn’t mean they’ve launched a new space race. NASA has long been SpaceX’s most important customer, providing contracts to deliver cargo and eventually astronauts to the International Space Station. And the Hawthorne company will need NASA’s technical support to achieve the first of its grand ambitions in deep space. [and from another] https://www.washingtonpost.com/news/the-switch/wp/2017/03/07/jeff-b... Blue Origin has also pitched NASA on a public-private partnership to fly cargo and science experiments to the surface of the moon, a mission it has dubbed Blue Moon. This year, it plans to begin crewed test flights of its suborbital New Shepard rocket. By next year, it could start flying paying tourists on trips that would cross the 62-mile barrier that’s considered the edge of space. [and from another] http://www.cbsnews.com/news/russia-plans-to-clean-space-junk-from-e... December 1, 2010. The Russian space agency is going ahead with a plan to spend $2 billion to clean up space debris. [and from another] https://phys.org/news/2016-12-japan-space-junk-collector.html December 9, 2016. Scientists at the Japan Aerospace Exploration Agency (JAXA) are experimenting with a tether to pull junk out of orbit around Earth, clearing up tonnes of space clutter including cast-off equipment from old satellites and pieces of rocket. Researchers are using a so-called electrodynamic tether made from thin wires of stainless steel and aluminium. The idea is that one end of the strip will be attached to debris which can damage working equipment—there are hundreds of collisions every year. [and from another] http://www.zerohedge.com/news/2017-06-29/russian-satellite-will-lau... The project, led by Moscow State Mechanical Engineering University (MAMI), raised more than $30,000 on Russian crowdfunding website Boomstarter. Mayak’s only mission is to be bright and remove defunct satellites from earth’s orbit. [and from another] https://www.clickorlando.com/news/national/nasa-unveils-plan-to-tes... July 1, 2017. The space agency announced plans to redirect the course of a small asteroid approaching Earth, as part of the Double Asteroid Redirection Test (DART). DART would be NASA's first mission to demonstrate what's known as the kinetic impactor technique - striking the asteroid to shift its orbit - to defend against a potential future asteroid impact.  DART launch set for October 2022. 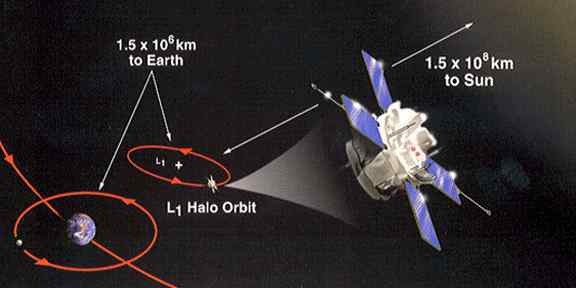 A new focus on space has emerged from both a US Air Force reorganization and NASA mission statements. The US Air Force is splitting off its space functions into a new Space Corps, to take effect in 2019. Congress added the “search for life” to NASA’s mission statement when approving the 2017 budget. NASA is increasingly partnering with Musk’s Space X and may partner with Bezos’ Blue Origin in their desire to go to the Moon and Mars. Then there is the press to clean up the space junk circling Earth, already in operation, and to find an effective means of deflecting asteroids heading toward Earth.

This of course relates to the creeping disclosure over the alien presence on Earth. But the agenda also includes boosting US prestige which has suffered due to budget cuts over the past few years. The US hopes to be seen as a leader, or at least in partnership with the leaders. This is also an exercise in futility. We have stressed that the elite will not be allowed to ride out the Pole Shift on Mars or the Moon, and the Council of Worlds has enforced that decree. The elite will likewise not be allowed to maintain satellites that spy on desperate migrants, nor track their routes.

Earth, and the space around her, will suffer the Pole Shift in her near future, and there is naught that mankind can do to stop this. They can be compassionate to one another, a life lesson that is the point of their 3rd density existence, but any attempt to retain their kingship over one another will fail. During the Pole Shift, and well before hand, the Earth will be lashed by the debris ridden tail of Nibiru, tearing the satellites out of the sky and hammering hail and boulders upon the hapless Earth. Thus all maneuvers to get to Mars or the Moon are fantasies of the elite. And all maneuvers by the US to posture are to “make America great again”, and nothing more.

NASA has picked the companies it wants to design landers for its plans to return humans to the moon.

The companies have 10 months to develop their designs for the Artemis mission, which aims to send manned spacecraft back to the moon by 2024 — the first time it will have done so since the Apollo 17 mission in 1972. NASA will pay the three companies $967 million for this initial design stage.

"This is the last piece we need in order to get to the moon and now we're going to have that under development," NASA Administrator Jim Bridenstine said at a press conference.

"It's important that this agency do this now, because our country and in fact the whole world has been shaken by this coronavirus pandemic... And yet we need to give people hope. We need to give them something that they can look up to, dream about," said Bridenstine.

SpaceX's design is modelled on its 160-foot Starship rocket. 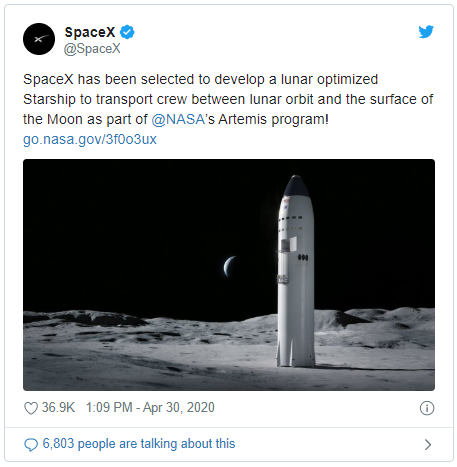 "Great work by SpaceX team & very much appreciate faith in Starship by NASA!" Elon Musk tweeted on Thursday. It was also announced in April that SpaceX will launch two NASA astronauts into orbit on May 27.

Blue Origin — which has developed its design with parts from Lockheed Martin, Northrop Grumman, and Draper — showed off its lander in a YouTube video.

Comment by Cameron W Coates on July 10, 2017 at 11:13pm
I do think that Buzz Aldrin's quip back to President Trump's comment of "there's a lot of space out there right?" Saying "To infinity and beyond" was rather funny! We still need to keep our senses oh humor.