Was this due to EMP? [and from another] http://www.dailymail.co.uk/news/article-3598117/EgyptAir-flight-MS8...
The Airbus A320 left the French capital's Charles De Gaulle Airport at 9.09pm GMT last night before coming down off the Greek island of Karpathos ten miles into Egyptian airspace at around 00.30am. Officials said there was no distress call. A captain on board a merchant ship in the Mediterranean reported seeing a 'flame in the sky'. Greek air traffic controllers said they spoke to the pilot while over Greece and did not report any problems. The plane then disappeared 10 miles into Egyptian airspace while travelling at 37,000ft. The airline said the aircraft was 'fading' when air traffic control lost contact with the plane. Initial reports suggested the plane had not sent out a mayday call. 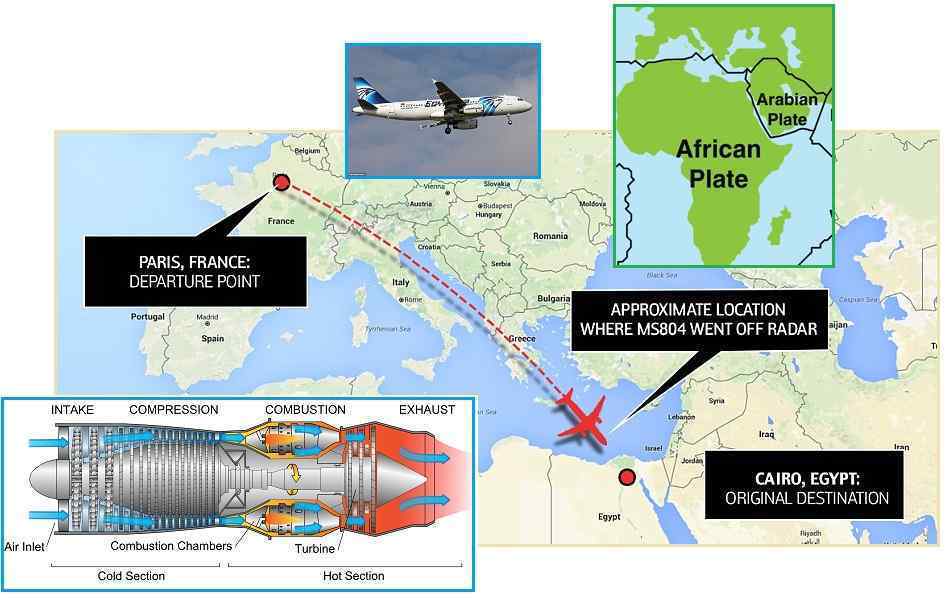 What is known is that MS804 was being flown by experienced pilots, in clear weather, and had not reported any mechanical problems nor issued any distress signals. The plane went down suddenly, with a shipping vessel reportedly seeing a flaming object in the skies at that location, and swerved to the left, then to the right as it disappeared from radar.  Though the location is on the African Plate border, in fact precisely on the plate border, all indications are that a bomb took the plane out. How else to explain the lack of a distress signal and the reports of a flaming object?

An Electro-Magnetic Pulse can take everything out, interfering with all electrical activity in its path. The radio equipment, the jet engines, the ability of the pilots to maneuver the aircraft – all are stopped dead. Explosions happen when the jet engines have fuel aflame that cannot vent, as the jet blades are stopped. Explosions in first this and then that side of the plane will cause the swerve observed on radar.  This will, of course, be blamed on a bomb, as the airline industry will not allow discussion of EMP to dampen their profits.

The mystery of what caused EgyptAir flight MS804 to crash has continued to deepen – with new reports claiming an unidentified flying object (UFO) was spotted in the region where it went down.

The Airbus 320 was carrying 66 passengers and crew from Paris to Cairo when it crashed on Thursday morning last week.

It is believed smoke or a fire was detected on board but there have been conflicting reports as to whether Captain Mohamed Said Shoukair issued a distress call or not.

Officials investigating the crash are adamant he did not, while unnamed aviation sources say they have information which contradicts this claim.

Now Turkish daily Hurriet reports that two Turkish Airlines pilots say they saw a UFO with green lights pass over their aircraft, a common enough sighting in the profession, but with apparent significance because it occurred on the same day that the EgyptAir plane crashed.

“An unidentified object with green lights passed 2-3,000 feet above us. Then it disappeared all of a sudden. We are guessing it was a UFO,” the pilots are alleged to have told the Air Traffic Control Centre at Istanbul’s Ataturk Airport.

Some personal belongings and other wreckage recovered from the crash scene
The UFO was reportedly seen flying at around 17,000 feet in Istanbul’s Silivri district during a flight from Bodrum to Istanbul.

EgyptAir flight MS804 crashed in the Mediterranean Sea, with the first pieces of debris being found located around 180miles north of Alexandria.

The newspaper writes the General Directorate of State Airports Authority had not identified anything on its radar similar to what the pilots described.

As Al Arabiya points out, US President Barack Obama’s former pilot Andy Danziger gave an interview in 2015 in which he said pilots frequently shared such tales and “virtually all pilots believe in UFOs.”

Similarly in 2012 the UK head of Air Traffic Control admitted the skies above Britain are visited by at least one UFO a month.

But Richard Deakin told BBC Radio 4’s Today programme: “It does not occupy a huge amount of my time.”

Nick Pope, a former UFO investigator for the Ministry of Defence also spoke on the programme to reveal around 200-300 sightings a year were reported during his tenure.

“Most of the reports turned out to be misidentification of aircraft lights, weather balloons, meteors and satellites,” he explained.

Meanwhile a senior Egyptian forensics official says human remains recovered from the crash site of the EgyptAir Flight have burns on them and are “very tiny,” which suggests an explosion may have taken place in midair on board the aircraft.

He told the Associated Press the body parts are “so tiny” and that at least one piece of a human arm has signs of burns - an indication it might have “belonged to a passenger sitting next to the explosion.” Source: huffingtonpost.co.uk