An earthquake with an initial magnitude of 8.9 has struck under the sea off Indonesia's northern Aceh province.

The quake triggered a tsunami warning across the Indian Ocean region.

The Pacific Tsunami Warning Center said it was not yet known whether a tsunami had been generated, but advised authorities to "take appropriate action".

The region is regularly hit by earthquakes. The Indian Ocean tsunami of 2004 killed 170,000 people in Aceh.

The US Geological Survey, which documents quakes worldwide, said the Aceh quake was centred 33km (20 miles) under the sea about 495km from Banda Aceh, the provincial capital.

It was initially reported as 8.9 magnitude but was later revised down to 8.7 by the USGS.

The tsunami centre's warning said quakes of such a magnitude "have the potential to generate a widespread destructive tsunami that can affect coastlines across the entire Indian Ocean basin".

The tremor was felt as far away as Singapore, Thailand and India.

Reuters reports that people in the region were making their way to higher ground.

The BBC's Karishma Vaswani in the Indonesian capital Jakarta says there were reports of the ground shaking for up to five minutes. Contact with people in the immediate area around the quake has not been possible so far, says our correspondent.

Indonesia straddles the Pacific Ring of Fire, a zone of major seismic activity.

Comment by Nancy Lieder
New ZT early on this matter, with graphics interspirsed.

Several facts quickly became obvious after the magnitude 8.9 quake on April 11, 2012 off the coast of Sumatra. First, the tsunami experienced on December 26, 2004 did not repeat. In 2004 the plate holding India lifted, thus displacing a massive amount of water in all directions, and thus the tsunami and high death count. In 2012 the plates slide along each other, with at most a temporary void along the plate borders causing buoy 55015 to show an amazing temporary drop 65 meters (195 feet). This did not result in a tsunami because the water merely roiled in the void and then found its level, and did not travel to the side to disburse. The second fact emerged by the next day, on the IRIS charts. The West Coast of the US had numerous substantial quakes, a continuing adjustment following the magnitude 7.9 near Acapulco, but clearly more than this was involved. The plates WORLDWIDE were adjusting. Look at the buoy chart. Buoys on alert are doing more than outlining the Sunda Plate. They are outlining the folding Mariana Plate, and the rising eastern edge of the plate holding Australia. The quakes on the IRIS chart show quakes on either side of Africa also, as that plate adjusted. But the big surprise was the amount of adjustment in the northern Pacific, between the West Coast of the US and Mexico and Japan and the folding Mariana Plate. What occurred during the Sumatra quake was a shifting to the west of the plate holding India, such that there were those small voids along the plate border with Sumatra announced by the buoys.  This does indeed relate to the crack occurring just days before along the suspension bridge up in the Himalayas along the Thailand/India border. Africa had been edging to the west also, as the Atlantic spread, and this allowed the plate holding India to make this move. During this adjustment, any snags holding the folding Mariana Plate back were eased, and both the Mariana and Philippine plates gave in to the pressure from the Pacific. This allowed the southern part of the N American bow to shift further west also. 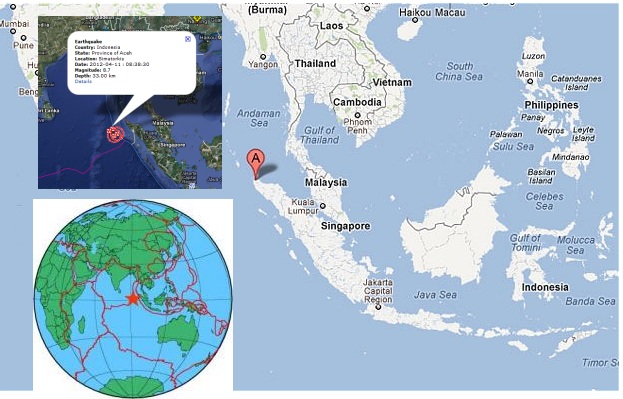 Did we not predict that the spreading Atlantic would allow a dropping and twisting Africa to fall into the increasing VOID in the Indian Ocean? Did we not predict that Mariana and Philippine plates would tilt and fold during the 7 of 10 scenarios? Why else are the buoys in that region on alert, so far from the slip-slide to the west of Sumatra? Did we not predict that the N American continent would tighten into a bow as the 7 of 10 plate adjustments proceeded? Here we have the entire West Coast from Vancouver to Acapulco suddenly having significant quakes. We stated the plates had been loosened, and were on the move. Our 7 of 10 predictions have become a FACT.

THIS BULLETIN IS FOR ALL AREAS OF THE INDIAN OCEAN.

... AN INDIAN-OCEAN-WIDE TSUNAMI WATCH IS IN EFFECT ...

A TSUNAMI WATCH REMAINS IN EFFECT FOR

THIS BULLETIN IS ISSUED AS ADVICE TO GOVERNMENT AGENCIES. ONLY
NATIONAL AND LOCAL GOVERNMENT AGENCIES HAVE THE AUTHORITY TO MAKE
DECISIONS REGARDING THE OFFICIAL STATE OF ALERT IN THEIR AREA AND
ANY ACTIONS TO BE TAKEN IN RESPONSE.
N EARTHQUAKE HAS OCCURRED WITH THESE PRELIMINARY PARAMETERS

EARTHQUAKES OF THIS SIZE HAVE THE POTENTIAL TO GENERATE A
WIDESPREAD DESTRUCTIVE TSUNAMI THAT CAN AFFECT COASTLINES ACROSS
THE ENTIRE INDIAN OCEAN BASIN.

HOWEVER - IT IS NOT KNOWN THAT A TSUNAMI WAS GENERATED. THIS
WATCH IS BASED ONLY ON THE EARTHQUAKE EVALUATION. AUTHORITIES IN
THE REGION SHOULD TAKE APPROPRIATE ACTION IN RESPONSE TO THE
POSSIBILITY OF A WIDESPREAD DESTRUCTIVE TSUNAMI. WE ARE STILL
WAITING FOR CONFIRMATION OF TSUNAMI FROM NEAREST SEA-LEVEL
STATIONS.

ESTIMATED INITIAL TSUNAMI WAVE ARRIVAL TIMES AT FORECAST POINTS
WITHIN THE WARNING AND WATCH AREAS ARE GIVEN BELOW. ACTUAL
ARRIVAL TIMES MAY DIFFER AND THE INITIAL WAVE MAY NOT BE THE
LARGEST. A TSUNAMI IS A SERIES OF WAVES AND THE TIME BETWEEN
SUCCESSIVE WAVES CAN BE FIVE MINUTES TO ONE HOUR. 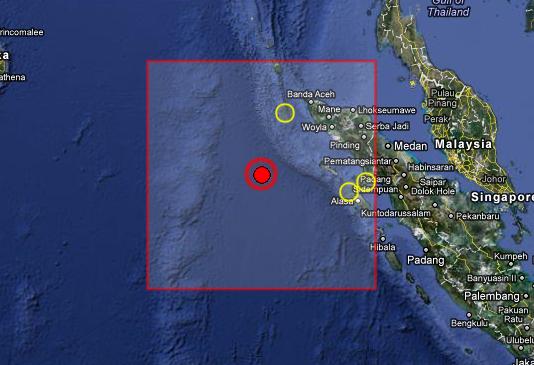 Indonesia’s geophysical agency has registered an 8.9 magnitude earthquake in the Aceh region, off the coast of northern Sumatra. A tsunami warning has been issued, the US Geological Survey reports.

The Pacific Tsunami Warning Centre is monitoring the situation in the Indian Ocean.

The closest city to the quake’s epicenter, which lies 33 km beneath the ocean floor, is provincial capital Banda Aceh. With a population of over 220,000, it’s located some 500 kilometers away.

Tremors from the earthquake have been felt in Singapore, Thailand, Malaysia and southern India. Witnesses said on Twitter that high-rise apartments and offices on Malaysia's west coast shook for at least a minute.

Indonesia straddles a series of fault lines that makes the vast island nation prone to volcanic and seismic activity.

In December 2004, a giant 9.1 quake triggered a tsunami in the Indian Ocean that killed 230,000 people, nearly three quarters of them in Aceh.