Today, Nov 6, 16 major US internet hubs are down. I work in a computer lab and a lot of people have been complaining all day about the internet being slow and unresponsive. As well as people complaining in a couple of forums that I saw. What’s the cause? Does it have anything to do with the Puppet Master, the Zetas and preventing voter fraud? Here’s a link http://www.internettrafficreport.com/namerica.htm, but it’s not a static list, so the information will change eventually. [and from another] http://en.wikipedia.org/wiki/Packet_loss Some network transport protocols such as TCP provide for reliable delivery of packets. In the event of packet loss, the receiver asks for retransmission or the sender automatically resends any segments that have not been acknowledged. Although TCP can recover from packet loss, retransmitting missing packets causes the throughput of the connection to decrease. This drop in throughput is due to the sliding window protocols used for acknowledgment of received packets. In certain variants of TCP, if a transmitted packet is lost, it will be re-sent along with every packet that had been sent after it. This retransmission causes the overall throughput of the connection to drop. 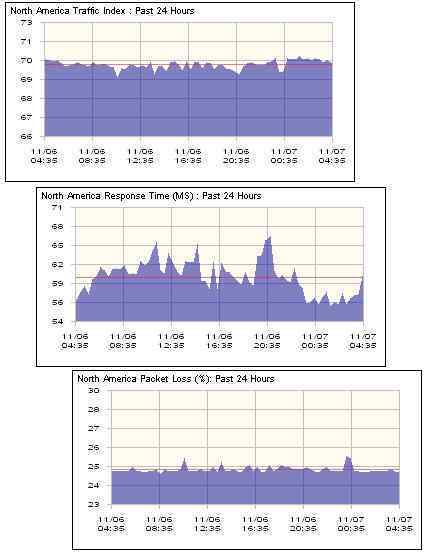 The Internet functions at the level it does because there are many routes for a packet to travel, so that if one route fails, another is tried. Then the packets are pieced together on the receiving end. The Internet  also repeats a send if a packet is damaged or not received. There is a conversation going on where the sending site anticipates a return receipt, and it if does not get it, retries. Clearly, as electromagnetic surge and brownout occurs during wafting of the charged tail of Planet X, Internet traffic from Earth to satellite and back again can experience damaged packets. Earthbound electronics can also falter or be glitched. If static occurs on phone lines or via satellite cable TV, Internet packets can be damaged. The Earth wobble also affects traffic, as satellites will not be where expected periodically, requiring a search to align with the satellite repeatedly during the day.

The overall effect of this interference is to slow down traffic, as lost or damaged packets need to be resent, repeatedly. If there are missing packets at the receiving end, sometimes the whole conversation needs to be re-instituted. This situation will only get worse, as satellite failure is also a factor. We have predicted increasing satellite failure from electromagnetic blasts, whereby a satellite is damaged to the extent it is taken out of service. This has already been a factor, though not discussed in the media due to the cover-up over the presence of Planet X. Will Internet traffic be restricted if slowdowns become onerous? Certainly streaming movies would be the first to go!

MOSCOW, November 14 (RIA Novosti) - A severed communications cable in the Moscow region on Wednesday has rendered Russian specialists unable to control most of the country's civilian satellites, a source in the space industry said.

It will take at least 48 hours to fix the problem, the source said.

Comment by Weston Love on November 11, 2012 at 3:28pm
Last night the internet was entirely unresponsive for me. I have also been noticing shooting stars becoming more common