I know that majority places in the world will be in very unimaginably devastating states during PS, and some even before that. I'm aware of the dangers of gas and oil pipelines during those times. But would you be willing to describe a little bit more about the extent of what will happen with inland and offshore gas and oil pipelines during a 7 in Indonesia with plate movements and volcanic eruptions going on? (And there's also a Yapen community in Papua who are still anxious with government plan for oil exploration in cooperation with a Canadian oil company.) 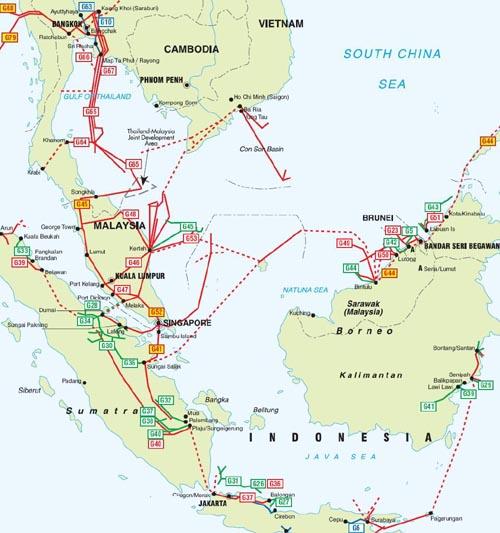 During any plate or ground movement, any earthquake jolts, mankind's gas and oil pipelines and refineries are subject to rupture and explosion. This is a given. The pipelines throughout Indonesia primarily supply major cities - Singapore, Bangkok, and Jakarta. Indonesia is not considered a major oil producing country, nor are vast reserves been found there. In the main, it produces the natural gas it requires and is a minor player in the natural gas export business. Thus during the 7 of 10 plate movement, which will sink Indonesia up to 80 feet lower than it is today, explosions from gas pipelines will be the only pipeline worry. Pipelines sense a drop in pressure and shutoff valves close them off. Thus, during the earthquakes that will accompany the dropping of the tongue of Indonesia, this will occur during any fracturing of the pipelines. Rigs pumping gas from under the seas will be dragged under the waves, and pumping will stop.

Over 16 hectares of coral reef at risk in Gulf of Thailand - ANNOve... 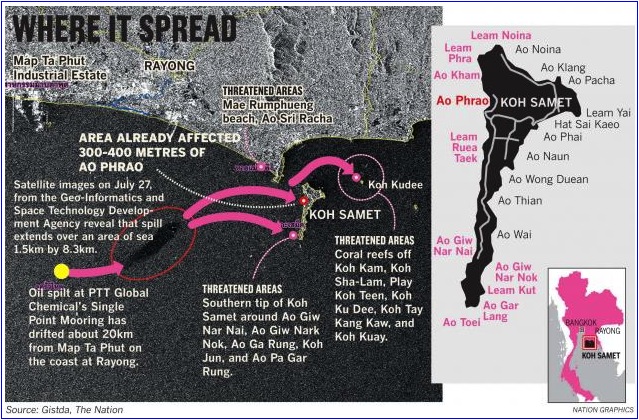 More than 100 rai (16 hectares) of the staghorn and giant clam coral reef surrounding Kudee Island, 6 kilometres to the east of Samet Island, is now threatened by the oil spill if efforts to contain the leak fail.
Theerapat Prayoonsith, deputy director-general of the Department of National Parks, Wildlife and Plant Conservation (DNP), said he had instructed officials to set up a 24-hour surveillance centre to monitor the spread of the oil in the Gulf of Thailand.
"We are monitoring three key spots around Samet. We are worried that hundreds of rai of the most precious coral reef - which is one of the top tourist attractions - will be severely damaged if the control measures put in place by PTT Global Chemical [PTTGC] fail," he told The Nation.
Sumet Saithong, chief of the Khao Laem Ya-Mu Koh Samet National Park, said it would be almost impossible to revive the coral reef if the spread is not contained.
"That would be the worst incident for us," he said.
10 tonnes of oil recovered
As of 8pm on Sunday, oil had covered up to 400 metres of the white sand beach at Phrao Bay on the west of Koh Samet.
Sumet said he told officials to close the beach for three days so it can be cleaned and that he had informed PTTGC of the incident. He said little could be done to protect the beach. Meanwhile, a PTTGC representative said it would take at least 15 days to clean up the area.
Early yesterday, thousands of volunteers and navy officials got together to help mop up the spill. PTTGC representatives joined them in the afternoon.
Rayong Governor Wichit Chatphaisit said pumps, buckets and shovels were used to suck oil out of the sand and the debris stored in plastic bags.
PTTGC environment officer Surajit Satapornwalairat said the recovered oil would be stored first in tanks before being eliminated at the Siam City Cement factory in Saraburi.
As of yesterday evening, about 10 tonnes of oil had been recovered from the beach.
Meanwhile, Wichit said he was still worried about the containment mission at Phrao beach because southeasterly winds could blow the crude oil surrounding Phrao Bay into the sea, making it difficult to control the spread to other areas.
Separately, Sumet said the Natural Resources and Environment Ministry had sent a team of environmental and pollution experts to estimate the damage done to the marine ecosystem around the island. 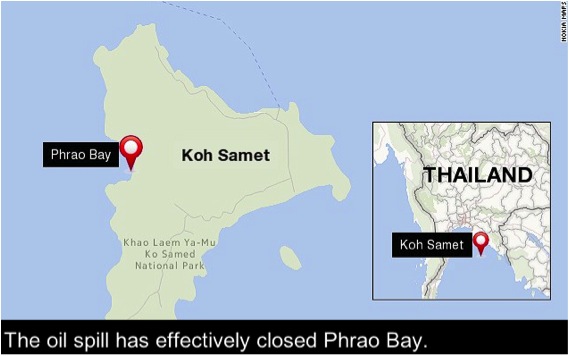 BANGKOK (AP) — Black waves of crude oil washed up on a beach at a popular tourist island in Thailand's eastern sea despite attempts to clean up the oil up over the weekend after it leaked from a pipeline, officials said Monday.

Tourists on Samet island were warned to stay away from the once-serene beach, marred by inky globs as hundreds of workers in white jumpsuits labored to scrape the sand clean and remove oil from the water.

About 50 tons of oil spilled into the sea off Rayong province on Saturday morning from a leak in the pipeline operated by PTT Global Chemical Plc, a subsidiary of state-owned oil and gas company PTT Plc.

Streaks of crude oil about 300 meters (1,000 feet) wide marred the shore of Prao Bay on Samet Island, one of the most popular beach destinations for Thai and foreign tourists in the Gulf of Thailand, Rayong Deputy Gov. Supeepat Chongpanish said Monday.

He said authorities closed the bay as 300 workers attempted to remove the oil from the white beach and the water.

"The top priorities right now are to get rid of the oil on the sand and the seawater, and to make sure the spill doesn't spread to other shores," Supeepat said. "This is a very beautiful, white, sandy beach, so we want to make the spill go away as soon as possible."

"The black waves started rolling in since last night and by the morning the beach was all tainted with oil," said Kevin Wikul, the assistant front desk officer at a resort in Prao Bay. "We have advised our guests against going near the beach and some of them have asked for early check-outs."

The nearby area has been declared a disaster zone by provincial authorities, and those affected by the spill will receive immediate assistance.

The company said it detected a leak when crude oil from a tanker moored offshore was being transferred to the pipeline, 20 kilometers (11 miles) from a refinery in Map Ta Phut, one of the largest industrial estates in Southeast Asia.

The company said in a statement Sunday that it has flown in oil spill management experts and a plane from Singapore to remove the crude oil. Thai navy vessels also joined the cleanup efforts.

Authorities said it would take some time to assess the environmental damage.

"The spill is definitely having an impact on the environment, but we have not detected any deaths of marine animals yet at this point," provincial Gov. Wichit Chatphaisit said. "PTT will have to take responsibility for the damage this has caused."

He said pollution control department officials had expressed concern about the effects of the chemical used to clean up the spill.

PTTGC apologized for the incident and said the cleanup will likely be completed within three days.

"We acknowledge this incident has damaged our reputation and we will not let it happen again," CEO Anon Sirisaengtaksin told a news conference.

In 2009, another PTT subsidiary was involved in the Montara oil spill, one of Australia's worst oil disasters, in the Timor Sea off western Australia.