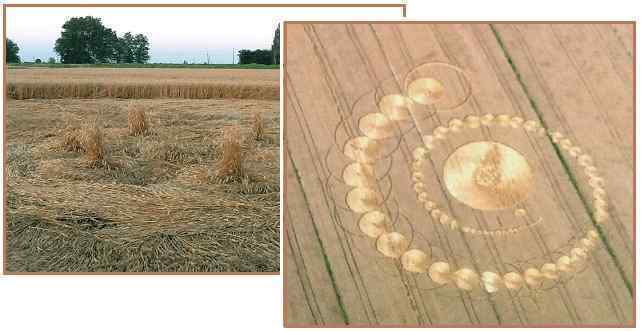 A new Crop Circle appeared at Fabbrico in Italy in June 25. This Crop Circle looks different from other Crop Circles which appeared in the past few days. So if it's a true Crop Circle, what message is present?
http://www.cropcircleconnector.com/inter2012/italy/Fabbrico2012a.html

This is a genuine crop circle, as one can see from simply examining the weaving of the grain. There are intricacies such as thin line circles that end at the edge of another thin line circle, with no overlap. There is a deliberate break in the swath of circles also, where the field has broken grain, arranged so that the intent of the design uses the landscape, rather than fights against it. But it is the weaving of the grain, within the central circle, that shows this is a legitimate design and not a fraud. In the very center there are multiple tuffs each with a circle swirl around it, but the grain also continues to swirl in the larger circle, not something a fraud would accomplish.

What is the meaning of this design? Planet X has a retrograde orbit and this design shows this clockwise progression. When viewed from Earth, as is shown on the Path diagram Nancy developed from the details we provided at the start of the ZetaTalk saga in 1995, Planet X appeared first to sling left, then up, then right, then down before arriving at where it could be seen naked eye in the sky in March, 2003. Then the break in the circles where thin line circles begin. This break indicates a break in time, from 2003 until the passage. Going into the passage, Planet X will grow in size, looming as large as the Moon or the Sun in the sky, while also continuing in its retrograde orbit so it will align in front of the Sun, rather than to the right of the Sun in the view from the Northern Hemisphere as it does today.

Thanks for the post Gerard.  The crop circle looks like the tail of the scorpion encircling Earth.