Quake swarm happening east of San Diego in the Salton Sea.  60 quakes in the past day, the largest a 4.6, 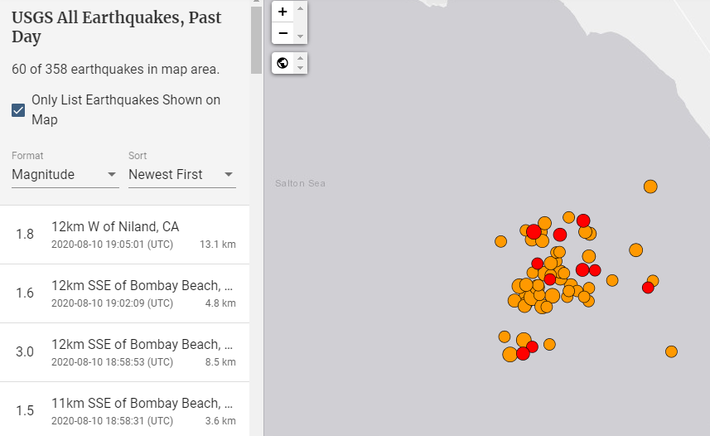 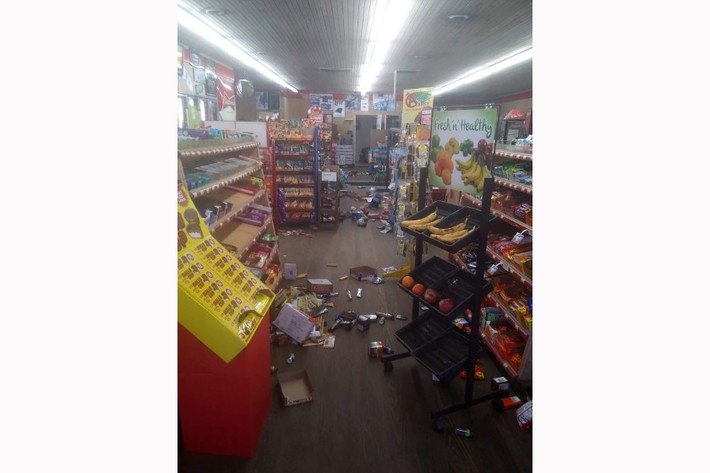 The most powerful earthquake to hit North Carolina in more than 100 years shook much of the state early Sunday, rattling homes, businesses and residents.

There were no immediate reports of damage or injuries.

Michael Hull was standing in his driveway at his home in Sparta when he noticed a group of deer running.

“Not even a minute passed and the side-to-side motion started,” Hull said. “It takes you a minute to realize what’s happening, and you just can’t believe it. Then it was over. It was loud, like God was shaking a mountain at you, literally.”

Karen Backer was in her Greensboro apartment when she initially mistook banging in her kitchen for her roommate.

“Nope, it was the cabinet doors ‘clinking’ open and closed! My neighbors on the other hand said they felt our apartment building shaking,” Backer said. “Well, sadly, nothing surprises me in 2020, but a hurricane and an earthquake in the same week is crazy.”

It was the largest earthquake to hit the state since 1916, when a magnitude 5.5 quake occurred near Skyland, the weather service said.

The U.S. Geological Service said the quake’s epicenter was about 2.5 miles southeast of Sparta, just south of the Virginia-North Carolina border. The USGS said the population in the affected region resides in structures “that are resistant to earthquake shaking, though vulnerable structures exist.”

The quake was felt in nearby states including Virginia, South Carolina and Tennessee.

Tokyo residents were rattled Thursday morning after an alert broadcast to smartphones across the capital warned of an impending magnitude 7.3 earthquake about to hit the capital -- only for no quake to arrive.

The alert at 9:38 a.m. was a false alarm, caused by a system designed to give residents precious seconds to protect themselves before an earthquake hits, which overstated the magnitude of a smaller temblor, the Japan Meteorological Agency said.

The system mistook the epicenter of a magnitude 5.8 earthquake off Japan’s coast, calculating it to be about 450 kilometers (280 miles) further away. That caused it to overestimate the size of the quake and trigger the alert. The warning was issued to Tokyo and 14 other prefectures -- areas that account for about half of Japan’s total population of 126 million -- and halted trains and subway lines in the capital for hours.

The quake was far enough from shore that no shaking was felt in Tokyo or the surrounding regions.

Japan’s early warning system is designed to issue alerts when an earthquake is first detected. When a temblor of a certain size is detected, warnings are issued to smartphones, TV networks and factory lines, and trains are automatically halted, to give people time to prepare before more damaging secondary-waves strike.

Smartphones in Japan generally have the alert enabled by default, which will override mute settings with a loud warning noise. Tokyo residents, who have long expected the arrival of the “Big One” -- a quake directly hitting the capital area -- are also on edge due to the growing coronavirus pandemic.

Earthquake in Alaska: Trail of headlights as a community evacuates just hours before the threat of a tsunami is called off without any damaging waves following 7.8 magnitude quake off the coast

22 July 2020
The shallow quake struck at 6.12am Wednesday and triggered a tsunami warning
It hit around 500 miles southwest of Anchorage and 60 miles south of Perryville
A distance of 200 miles surrounding the epicentre is at risk of a tsunami
People living in Homer, Alaska, were evacuated by the threat has now subsided

A trail of headlights has been photographed along the Alaskan coast after a community was told to evacuate this morning - but the tsunami warning has now faded without any dangerous waves.

A 7.8-magnitude earthquake struck off the coast of Alaska - putting nearby coastal settlements at risk of a tsunami.

Those in Homer, Alaska, were pictured driving along a coastal road as they tried to get out of the at-risk area.

The shallow six-mile wide quake started at 6.12am GMT on Wednesday, or 11.25pm PST on Tuesday.

It was felt as far away as Anchorage, a distance of 500 miles, and hit around 60 miles south-southeast of the remote settlement of Perryville, according to the US Geological Survey.

The earthquake had a depth of six miles.

Terrified residents heard warning sirens amid fears they would be swamped by a tsunami and evacuations quickly began in the early hours of Wednesday morning.

The United States Geological Survey said a warning was in effect for South Alaska and the Alaska Peninsula.

They said that tsunami activity could hit within the next hour at points along the Alaskan coast. CONTINUE...