That means there are 3 hurricanes in the pacific right now one by Japan, one by Hawaii and another by the W. coast of S. America
http://earth.nullschool.net/#current/wind/isobaric/850hPa/orthograp...  [and from another] http://thevane.gawker.com/at-200-mph-hurricane-patricia-is-now-the-...  With measured winds of 200 MPH, Hurricane Patricia became the strongest tropical cyclone ever recorded anywhere on Earth. The previous record-holder for the strongest tropical cyclone ever recorded anywhere on Earth—by wind speed—was Super Typhoon Haiyan, which struck the Philippines with satellite-estimated, one-minute sustained winds of 195 MPH. Hurricane Linda held the old wind record for the eastern Pacific Ocean, packing 185 MPH winds back in 1997. Over in the Atlantic, 1980’s Hurricane Allen still holds the wind speed record, packing one-minute sustained winds of 190 MPH at one point during its life cycle. During the 24-hour period between 4:00 AM CDT on Thursday and 4:00 AM CDT on Friday, Patricia went from an 85 MPH category one to a 200 MPH category five. 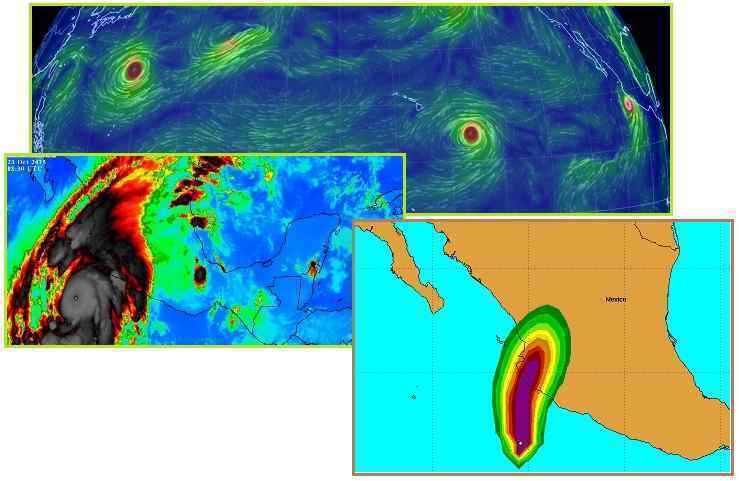 Knowing that the Earth wobble would begin after Nibiru entered the inner solar system in 2003, and knowing that the Earth wobble would worsen as the Last Weeks approached, we predicted that the ferocity and frequency of storms would increase. We made this prediction at the start of the ZetaTalk saga in 1995. In 2005, when this prediction proved correct, the increase in ferocity and frequency of storms of record, we repeated this prediction and added that storms will begin to follow each other and even slam into each other, magnifying the effect. Again in 2013 we predicted that storms will be on the increase, and stated that if this causes the populace to move from the coasts, it may be a blessing in disguise.

As cyclone Patricia suddenly increases in ferocity and approaches the Mexican coastline, there are two other storms in the northern Pacific. This cannot be ascribed to anything but the Earth wobble, which will increasingly kick a cyclone into a higher gear and at the same time create a void in the air pressure that will provide the breeding ground for another cyclone. The establishment has predicted a mega El Nino, which of course comes from the submarine volcanoes heating the Pacific, and this feeds the development of storms too. What will be the outcome? We predicted that some coastlines will become uninhabitable, used only for crops as the time of the passage approaches. This is at hand!