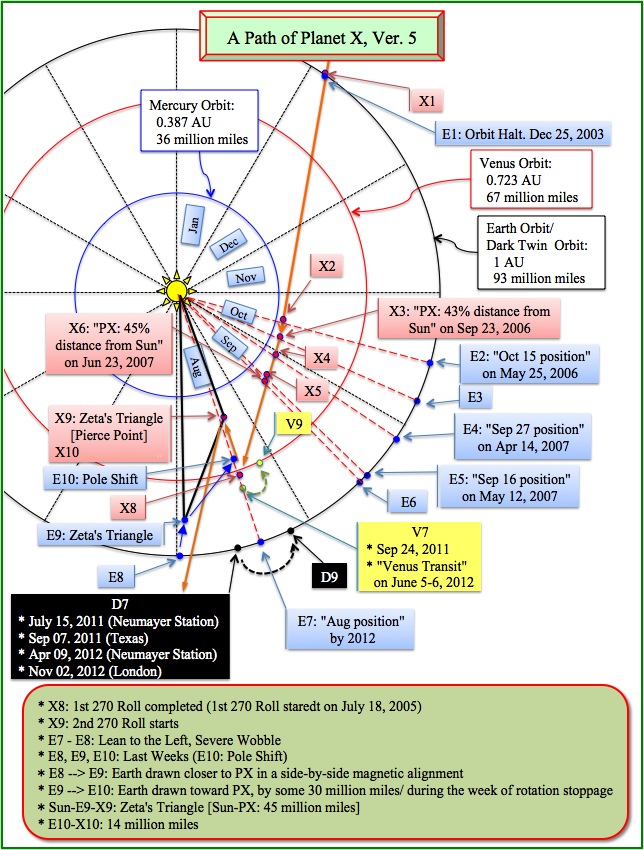 Note that the N Poles are indicated by a blue color, the S Poles by a red color, in accordance with the color scheme for magnetic poles used by the non-western half of the world, including China, Tibet, Turkey, southern Russia and Russia's Far East, Mongolia, and northern Japan. The west uses a scheme which is the opposite. 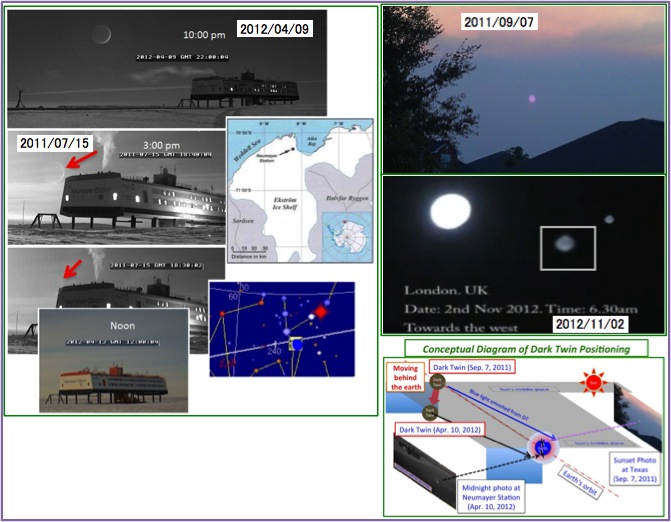 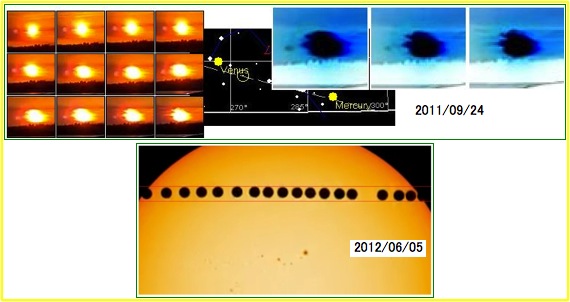 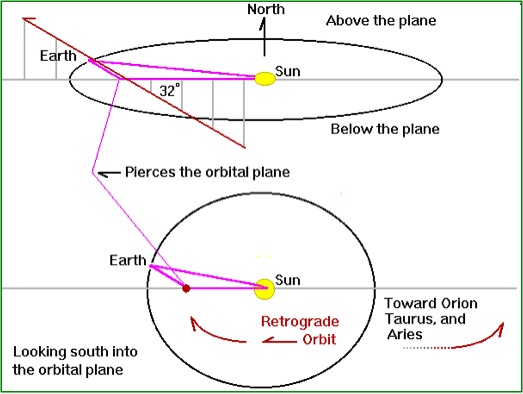 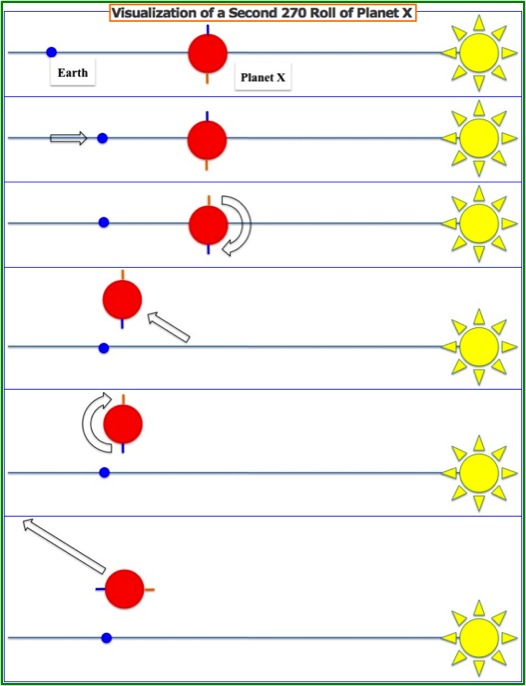 [ZetaTalk about a path of Planet X]

We have described the location of Planet X since 2005 as being within the orbit of Venus and moving slowly outbound (X2-X6).  It is moving in a retrograde orbit, pushing the Earth back from when it was stopped in its orbit in 2003 in the December position (E1). It was in the September position in 2009 and then by 2012 had moved to where it will remain until the Pole Shift -  the August position. Meanwhile, the cup has tightened. Venus has pushed closer to the Earth, the Dark Twin has fallen behind the Earth and is trying to pass the Earth in their shared orbit, and the Earth’s wobble has gotten more severe and violent. It is the very crowding of these planets in the cup in front of Planet X that causes the slow pace of Planet X as it tries to move outbound away from the Sun in its retrograde orbit.
We will not detail the drama that will take place between the present and the Last Weeks, when the deadlock will suddenly be broken. At that time, Venus and the Dark Twin escape from the cup (V9, D9), allowing the final gyrations between Planet X and the Earth to begin. We have stated that Planet X will draw the Earth some 30 million miles closer to it in the Last Weeks, though this will be primarily a sideways motion, not toward the Sun (E9 --> E10).  Earth at this point is pressed as far to the left as possible, pressed into the Lean to the Left and the Severe Wobble. This does not place the Earth in danger of contact with Planet X or its Moon Swirls, as it still remains some 14 million miles from Planet X (X10-E10) and the moons in the Moon Swirls remain no further than 5 million miles from Planet X.
Where will Planet X be between the present and the Last Weeks? We have stated that Earth will not be pushed back in her orbit further than the August position, and she is there now (E7-E8). We have stated that Venus and the Dark Twin are unlikely to escape prior to the Last Weeks, though will be pressed more closely together in the cup. Both will certainly loom larger than they are at present. Planet X will progress past the orbit of Venus (X8), but not by far during this time. Just what sights and drama the poor Earth and her inhabitants will be subject to during this time is part of the 8 of 10 scenarios, which we are withholding at the present time.

We have hinted that high drama will occur during the passage, not yet detailed by ourselves and thus a surprise to the establishment. We hope for the establishment to be discombobulated, so that the cover-up shatters and the truth is blurted out by the media. The approach and exit of Planet X is often depicted in crop circles as increasing and then decreasing circles, the size of Planet X as viewed from Earth. At first, as infinitesimal as a dim star, but at passage as large as the Sun due to its dust cloud and writhing moon swirls. We have stated that Planet X pierces the Ecliptic at approximately the half way point between the Earth and the Sun, 45 million miles or so (X9).

At this point, it stands upright and draws the Earth close to it, for a distance of 14 million miles (X10 - E10). At this point, the slowing of Earth's rotation to a stop occurs. This would all seem to imply that a single approach of Planet X to the Earth occurs, as then, after the pole shift, Planet X zooms on out of the solar system. The Eastfiield crop circle implies that Planet X draws near (X8 - E8, 9), then retreats (E9 - X8, 9), then draws near again (X9 - E9, 10) during a severe wobble where it seems to be in two places at once in the sky, then draws the Earth close during the rotation stoppage (X10 -E10), then takes off again. At present, Planet X lies close to the Sun in the line of view, so close as to be lost in the glare. Planet X is closing the gap, coming ever closer and will come near enough to be visible to many on Earth. But as we have explained, the Point of Passage places Planet X further from the Earth (X9-E9), the angles of the ZetaTalk Triangle (Sun-E9-X9) which appeared in two Wisconsin crop circles on July 4, 2003. As Planet X swings its N Pole toward Earth, there is a clash, the N Pole of Planet X wanting to evade the N Pole of Earth, and vice versa. Thus, Earth pushes back in her orbit as far as possible (E7 --> E8), creating this distance, so that Planet X will diminish in size (X8 - E7, 8). Nevertheless, Planet X is still coming closer, closing the gap, more distance from the Sun, less distance from Earth, even though offset to the right. How will the establishment explain a temporary appearance of Planet X in the sky, followed by a diminished size offset to the right of the Sun, then a reappearance of Planet X in the sky along with a severe wobble? A dancing asteroid? A permanent solar flare that dances around the Sun? And what of the wobble?

Early in the ZetaTalk saga we gave what is known as the passage triangle, describing where Planet X, the Earth, and the Sun would be at the Point of Passage (Sun-E9-X9). We also gave a statement during the search for Planet X in the night skies on how close the Earth and Planet X would come to each other at the point of passage -14 million miles(X10 -E10). We have also stated that the Earth is drawn in toward Planet X during the week of rotation stoppage, by some 30 million miles (E9 -E10). But we did not state that the Earth was drawn 30 million miles closer to the Sun (E9 -E10). What is not clear is where Planet X is during this drama. It is clear that the Earth will have pulled as far to the left as possible (E7 --> E8), to escape the magnetic hosing coming from the N Pole of Planet X which is otherwise pointed toward the Earth. This hosing is what drives the Earth to flop on its side, lean to the left, and swing away into 3 days of darkness prior to rotation stoppage. Presumably Planet X continues outbound (X8), as prior to the week of rotation stoppage Venus has escaped from the cup (V9). Today, Planet X is within the orbit of Venus, so clearly it will make progress prior to the last week. Simple math would lead one to believe that Planet X remains at the point where it is today, as 44 million miles is halfway between the Earth and Sun, and 30 million miles and 14 million miles equates to that distance. But Planet X is to the side, so the movement toward Planet X is not directly toward the Sun. It is toward a Planet X which is far to the right! This is one reason for the visibility of Planet X during the last weeks, particular the lastweek - rotation stoppage. There is less distance to Planet X than ever before.

Does Planet X continue to take a straight path outbound from the Sun, pushing the Earth about during this process? At present, there is a virtual standoff, with 3 planets in front of Planet X - Earth, the Dark Twin, and Venus. The Dark Twin and Venus are not expected to escape this squeeze until the Last Weeks, but as Planet X comes closer, the magnetic clash between the Earth and Planet X intensifies. This is always assumed to be a drama for the Earth, though we have dropped hints along the way that some of this drama affects Planet X. We have stated that Planet X comes close, then retreats, then comes close again as the Last Weeks approach.

Planet X undergoes its second 270⁰ roll prior to the Last Weeks, as when it pierces the Ecliptic it is forced to throw its S Pole upward, going into opposition along the Sun's magnetic flow lines above the Ecliptic. When Planet X itself goes into opposition, it is snapped back closer to the Sun, as it is now not resisting the N Pole of the Sun, and can tolerate the stronger flow of magnetons in the field closer to the Sun. Magnetic fields both push away and draw bodies closer, so this should not be an astonishing fact. The sequence of events is thus

1. PX continues in its straight line path (X6 --> X8),  creating a more violent wobble in the Earth (E7) and appearing more visible in the skies, also squeezing Venus toward the Earth to loom large (V8), as PX will be coming outside the orbit of Venus at that time (X8) and press the Earth far to the left of the August location (E8).

2. PX is close enough to the Ecliptic that it suddenly flips into opposition, pointing its N Pole to the South and S Pole upward, drawn closer in toward the Sun (X8 --> X9). Here it is in position to form the ZT Triangle (X9), though the Earth has not yet been drawn toward PX (E8).

3. During the jump in toward the Sun for the second 270 roll, PX has given the crowded planets around Earth a chance to escape. The Dark Twin, which has falled behind the Earth, moves forward in their shared orbit (D9). Venus is almost thrown forward in her orbit by the Repulsion Force (V9), having been pushed too close to the Earth during the squeeze.

4. The Earth now has fewer barriers between herself and PX, and is drawn closer by magnetic attraction. She travels 30 million miles closer to the Earth (E9 --> E10). Rotation slowing to a stop occurs.

5. PX continues its outbound path, and finding the distance from the Sun allowing it to begin to form a side-by-side alignment again, starts to pull its N Pole up and this is the process that causes the PS for Earth, grabbing the S Pole of Earth and jerking it upwards by 90 deg.

I did up a new YouTube video, the Zeta Report series, going through this diagram step-by-step.