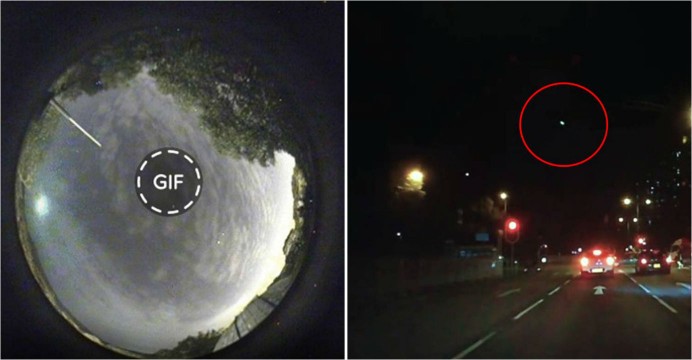 A fireball was seen streaking over Hong Kong skies on Saturday night, with multiple Facebook posts suggesting that the ‘bolide’ meteor was seen by netizens in Yuen Long, Tai Po and Sheung Shui.

Some netizens said they mistook the bright flying object emitting green light for an airplane or a drone. Others said it could have been a UFO (unidentified flying object), Headline Daily reports.

A video clip from a dash cam shows the fireball streaking across the sky from left to right at a moderate speed for about five seconds.

The Hong Kong Observatory later confirmed on its Facebook page that the phenomenon was captured by a camera from the Hong Kong Space Museum’s Sai Kung iObservatory at 10:42 p.m.

Initial analysis suggested that the meteor was not part of a meteor stream, forecast to be active between April 19 and May 28, according to Apple Daily.

Yu Wai-chun, former president of the Hong Kong Astronomical Society, said a “bolide” meteor is usually larger burns when it enters the atmosphere.

Thus people often see it as a fireball, he said. BASTROP, Texas (KXAN) — For the past two years, Aaron Olmsted has had a dash camera mounted in his car. He says he has it because he drives a quick car and the camera comes in handy in certain situations.

But early Friday morning was the first time his camera ever captured a fireball streak across the sky in Bastrop. Olmsted and his wife were driving back to their Bastrop home from the Austin airport around midnight when they noticed the bright light.

“We both spotted it,” says Olmstead. “My wife was driving, and I was in the passenger seat and we both saw it and we were both amazed.”

The couple said they’re not sure if anyone else saw what they saw because it was late and there weren’t that many people driving on State Highway 71 in Bastrop at the time.

“We were basically the only ones on the road last night and it just fell right in front of us. It was real quick,” says Olmstead. “I didn’t know if it were space junk or a meteor because it exploded at the end. It almost did a firework thing at the very end.”

Olmsted says the fireball was a bright white, but right before it exploded it turned a reddish-orange.

If you’re watching the video, you might notice the time stamp indicates the video was filmed in October of 2016, but there’s a reason for that. Olmsted says the Rexing dash camera was new. “My dash camera came in just before I went on the trip, so, I didn’t have time to set the date on it.” 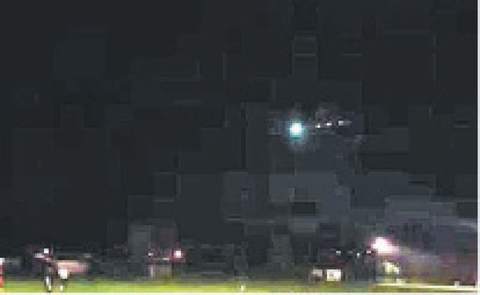 HUNDREDS of people across the district last night got a perfect view of an extraterrestrial visitor, as a meteor briefly entered the atmosphere and exploded in a ball of green light.

“It was like a shooting star then it sort of exploded and fireballed itself a bit further, then it was gone. It was as moving so fast, but so so pretty,” one witness reported to The Gisborne Herald.

Other witnesses said it resembled a “green fireball”, and one said it was the size of “six houses”.

Scores of others also reported the sighting to  weatherwatch.co.nz.

“Biggest brightest comet we’ve ever seen in all our 56 years. Quick and flashy. Seen in awe from Otoko near Matawai,” one report said.

Sightings of the meteor were recorded from 7.15pm onwards, and were noted across New Zealand.

Met Service meteorologist Lisa Murray confirmed there were no unusual atmospheric conditions at the time..."

Keys deputy among those who spotted meteor streaking over South Florida 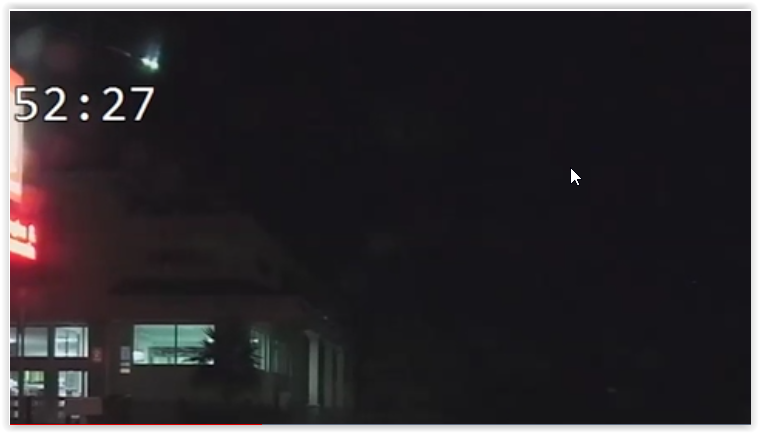 A fireball streaked across the sky overnight, according to multiple reports.

By 4 a.m. Wednesday, the American Meteor Society received nearly 50 reports about the flaming streak in the night sky.

The object was likely a meteor breaking up in the atmosphere. It was visible from the Keys to Port St. Lucie on the east coast and as far north as Tampa on the west coast, reports said.

Among those who spotted and were able to record the fireball was Monroe County Sheriff’s Deputy Sgt. Evan Calhoun. He was on patrol in the Lower Keys, on Big Pine Key, shortly before 11 p.m. Tuesday when his dashcam unit taped the meteor as it streaked across the night sky.

A similar object was spotted in the northern part of the state in November 2016, according to ABC News. Dashcam footage appears to show what looks like a shooting star above Wellington.

A bright light seen shooting across the sky on Wednesday evening is likely to be the first of many, according to a Wellington astronomer.

The light, which most eyewitness accounts describe as bright green and moving extremely quickly, was reportedly witnessed in Wellington, Nelson, and as far south as Christchurch and Dunedin..."

A bright flash of light was seen thundering through the sky on Easter Sunday, with one Toowoomba resident describing it as "breathtaking."

About 6pm residents all over south-east Queensland reported seeing a very large and bright meteor soaring through the sky before residents in Killarney heard a large bang.

Footage taken from Runaway Bay on the Gold Coast clearly shows the bright object heading towards the Great Dividing Range before disappearing.

University of Southern Queensland Associate Professor Jonathan "Jonti" Horner said it was safe to say the bright object was not man-made. 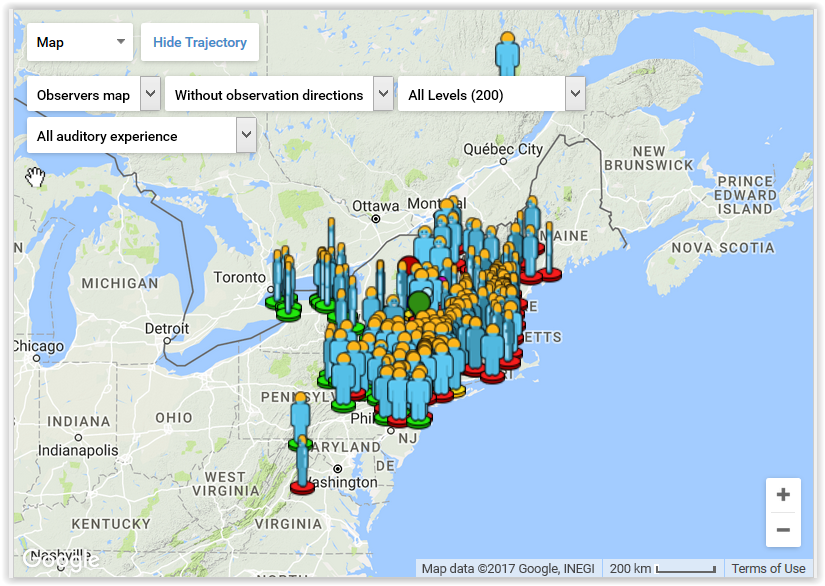 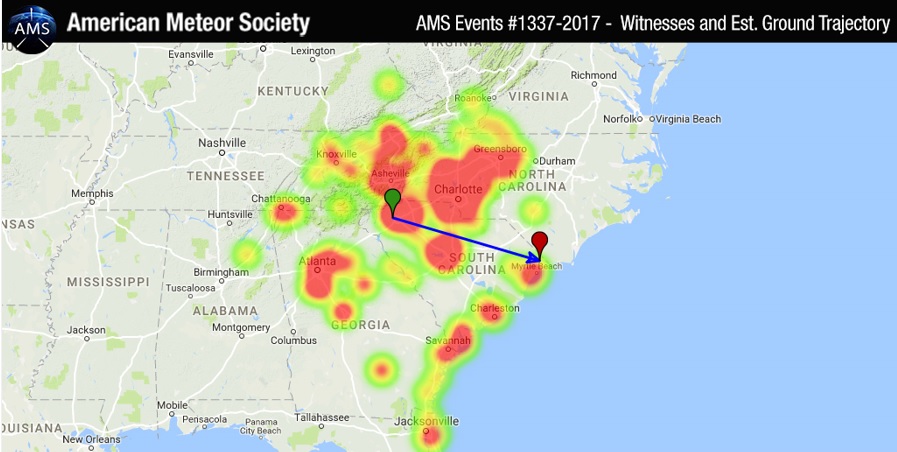 AMS has received over 300 reports of a fireball event seen across South Carolina on Wednesday, April 12th 2017 around 8:45pm EDT (April 13th – 00:45 UT.). The fireball was seen primarily from the South Carolina area but witnesses from several states around also reported the event.

A shooting meteor flashed across the night sky in California, Monday (Apr 10), dazzling onlookers and even managing to video bomb one astonished woman.
https://www.rt.com/usa/384341-fireball-meteor-california-video/
The luminous fireball, described by a number of eyewitnesses as “green”, streaked over San Diego, California at around 9pm local time, according to the American Meteor Society (AMS). The group received reports of more than 400 event sightings, primarily from San Diego but also from Los Angeles, Arizona, Nevada and New Mexico.

Social media lights up over fireball in the night sky

TAMPA, Fla. (WTSP) -- There are social media reports of a fireball over Tampa around 3 a.m. early Sunday morning.

A report on the American Meteor Society webpage confirms a similar possible sighting. According to Antonio Paris, an astronomer at MOSI, seeing meteors flying across the sky isn't unusual.

If you look up at the night sky, Paris said you could see a meteor almost every night if it's clear. That's not as common in cities like Tampa. Paris said you'll have better luck in rural areas and national parks where there's less light pollution.