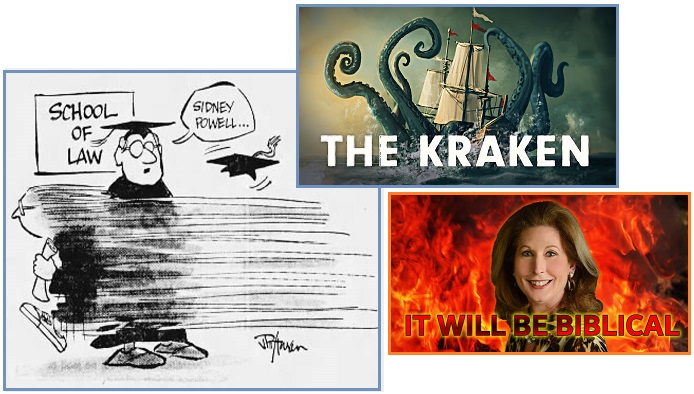 Addendum to the January 3, 3021 Newsletter to provide Sidney's summary and explain the possible VP Pence solution.

There was so much election fraud during the 2020 Presidential election it has been hard to keep track. In the swirl of lawsuits and legislative hearings and sputtering by the liberal media that there was zero evidence of fraud, who could keep track of it all? Sidney Powell did, and provided all this in a 270 page document, that not only summarizes the fraud but links to 148 source documents where the details lie. You can download this document, and read at your leisure.

Fraudulent ballots fed into the tabulating machines multiple times, ballots brought in from out of state in vans to be delivered at the back door, doors closed after midnight so the mischief could not be observed, dead people voting, votes for Biden exceeding the number of registered voters, no voter ID, no signature verification, and Dominion and other tabulating machines programed to lift millions of votes from President Trump and hand them to Biden. Just Sidney’s summary alone is mind boggling. 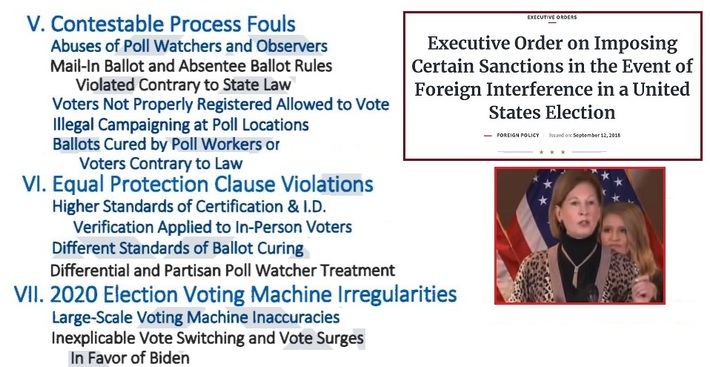 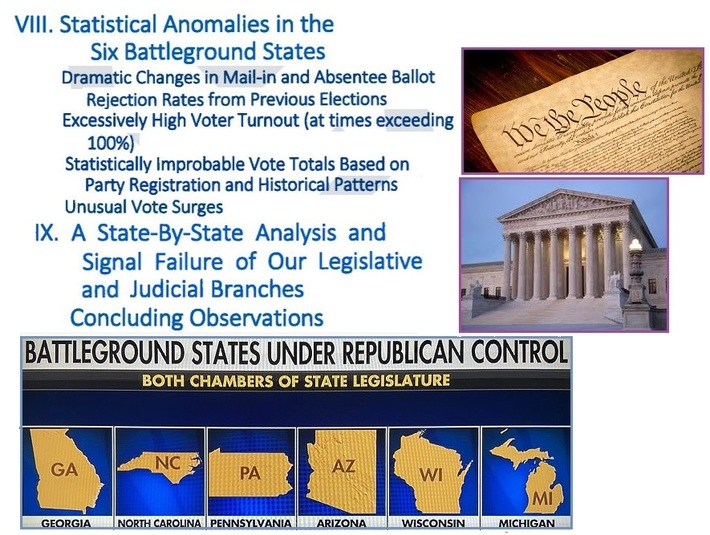 ZetaTalk Opinion 12/31/2020: Without showing the public the Kraken evidence there is no hope, and this was expected by the coup planners. What they did not expect was that the Kraken server in Germany would be commandeered, or that Haspel would become a witness, or that every single stroke of their electronic theft on election night would be recorded by the Junta. The coup planners are prepared to deny President Trump the opportunity to declassify this evidence and present it to the American people. Their hope to silence him requires the Emergency Broadcast System also be silenced. Enter the Insurrection Act, stage left.

The electronic theft was recorded by the government on their Kraken computers, but this has not yet been provided to the public. Who is better able to explain to the American people and the world how the theft happened but Sidney, who is increasingly mentioned as a potential Special Counsel to investigate and prosecute those responsible? Of all the routes to a successful conclusion, this appointment by the new Attorney General plus invoking the Insurrection Act to secure the servers and ballots and using the Emergency Broadcast System seem the most viable.

Trump Sought to Tap Sidney Powell as Special Counsel for Election Fraud
December 19, 2020
https://www.politico.com/news/2020/12/19/sidney-powell-trump-specia...
President Donald Trump escalated his bid to overturn the results of the Nov. 3 election during a contentious White House meeting telling advisers he wanted to name a special counsel to investigate his loss and pressing for the seizure of voting machines he has falsely suggested were manipulated to rig the outcome against him.

The Ten Pathways to a Trump Victory
December 22, 2020
https://www.naturalnews.com/2020-12-22-situation-update-dec-22nd-te...
These are ten feasible pathways to victory. They do not require magical thinking or miracle interventions.
3.    Appoint Sidney Powell special prosecutor, and allow her to issue subpoenas / search warrants and issue indictments against treasonous actors.
4.    Activate the Insurrection Act and deploy the military seize ballots and voting machines, then conduct a recount under military authority.
8.    Invoke the National Emergency Broadcast System, seize control over the treasonous media, broadcast all the evidence of vote fraud.

ZetaTalk Opinion 12/31/2020: We have stated that resolving the 2020 election mess must include educating the public about the extent and means of the fraud. On December 19 President Trump denied plans to use a Martial Law route on the election mess but there are also new rumors emerging that President Trump might assign a Special Prosecutor, especially Sidney Powell, to investigate election fraud. President Trump fears that using the Insurrection Act of 1807 as a means of gaining a valid recount and inspection of the paper ballots would be used by the Cabal to incite fear and panic in the populace, thus he seeks a different route.

The Constitution states that “The person having the greatest number of votes shall be the President”, so any Executive Order that President Trump writes that would be in compliance with the Constitution would be considered reasonable and legal. If a hand count were done by the National Guard, directed to do so by an Executive Order written for this purpose by President Trump, then who could object? This combined with a full recount of fraud used around the nation by perhaps a Special Counsel such as Sidney Powell would educate the public. More to come.

The nation holds its breath awaiting a joint session of both the House and Senate on January 6, 2021. This is a Constitutional procedure whereby VP Pence, as President of the Senate, records and confirms the Electors sent forth by the states. The legislatures of the Swing States have sent forth dual Elector slates, one that would vote for Biden and another that would vote for President Trump. This is all covered by the Constitution and various statues such as 3 USC 15 but give Pence a real opportunity to resolve the election fraud mess. 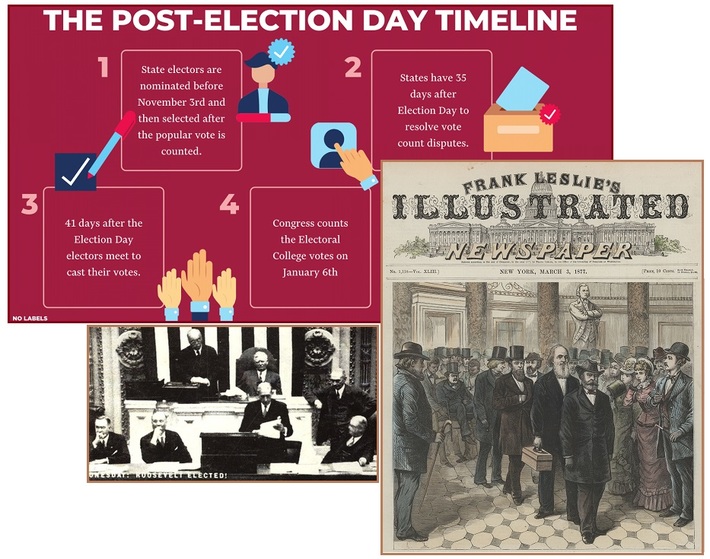 It's for Mike Pence to Judge whether a Presidential Election Was Held at All
December 26, 2020
https://www.americanthinker.com/articles/2020/12/its_for_mike_pence...
On January 6, a joint session of Congress will open with Vice President Pence presiding as president of the Senate.  His power will be plenary and unappealable.  As president of the Senate, every objection comes directly to him, and he can rule any objection "out of order" or "denied."  His task will be to fulfill his oath of office to protect and defend the Constitution of the United States and to ensure that the laws be faithfully executed.  The counting of votes is discussed in Article II, the 12th Amendment, and 3 USC 15.  The contested states of Arizona, Georgia, Michigan, New Mexico, Nevada, Pennsylvania, and Wisconsin have sent dueling slates of electors to D.C.

Only valid, lawful votes may be counted.   Any process that does not follow these rules is not an election.  If there are a handful of improper votes, we can suggest that there was in fact an election, perhaps tainted, but the election wasn't materially harmed.  But when the people charged with managing the election decide to ignore the law, whatever process they supervise is not the process defined by the law.  Therefore, it is not an election. The VP, as the presiding officer and final authority, has the unquestionable authority to declare that the states in question have not conducted presidential elections.  There will be wailing and gnashing of teeth, but no one has the authority to override his decision. If the votes of all seven contested states are registered as zero, President Trump will have 232 votes, and Joe Biden will have 222.

What will Pence do? This is in the hands of man and thus the Zetas will not speculate. In that VP Pence is now a Double, this is very much in the hands of the Junta who can dictate what they want the “Pence” to do. Since Biden is at present a White Hat Double too, this whole matter of how to resolve the 2020 election mess could be resolved by having the “Biden” withdraw before the January 21, 2021 inauguration event. The drama and uncertainty continue. 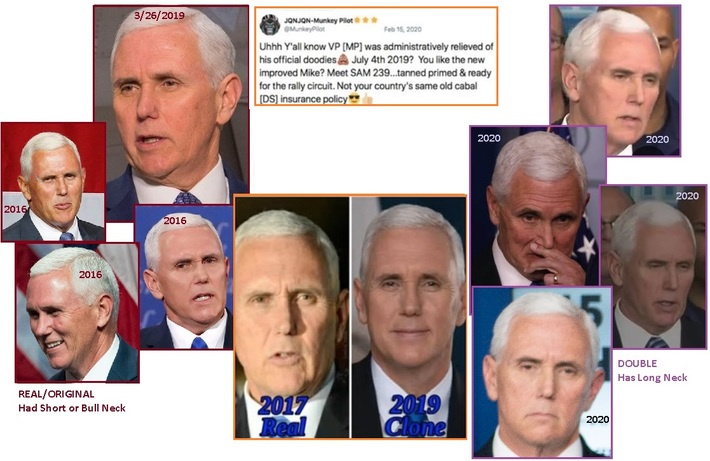 ZetaTalk Confirmation 4/30/2020: The original VP Pence was selected in 2016 and duly sworn in on January 2017. The Junta’s intel was aware that he was ambitious to replace President Trump, sharing details with his wife who then passed this information along to those plotting a coup. Thus his wife was served with a subpoena during the Bush 41 funeral in December, 2018. The following January, 2019 a coup was tried with VP Pence to be a passive (though knowledgeable) participant. His plane was called back to Washington DC at that time, as was the escape carrying Pelosi and Schiff. At this point, the original VP Pence was replaced by a Double.