ZetaTalk Newsletter Addendum as of December 31, 2021

The Zetas stated that the New Madrid Adjustment would occur over a 3 week period starting in 2021 and ending in 2022. The Zetas are not allowed to give specific dates, so just when those 3 weeks started is under debate. But on November 29 the predicted great quakes in Japan that would precede the New Madrid Adjustment occurred, followed quickly by the predicted flooding in Victoria on Vancouver Island. The Juan de Fuca Plate was then hammered until December 8. Since then the N American Continent has been peppered with quakes showing the Mainland Portion sliding down toward the SW. 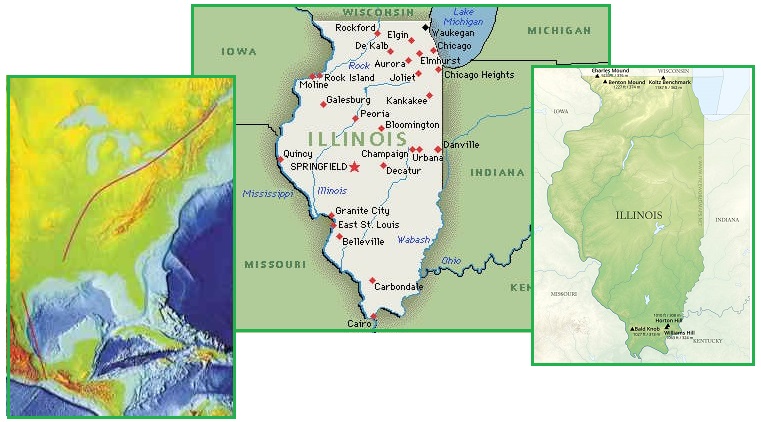 ZetaTalk Prediction 10/31/2021: We have stated that the big New Madrid event will likely happen toward the end of 2021 or shortly thereafter in 2022.

ZetaTalk Prediction 12/31/2021: We are now detailing that the New Madrid unzipping will occur over a 3 week period, starting toward the end of 2021 and overlapping into 2022. This will come up from the Gulf, travel up the Mississippi River and along the East Coast Fault Line, and finalize under the Seaway.

On December 21, 2021 breaking rock startled many in Central Illinois, near the New Madrid Chicago bend where the New Madrid Fault Line turns from heading north up along the Mississippi River to going eastward under the Seaway. Despite earthquakes in Central Illinois recorded at that time by Volcano Discovery, the USGS denied any quakes. Instead, the Junta sent up an F-15 fighter jet to create a sonic boom. The public was not convinced. The GodlikeProduction forum recorded lots of skepticism. Why the cover-up? The Zetas explain.

I'm in an office building 4 stories high and it shook our entire building, everyone I know in the state heard it. … Heard a massive boom followed by three or four fainter ones and a distant rumbling that has since stopped. I'm located in the Decatur area. … My God it must have been louder than hell. WHAT would cause an explosion so damn loud it would have been heard around most of the state as large as Illinois??? … If you hear "distant rumbling" then sonic boom is not a valid explanation anymore. … In this one you can hear the initial crack followed by the release. Not a sonic boom, not a meteor. That sounds like a low explosive to me. … I just listened to it. It doesn't sound like any sonic boom I ever heard out in west Texas. The jet jockeys used to have fun scaring cattle and breaking windows. … But does a sonic boom from a jet fighter produce a 3,4 magnitude on the Richter scale setting of the earth quake sensors? 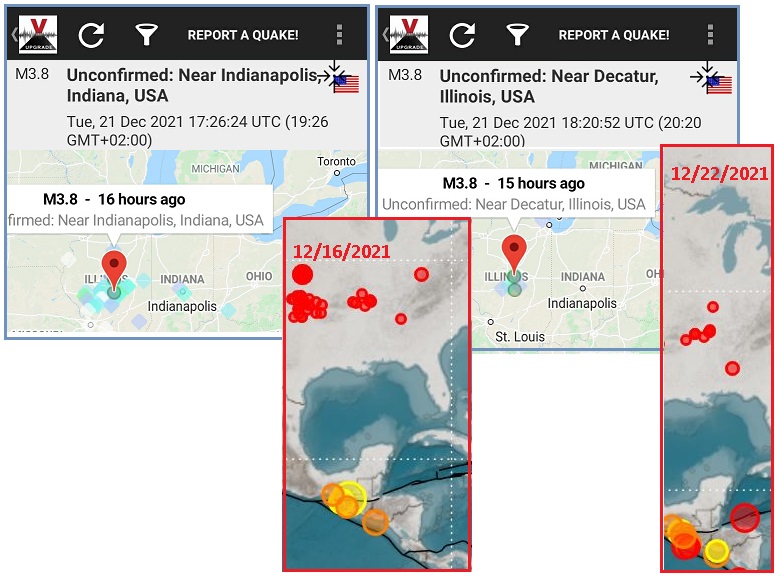 Mysterious Explosion Rocks Central Illinois
December 21, 2021
https://insiderpaper.com/mysterious-explosion-rocks-central-illinois/
The Illinois Emergency Management Agency now reports that an F-15 fighter jet in the airspace above central Illinois broke the sound barrier, creating a sonic boom. According to Nick Stewart of CBS2, the jet reached 1,140 miles per hour at an altitude of 14,700 feet. The boom occurred at around 11:20 a.m. local time, and federal, state, and local government agencies worked together to determine the cause of the sound.

ZetaTalk Insight 12/31/2021: The booms and shaking and reported earthquakes that occurred in Central Illinois on December 21 were not from a sonic boom, though F-15 jets were quickly mustered to create an excuse. Do sonic booms register as earthquakes?  The US Military is not ready to declare a New Madrid Fault Line rupture, fearing panic in the public, though they are poised to do this. The New Madrid Fault Line runs right through this region of snapping rock, a region we would call the Chicago Bend.

Many quakes have been recorded along and within the Seaway recently, as well as along the East Coast and especially in the New Madrid region. Notable are the many strong quakes at the tip of Mexico, which is the point where the Mainland Portion of the N America Continent separates from the SE Portion. This will tear open from the tip of Mexico through the Gulf and thence up along the Mississippi River. This rupture at the Chicago Bend shows that the Fault Line is ready to unzip.

A Baytown Exxon Refinery explosion on December 23, just after the Chicago Bend experienced breaking rock on December 21, shows that the New Madrid unzipping was about to begin. Baytown is on the Gulf near New Orleans where the New Madrid Adjustment started on October 12, 2019 with the collapse of the Hard Rock Hotel, and Houston is on the border between the Mainland Portion of N America that will slide to the SW and the SE Portion of N American. 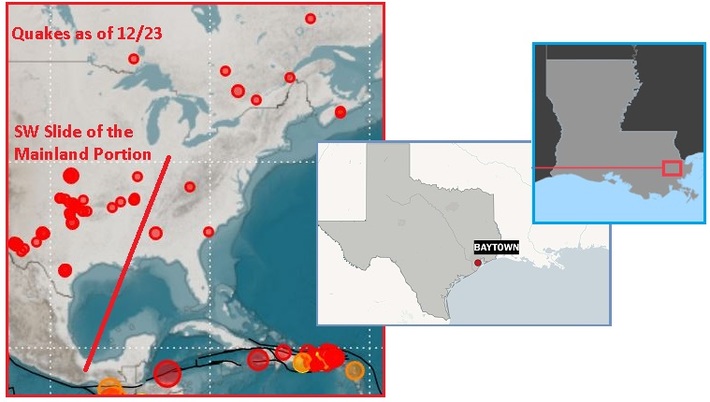 ZetaTalk Warning 2/10/2006: The notable area of catastrophe during this is the eastern half of the continental US. From Houston to Chicago to New England, the diagonal pull will tear the underpinning of cities and create a catastrophe for the US that will make the New Orleans disaster appear trivial.

If mustering an F-15 to simulate a sonic boom was an effort to suppress panic over the possibility of a New Madrid rupture, then silencing buoy warnings was another. A key buoy mid-Gulf and just north of the Yucatan Penninsula had been on alert throughout December but this was hidden from the public. Compare this to the alerts given during the Colonial Pipeline closure in May or the Pemex gas field explosion in July. By late December the alerts were obvious. 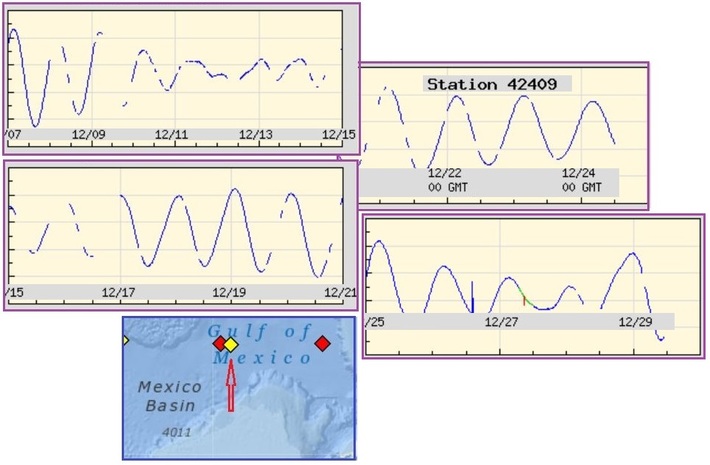 Then on December 24 an underground parking garage in Lakewood, Ohio inexplicably collapsed. Lakewood is a suburb of Cleveland, Ohio. It is directly on the Seaway which has been experiencing many quakes as the Seaway spreads during the New Madrid Adjustment in process in N America. By December 29 the N American Plate was riddled with quakes as the Mainland Portion was tugged down to the SW toward the tip of Mexico. Considering that the USGS was currently downgrading the magnitude of quakes by 4 magnitudes, these were significant.

Residents of Apartments where Parking Garage Collapsed wait to find out if they can Go Home
December 24, 2021
https://fox8.com/news/residents-of-apartments-where-parking-garage-...
A full evaluation of the site is being performed by a structural engineer.

Then on December 29 a great quake at the Chicago Bend showed that rock was indeed fracturing at a deep level. This 6.1 magnitude quake was recorded and reported by both Volcano Discovery and Raspberry Shake, but as expected during the coverup over the pending New Madrid Adjustment it was ignored by the USGS. 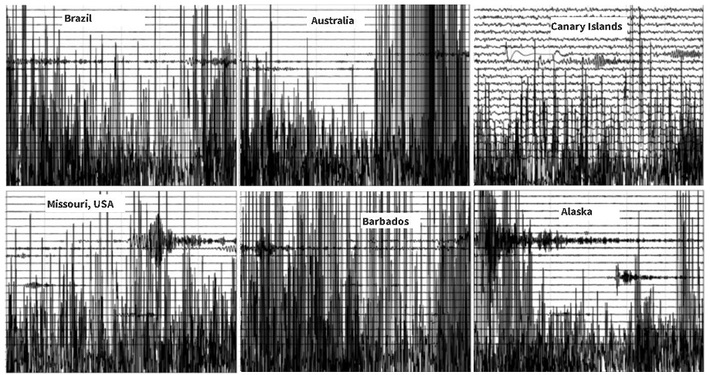 Deep quakes are usually not sensed on the surface. It is the shallow quakes that are felt. Nevertheless, global seizmographs turned black during this earthshaking quake on December 29. It appears that the 3 week period predicted by the Zetas for the New Madrid Adjustment had indeed started by December 29.

Thanks, and to all Happy new year, maybe?

What is the nexus of massive quakes in New Zealand and the pounding that Greece has been getting, plus a recent quake in the Indian Ocean? As we have repeatedly emphasized, the Indo-Australian Plate is the brake which holds back all other plate activity worldwide. When this lifts near New Zealand, the other scripted dramas are all allowed to take a step. The 7 of 10 Plate Movements have yet to complete at the African Roll and the New Madrid adjustment, which are likely to progress simultaneously.

The African Roll was in line to be #6 of the Plate Movements the Zetas predicted would occur.
Last December, 2020 the Zetas stated that the African Roll was 38% completed, and the New Madrid 36% completed. Though the New Madrid adjustment is in line to be #9 of the Plate Movements, both these steps are now proceeding simultaneously. Because the Council of Worlds delayed the New Madrid adjustment, to give the Junta and President Trump time to counter 2020 election issues, both steps #6 and #9 were delayed. Now they are both rapidly proceeding.

Nancy, I am extremely relieved by the news of "Three More Weeks" delivered by you and the Zetas, as I now can sit back and relax regarding the African adjustment, which was due to finalize AFTER the New Madrid, in the 7 of 10 sequence. I was considering a trip back up to visit Cappadocia again, seems to be a better spot on the map than sea level near Antioch.

Carlos Villa, The NON-Reporting of Quakes is a worldwide phenomenon, while I watch the Turkish quakes feverishly on the Mediterranean due to the African Adjustments, I see many NON-reported events on USGS, and Vice-Versa with Turkish Kandili reporting. Localized reports come out in the news...Sometimes. Comment by Carlos Villa on December 30, 2021 at 6:25pm
Earthquake not reported
https://montreal.ctvnews.ca/mobile/area-of-northwestern-quebec-rumb...
This Earthquake took place two days ago yet my Earthquake app shows nothing for that 4.1 magnitude on that day or any other day