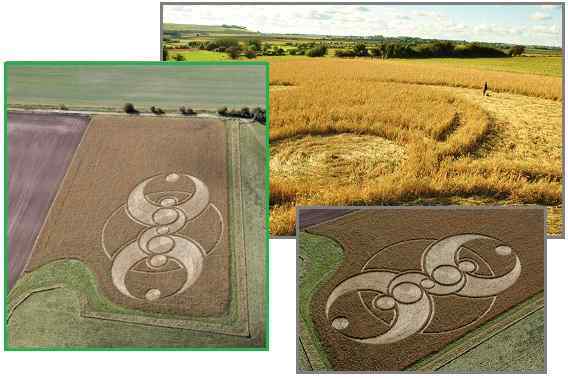 New Crop Circle, Windmill Hill, England. Reported 14th October. http://www.cropcircleconnector.com/2012/windmillhill3/windmillhill2...It reminds me "A Twirling Wobble" but with some additions. (The Earth will adjust, especially because Planet X will be between the Earth and the Sun, and all of a sudden the N Pole of Earth will swing in many different directions as it adjusts itself to this sudden change. We mentioned, in the Whiplash ZetaTalk, that ricochet effects and twirling are possible. Twirling? It will be useful to hear any comments from Zetas about this formation. The change in a character of the Earth wobble or what else?

The serpentine dance between Planet X and the Earth, caused by the clash of their magnetic fields and direction of rotation and orbit, has tightened. Planet X has a retrograde orbit and rotation, while the Earth has the opposite. Their magnetic fields clash. The Earth attempts to accommodate this magnetic clash with her daily Figure 8 wobble, but as Planet X comes closer, is losing the battle. Earth wants to align with the Sun, the dominant magnetic influence in the solar system, but is virtually assaulted by Planet X. Eventually, Planet X supplants the Sun’s influence and it is then that the Pole Shift occurs.