For my understanding I made a chart from "ZetaTalk: Pole Shift (o54) and Aftertime (o55)" shown below.

A common reaction among humans when first contemplating the pole shift as presented by us, is to think that the better option is to go out with the tidal waves, go down under quake debris, or be blown against a wall by high winds and have it all over with quickly. Most survivors of multiple pronged disasters sit stunned until death overtakes them. Imagine the World Trade Center disaster, without rescue. No food stuffs brought in, no financial rescue, no media attention. This is in essence a depression, where less and less is done, as time passes. Illness sets in, and those stunned and unable to see a way out are at last given their way out, quietly.

We present a scenario of struggle to survive in the first place, with travel and terror and living a dual life of uncertainty due to the establishment cover-up. Getting past that as a short term problem, the larger problem looms like a dark cloud. Life in the Aftertime is fraught with dying forests, lack of livestock or flocks or wildlife to eat, and gardens that will not flourish. Add to this the description of a Mad Max world, where a set of laws and a governing body will be nonexistent or turned toward self-service, marauding gangs and the need to live forever in a low-profile mode to survive. Then the time frame of a 25 years volcanic gloom, with climate change requiring vegetation to adjust as well as try to re-grow, and it seems a long way off before one can sit on the porch in the evening, enjoying the evening. Those with children despair that they will be educated, will live to adulthood without health problems besetting them, rotting teeth, painful disease, only to find they are bearing offspring into a world that is a nightmare. Those in poor health envision that they will become a burden on others, fear this will occur in slow steps so they will be unaware of it, perhaps senile or comatose due to starvation, and unable to control their life at all.

Thus, there are huge worries to anyone taking the message semi-seriously, and the first though is that this is a nightmare to be avoided. So, given this perspective, what IS there to live for? 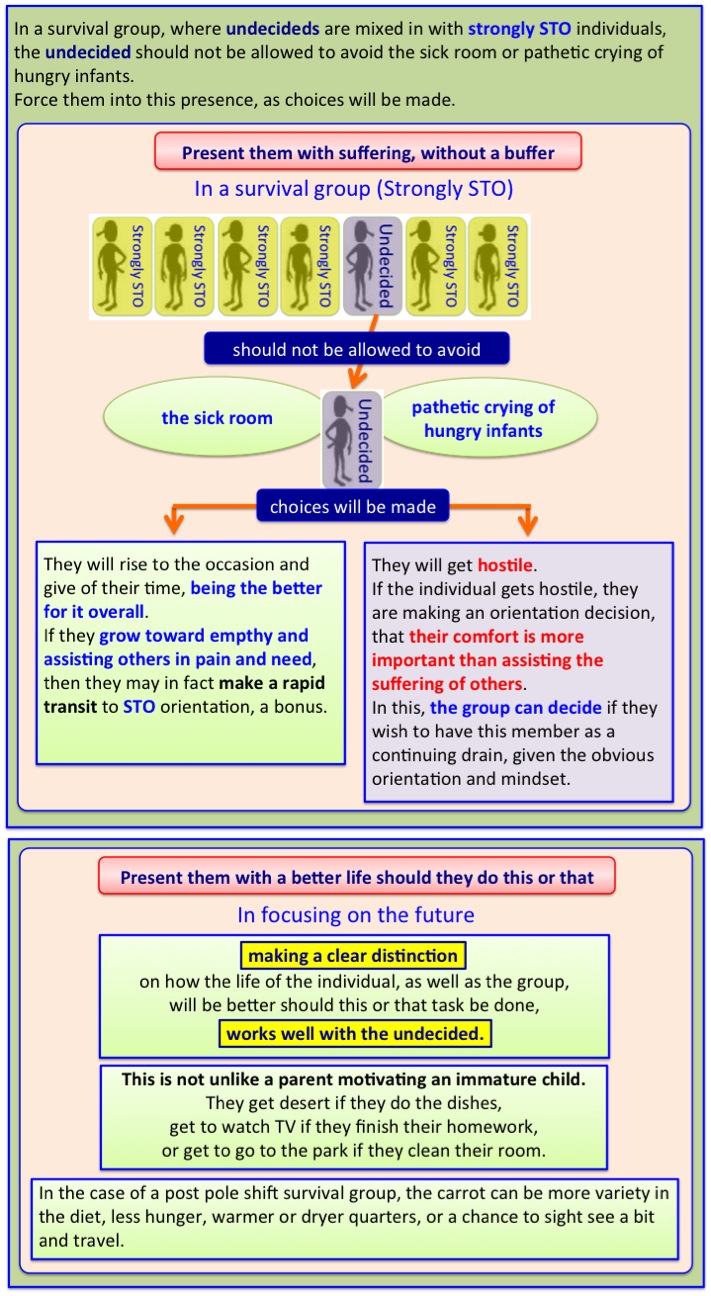 The undecided have motive in life according to immediate pleasures, in the main. When they see suffering, before them, they feel compassion and may be motivated to give of their own good, or assist, giving of their time, but this motivation vaporizes as soon as the painful situation is out of sight. They quickly react to a threat of having their lifestyle diminished, or expectations of them increased such that life becomes more work and less play. Thus, to motivate a spiritually undecided individual is, in the main, to present them with suffering, without a buffer, or to present them with a better life should they do this or that.

* ZetaTalk for Souls learn empathy by being incarnated

It is written in the Zetatalk website: "Love may have a blooming going into the shift, as it ought, those with great love in their hearts responding to the realization that little else matters, ZetaTalk." and "The soul does not require food or nourishment as physical life forms do. The only outside reach required is to acquire more of the stuff of souls, present everywhere in the Universe, when growth in bulk is occurring." My Q. is: Has Love something to do with the stuff of souls, is it the best nourishment that makes it grow? Can intense love one gives another human being help his soul to spark or grow faster?

Souls learn empathy by being incarnated, as when they have a life of pain, they recognize this pain in others in later lives and sympathize. Being Service-to-Others obviously involves being empathetic, regardless of what form emotion took during their incarnated years. Mammals are emotional, where reptiles are not, but souls that have evolved in reptilian bodies are just as Service-to-Others as those evolving in mammalian bodies. Shedding love toward others does induce that soul to consider loving others. This is a decision of the soul, a growth of the soul, taking action to help others. A Service-to-Self soul, for instance, would only take advantage of love being thrown their way, and this would hardly help them realize the error of their ways.

Hi Kojima... thank you very much for these ZT refreshers, I read them again with enthusiasm because I think the spiritual part of ZT is extremely important as well, and sometimes something is neglected. Thanks for this!

* ZetaTalk for Karma, simply a result of your actions

Please explain how karma, grace and orientation work together. For example if you kill someone your karma would be to be killed in this life or another, but if before that happens you risk your life to save people from a burning house, the law of grace means you have balanced your karma. But if you were STS you are still STS, right? So your orientation has not changed. Any comments would be helpful.

We have explained that karma as believed by many does not exist. The only karma that occurs during one's lifetime is as a result of your actions during your lifetime. For instance, if you are a bully and beat up others, you may find yourself facing a group of your former victims at some point, determined to beat you senseless. This is not karma as arranged by the Spirit Guides or the Universe but simply a result of your actions. It is just as likely that your victims will never get organized enough to pull it off.

Having said that, we must mention that the Spirit Guides will arrange an incarnation in your future such that you, the bully, understands fully what you have visited upon others. This might take many forms. For instance, if the soul in question is gaining empathy for others, you might be a doctor having to treat the victims of a bully. If not gaining in empathy, you might be forced to live in fear in a future life, to force this lesson upon you.

* ZetaTalk for Example of karma

I asked a question last week, concerning Karma. You say, Karma is done in a lifetime, with a 'fresh start' in a new incarnation. A fresh start? even for those who have quite deliberately hurt, maimed, crippled, destroyed or killed? I just want some clarification on how, if any, Justice is done within a single lifespan. I suppose this takes me back to the question of birthing guides/karma. I just need more understanding on how it works!

Yes, a fresh start for each new incarnation. Within a lifetime, karma may apply if the entity lives their life in such a way as to bring this upon themselves. An example might be a cruel sadist, who assumes they have more strength than those around them and assumes they are more clever than those around them. They are operating where they can take advantage of those weaker than them. Then one day they are no longer the top dog, as others who are stronger and more clever arrive on the scene. The bully is himself bullied. He turns to others around him, for help, and gets none. This is an example of karma, due to one's life, during one's life.

How can one tell if a human has a soul or not. Can telepathy tell? I find a lot of people are just simply 'empty-headed' and oblivious to any suffering they cause. Can a person make bad karma for themselves by taking physical revenge on a person who has hurt them emotionally or threatened them physically? I would 'never' actually do this to anyone, but the 'urge' is there, to teach them a lesson, esp: in bad dreams and flashbacks. How does one move on from these damaging and hurtful urges?

Karma is something a person creates during a lifetime for themselves, not something visited upon them in future lifetimes. Each lifetime is a fresh start. The Birthing Guides may impose an incarnation that is not as pleasant as the soul hoped for, but this is dependent upon many factors, not as a punishment. The desire for revenge is present in many animals, and man is an animal. One should not assume they are Service-to-Self simply because they get angry at mistreatment.

Why there is some people that don't believe in life after death? Can the zetas talk about that?

Incarnations are not an easy concept for man to grasp. They imagine that if the soul leaves the body, it will collapse in a heap until the soul returns. Is this what happens to dogs and cats, which do not have souls? If the human is incarnated by an old soul, the human notices that they are intuitive about many things, as those with wisdom or knowledge they could not have gained, and hearing the stories about the soul in the body, believe it! If incarnated by a very young soul, or one just forming during this incarnation, they have no such clues, and it all seems like just a story. Then there are others, who deep down know that the soul exists, who are fearful of what the future brings, so are in denial for comfort.