So close to the ZetaTalk description of the passage of Planet X (through the inner solar system), the nature of this traveling rogue planet (odd orbit started early in its life), where it will come in the solar system (as close as Venus orbit), the effect it might have on Earth's orbit (being drawn in toward the Sun, though ZetaTalk states this is temporary), and catastrophic effects on Earth, including of course the weather.

For those of you who can get this channel, will be worth watching this series as it sure is an indication that the truth is going to be OUTTED. I note they don't have lying NASA on as a spokesperson. Just scientists, who have been repressed and threatened. 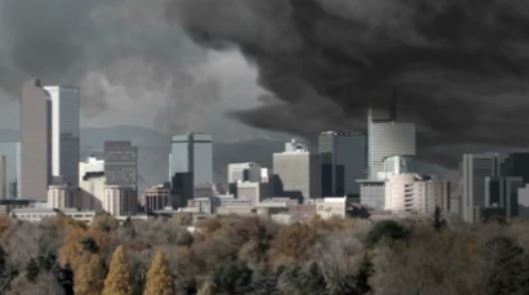 SOZT
The Weather  channels series is in remarkable coordination with Obama’s planned announcement on the presence of Planet X, aka Nibiru, in the inner solar system. The descriptions of a wandering, rogue planet are close to what ZetaTalk has detailed from the start of the ZetaTalk saga, though wandering planets
http://www.zetatalk.com/theword/tworx463.htm
were denied by NASA at the time. Zetas right again! The Weather Channel correctly infers that all the planets
http://www.zetatalk.com/science/s101.htm
in the solar system can be expected to be perturbed, as ZetaTalk has stated from the start. They have been perturbed for eons, leaning into the direction of the Constellation Orion,
http://www.zetatalk.com/science/s106.htm
due to the presence of the Sun’s dark unlit binary sun and the presence of Planet X which rides between these two foci.

The path, which is depicted as a potential by the Weather channel, swings within Jupiter’s orbit, and is described as potentially perturbing the Earth to be as close to the Sun as Venus. Is this not detailed within ZetaTalk
http://www.zetatalk.com/ning/15de2012.htm
for the Last Weeks, when the Earth will be pulled closer to Planet X in that direction by some 30 million miles?
http://youtu.be/rEQnM02oF_w
Here the Weather Channel digresses from ZetaTalk as their hypothesis is based on the rogue planet not coming closer than Jupiter, where it is currently riding within the orbit of Venus, close to the Sun. The establishment, in approving and even encouraging this Weather Channel series, did not want to address the concept of a crustal shift before Obama’s announcement. They chose to address only half the horror.

The Weather Channel, of course, can also be expected to emphasize climate disruption, which they ascribe to a perturbed orbit of Earth due to the presence of Planet X. ZetaTalk has explained orbit not as something static where planets can be pushed about and then will STAY where pushed, but as dynamic, affected by many factors. The planets are perturbed all the time, but RETURN to their orbits!
http://www.zetatalk.com/science/s111.htm
It is in fact not a perturbed orbit of Earth that is causing weather extremes lately, it is the Earth wobble, which the Weather Channel did not address as this would lead to Planet X as a rogue planet being nearby. The Weather Channel chose not to address the very palpable Earth wobble, thus.

Using the disturbed orbit of Earth as an excuse, the Weather Channel then describes rising seas and tidal waves, both correct predictions and likewise predicted by ZetaTalk from the start for the hour of the Pole Shift, during the increasingly severe Earth wobble, and within two year after the Pole Shift. ZetaTalk has predicted tidal waves 200-300 feet high during severe wobbles and a rise in sea level to 675 feet, worldwide, after the Pole Shift. The Weather Channel chose to stick to the 200 foot rise mankind has predicted if and when the poles and Greenland ice all melt. The point is made – coastal cities will be uninhabitable.

Why doesn’t the Weather Channel credit ZetaTalk for presenting all these concepts over a decade ago? To do so would be to espouse and embrace the alien presence, and at present there is a cover-up over this issue. To do so would likewise come close to breaking the cover-up over the presence of Planet X, by espousing the single source that has been correct on this issue since 1995 – ZetaTalk. What is the relationship, timewise, of this Weather Channel special and Obama’s pending announcement? The series was planned in late January, 2013, after Obama had been sworn in for his second term, and it was clear the cover-up crowd was losing the battle. Since the series is generic, covering many possibilities, it was deemed that it could be aired before or after Obama’s admissions on the cover-up.
EOZT

That's Bodes Law, that model, which states that the way the planets are sling around the Sun indicates yet ANOTHER body should be there.

mmm just when this came out too,looks like more truth coming out about  Planet X and ET's

If you've ever looked up into the sky and wondered whether someone might be looking back, some scientists say you can stop wondering — because they're certain that alien lifeforms exist. This provocative position is explored on "Are We Alone?", a month-long series airing on the Science Channel. Theoretical physicist Michio Kaku says aliens are a sure thing: "How many stars are there out in the universe?" he asks, calculating the answer as "10 sextillion — that's one with 22 zeroes after it." More stars equal more planets equal more possibilities for extra-terrestrial life. "There definitely are aliens in outer space — they're out there." [Huffington Post]