The foundations of more than 10 houses were damaged, and they are now in danger of collapsing.

The Tan Long People's Committee also arranged forces to monitor the erosion site around the clock.

Le Phuoc Dai, head of the province's Sub-Department of Irrigation, said local residents had built houses too close to the river, narrowing the river and causing water to flow more rapidly. This resulted in even more erosion, he said.

Since early this month, erosion about 100 metres long and 25 metres deep inland has threatened the lives of hundreds of households.

The Dong Thap People's Committee also told the Department of Agriculture and Rural Development and several agencies to relocate households in the eroded area.

Boats and other waterway transport facilities have been banned from docking at the eroded area, said the People's Committee.

Dong Thap has 34 communes, wards and towns that have had riverbank erosion with a total length of 38.7 km, affecting 4,000 households. In many areas, erosion was 10- 40 metres deep inland.

The Dong Thap Province People's Committee has asked the Government to support financing for the province to build an additional nine residential areas and clusters to relocate households living in erosion-prone areas.

An Giang Province has about 6,000 households living in these areas, and its People's Committee has asked the Government for help to build an additional 19 residential areas and clusters to relocate them.

To prevent further erosion, the An Giang People's Committee has decided to also relocate 244 floating cages that breed fish and other aquatic species in the Hau River in Long Xuyen City's My Hoa Hung Commune.

Under the decision, owners of the floating cages have to move their cages to new places to the east of My Hoa Hung Islet by the end of this year.

In the coastal province of Ca Mau, local authorities have reported that about 80 per cent of the land on the eastern and western coast of Ca Mau had suffered erosion.

Erosion has also occurred along most rivers and canals, affecting agricultural production and thousands of households, they said.

Measures for erosion are all at sea Advancing waves and the subsequent erosion have already claimed buildings and property along the coast from Uchil to Ullal. But the “permanent solution”, costing Rs. 911 crore, will only come into effect from next year, according to U.T. Khader, Minister of Health and Family Welfare.

Coastal properties in places like Ullal, Kotepura, Kodi, Mogaveerpatna, Oiliyarinagar were in danger of being washed away this year.

The Minister assured the people that the port would grant temporary relief such as dumping boulders and sand bags. This will be until the Rs. 236 crore Asian Development Bank’s sea wall project takes off. “The ADB project is a permanent solution, but that will take three years. But as the berms and reefs are being constructed, the effects of sea erosion will be abated.

Until then, the port department will ensure boulders are constantly replaced along the coast,” Mr. Khader, who is also the local MLA, said. He added that the work was expected to start from October.

Speaking on the administration’s readiness, for what has become an annual experience during the monsoons, he said: “There are weak spots along the coast, but you can’t tell when it will hit where. Some had objected to construction of a concrete wall or dumping of stones in front of their properties, and these properties are being damaged this year.”

With the frothy churning of the ocean and strong waves beating down on the coast, Chetan S. Kalvi, Chief Officer, Ullal Town Municipal Corporation, said the erosion this time was “worse” than last time.

“A lit of beach has been lost. Usually, the erosion starts later, but this time, it has started when the monsoons are yet to intensify,” he said.

At Summer Sands, a resort at Ullal, an open-air auditorium balances precariously on the edge of a precipice created by the swirling waves. Mr. Khader assured him boulders will be unloaded as soon as the tides recede.

A little distance away at Uchil, Chandrashekhar U., a fisherman, says within the matter of days, nearly 50m of beach has disappeared.

The stones dumped in front of his house were “too small” and were being washed away, he told Mr. Khader. So far a store room for his nets and ice boxes have been damaged. 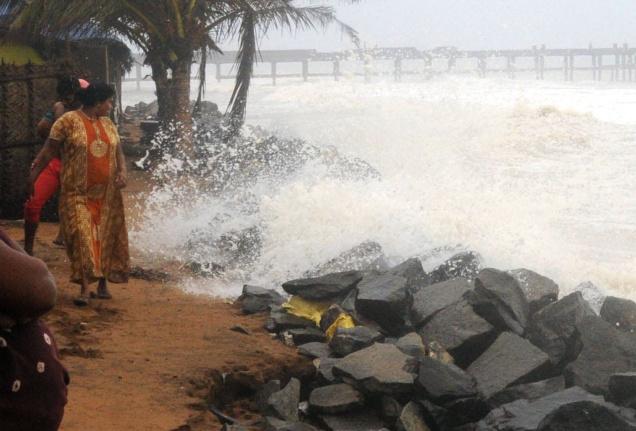 Tidal waves that began battering the coastal areas of Valiathura and Cheriyathura earlier this week have prompted the authorities to open two relief camps on Wednesday.

As on Wednesday, 106 families, whose houses were inundated on Tuesday, had been shifted to the two camps set up at the Valiathura Government Fisheries School and the Government UP School there, B. Sashikumar, tahsildar, Thiruvananthapuram, said.

Four houses in the Thiruvallam village were also inundated, but the families had shifted to the houses of relatives.

District Collector Biju Prabhakar, who discussed the situation with officials on Wednesday, said all arrangements, including for food, were made and that the district administration was monitoring the situation.

The Collector would visit the affected areas on Thursday. Health Minister V.S. Sivakumar visited some of the areas on Wednesday.

Valiathura councillor Tony Oliver, meanwhile, said the situation could have been avoided had the several projects, including those for rehabilitation of people in the area, were not delayed. 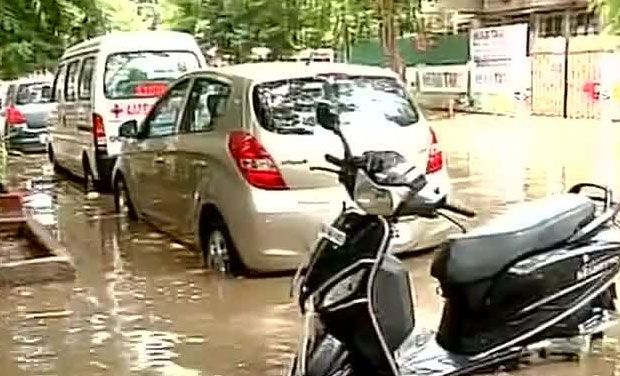 Mumbai: Mumbai is infamous for coming to a standstill during monsoons. Mumbaikars experienced relief from rising mercury as the city received a short spell of rain on Wednesday.

However, high tide caused flooding in parts of Dadar on Thursday. Sea-water also submerged road partially near Gateway of India due to high tide in Mumbai.

Meanwhile, the four-month-long monsoon season started on a weak note as the annual rains arrived over country’s southern coast about five days behind the average date of 1 June.