He expressed concerns about the flood situation in Prachin Buri as the Pasak Chonlasit Dam is now nearly full and needed to discharge some volume of water before the new tropical depression arrived.

"We have to discharge about 8.9 million cubic metres per day from the dam to prepare for the upcoming depression," he said.

Suthep explained that the department would drain the excess amount of water into the fields on the western and eastern banks of Chao Phraya River.

However, he explained that most of the flood-affected areas were located along the river and waterway and that is why they were at risk from the adverse impact of the flooding.

Floods have already affected more than 2.1 million people this month and ravaged more than 1.14 million rai of farmland.

Disaster Prevention and Mitigation Department director-general Chatchai Phromlert said yesterday that floodwater had also damaged 2,310 roads, 6,900 houses and 145 bridges. "Of the 29 flood-hit provinces, the situation in just five has returned to normal as of today," he said.

Many of these provinces are heavily flooded. The worst-hit spots in Chaiyaphum are about 2.8 metres under water.

In Buri Ram, floodwater levels have soared above three metres in Krasang district, marooning more than 200 families. Officials are making desperate efforts to get relief items to these victims.

Working alongside local administrative bodies, the department has mobilised thousands of volunteers to deliver assistance. More than 1,500 boats have been dispatched to reach the victims. Not all, however, are happy with the authorities' response.

Anong Thongsri, a 46-year-old resident in Prachin Buri's flooded Kabin Buri district, lamented that assistance efforts had failed to reach all those affected. "The floodwater level is also rising," she said.

Keo Vy, chief of the Cabinet of the National Committee for Disaster Management (NCDM), said nearly 5,000 families have been evacuated to higher grounds, while over 20,000 houses have been inundated.

Prime Minister Hun Sen on Wednesday called on local authorities to be on high alert over the annual Mekong River floods and advised them to be ready to help affected people.

He also urged parents to take care of their children in order to prevent drowning.

Floods usually hit Cambodia between August and October. In 2011, the country was hit the worst from floods, killing up to 250 people, according to the NCDM.
Source

“Thought the tipping of the Philippine Plate at first gives the islands of the Philippines some relief, as the subduction of the plate is pushing under them, as the bending of the tongue holding Indonesia progresses, they too find an astonishing loss of sea level. However, other than some small islands and the direct coastline, little of the Philippines will be affected by this rise in sea level, and safety can be gained if the coastal residents head for the hills at the first sign of sinking. Tsunami will affect the Philippines, to a potential height of 40 feet, so a prompt evacuation to be at least 20 miles inland is necessary. If the coast of southern China will lose 20 feet in elevation, the Philippines will ultimately lose twice that much, to a total loss of 40 feet in elevation. Due to the tilting of the Indo-Australia Plate, Bangladesh gains temporary relief from the steady sinking it has experienced the past few years. And the tsunami likely to race northward will not come their way because the waters from the Bay of Bengal will be rushing into the South China Sea, and there clashing to push north. If the loss of 40 feet in elevation is not devastating to the Philippines, it is to the coastline of southern Burma, Tailand, and Cambodia, which have vast areas that will suddenly and permanently be flooded.” 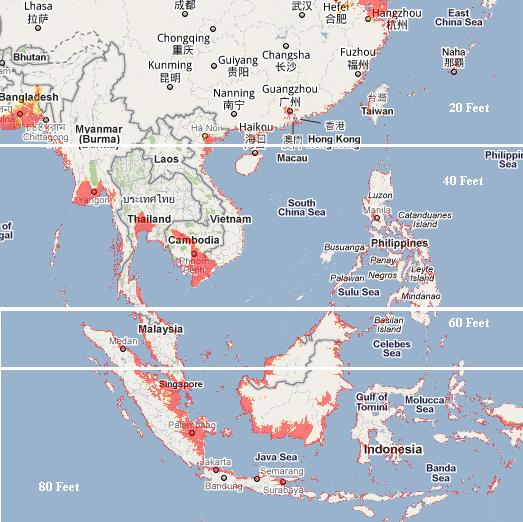 Where the 7 of 10 sinking will flood the tip of Vietnam south of Ho Chi Minh City, and a strip of land just to the north of Phnom Penh in Cambodia, and the area around Bangkok in Thailand, the loss of sea level elevation after the pole shift is much more severe. Phnom Penh will be reduced to a small island, the highlands of Vietnam and Laos to a narrow peninsula, and Thailand north of the peninsula reduced to half its land mass. Since most of the inhabitants in these countries live in structures that do well in earthquakes, made of flexible materials not stacked high, there will be many survivors seeking to move inland, to the north, after the pole shift. A key advantage for these survivors is their current lifestyle, where farming and fishing are prevalent. Moving to boats, to form floating cities relying heavily on what the sea provides, will be a natural trend among survivors.