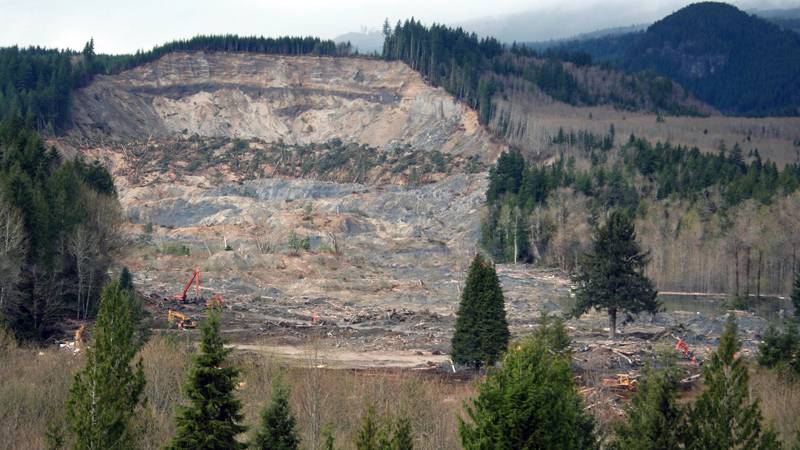 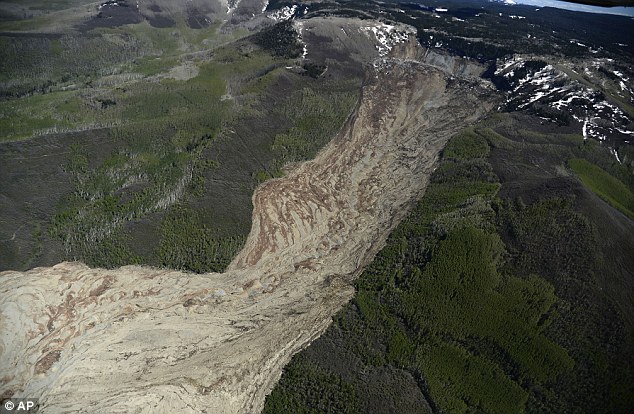 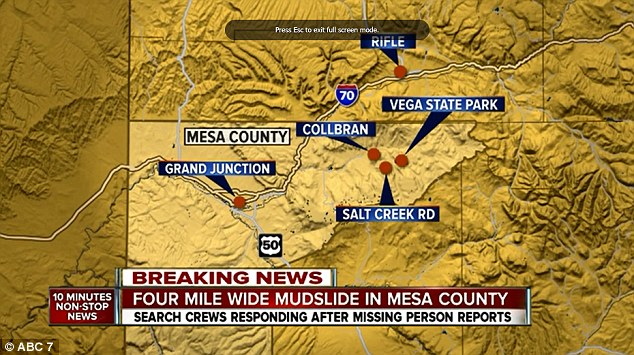 Rescue teams are searching for three people reported missing after a large mudslide struck Sunday evening in western Colorado’s Mesa County that is estimated at 2 miles wide, 4 miles long and 250 feet deep. The slide hit in a remote area near the town of Collbran, about 40 miles east of Grand Junction on May 25, 2014.

Rescuers raced to the scene when it was reported around 6 p.m MDT, but eased operations after nightfall, Mesa County Sheriff’s spokeswoman Lisa McCammon said.

There’s 'not a lot of activity tonight,' she said. The 'slide area is very unstable.' She said a daylight search was safer.

The department estimated the slide is about 4 miles long, 2 miles wide and about 250 feet deep in many places. An entire ridge was believed to have been sliding for most of the day

The sheriff’s office said that the person who reported the slide at about 6:15 p.m. 'described hearing a noise that sounded much like a freight train.'

"The slide came down with so much force and velocity that it came to a hill and went up and over a hill and then came back down -- a significant hill. So the power behind it was remarkable," the sheriff said.

The missing men, a county road worker, his son and another man went to check on damage Sunday from an initial slide near the edge of Grand Mesa, one of the world’s largest flat-topped mountains, after a rancher reported that his irrigation ditch had stopped flowing, Mesa County Sheriff Stan Hilkey said.

Hilkey said no signs of the men or their truck have been found. The three missing people have been identified as 46-year-old Wes Hawkins, 53-year-old Clancy Nichols and his son 24-year-old son, Danny.

“Everyone on this mountain is praying for a miracle right now,” he said.

The search near the small town of Collbran has been hampered because only the lower third of the slide is stable. Even at the edges, the mud is 20 to 30 feet deep. It’s believed to be several hundred feet deep in some places.

Bill Clark, a cousin of one of the missing men, visited the canyon where the slide struck and said it was completely filled with mud. He said the slide struck with so much force that some also spilled over into the neighbouring draw.

“I’ve never seen so much earth move like that in my life,” he said.

From a distance of about 10 miles, the slide looked like a funnel, narrowing into a culvert below. It cut a giant channel through trees. The creek that once gradually flowed down the ridge now spurted down like a waterfall. Roads in the area, where some cattle grazed, were muddy from rain.

“How in the devil could this happen?” said Collbran resident Lloyd Power, gazing out at the slide.

He said residents were praying for the missing. “That’s all we can do,” Power said.

A unified incident command has been established between Plateau Valley Fire Department and the Mesa sheriff, to handle the slide and search for the people possibly caught in it.

Roadblocks have been set up to keep people from the rural area. Conditions are described as “very unstable” by authorities.

Laser and radar technology is being used to remap the area of a massive mudslide in western Colorado, where three men are still missing.

Mesa County officials say two days of flights over a large area from Collbran to Vega Reservoir are underway. About 87 flights over the area will remap the topography of the slide and are aimed at getting a better sense of the new landscape.

USGS investigating cause of 'rare' earthquake

Seismologists with the United States Geological Survey are trying to determine what caused the earthquake and area scientists say they haven't seen a quake of that magnitude in at least 40 years.

The quake happened around 9:30 Saturday night. Many 9NEWS viewers called and emailed to say they felt the ground shaking.

The quake struck about six miles from Evans and 13 miles east of Windsor. Sunday's slide on the Grand Mesa caused an earthquake that registered 2.8 on the Richter scale, the U.S. Geological Survey office in Golden reported Wednesday.

In comparison to the seismic reading of an earthquake, Mesa County and CMU say the mudslides arrived very gradually. Earthquakes typically arrive with a spike on the chart, instead of the gradual increase seen with the mudslide.

The gradual arrival of the "P Wave" makes it difficult for geologists to place a precise time of origin on Sunday's slide.

Mesa County commissioners are seeking a declaration for a state of emergency in the area.

"The Declaration of Emergency is being done so that the proper resources can be gathered from the State of Colorado and the federal government," county administrator Tom Fisher said in a news release. "It will allow Mesa County, the local residents and Forest Service to properly assess the ongoing risk to life and property in the area. This Declaration is largely being done to assess risk, since we don't have the expertise or the jurisdiction to fully support the assessment."

The governor's office is working with the county on the disaster declaration, according to Roxane White, who is Gov. John Hickenlooper's chief of staff. She said the governor is also trying to get an aerial magnetometer donated to help in the search.

Clancy Nichols, 51, his son Danny, 24, and Wes Hawkins, 46, are missing and presumed dead in the mudslide.

Mesa County and CMU report the seismic monitoring stations registered that much smaller slide around 7:19 a.m., but say it barely registered.

Because of ongoing fears of another landslide, incident commanders in Mesa County said they are looking to place remote cameras, GPS equipment and seismometers in the area to gather better information. For now, however, experts are primarily monitoring the area visually with manned or unmanned flights and two USGS satellites.

Another smaller mudslide today, 5/27, in Colorado to the east of the Collbran slide. 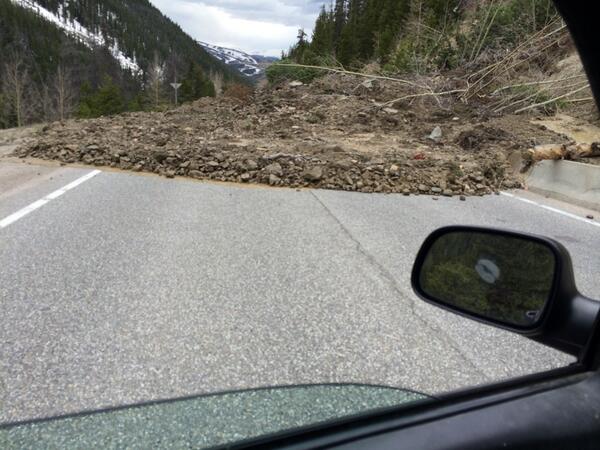 US 6 over Loveland Pass has been closed by a mudslide.

The Colorado Department of Transportation said the slide occurred Tuesday at about 4 p.m. and stretches about 75 feet wide and left about 7 feet of debris on the centerline of US 6 on the eastern side of Loveland Pass.

CDOT spokeswoman Tracy Trulove said there were no reports of injuries or damage to vehicles traveling the road about 45 miles west of Denver.

The road will remain closed until at least Wednesday so geologist can examine the stability of the slope.

Trucks carrying hazardous cargo are normally routed onto the road to avoid Eisenhower Tunnel on Interstate 70. Those trucks will be escorted through the tunnel.

The slide happened about 90 miles east of a massive mudslide Saturday that left three people missing.

Rain was not a cause.

Seismogram of the station, IW.SMCO, near there shows that it was caused by a big ground motion in the plate. 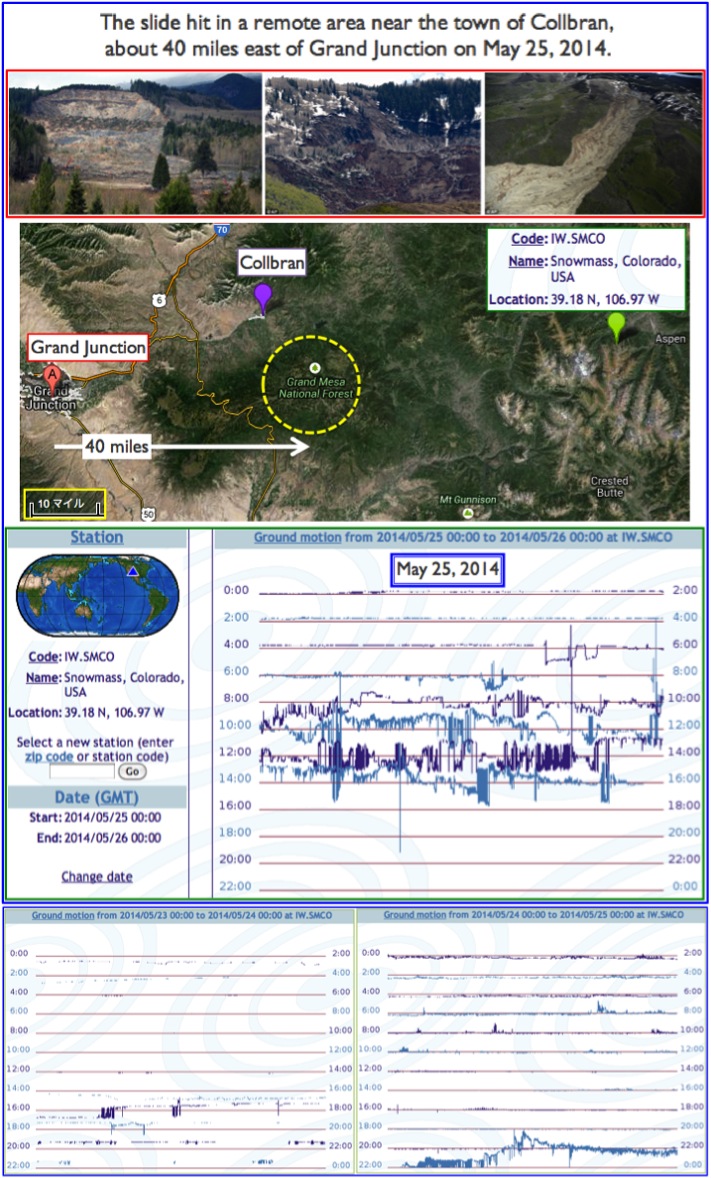