The Pacific Ring of Fire is....well, on fire!

Only a few hours apart, on the 8th Dec, major earthquakes have struck both sides of the Pacific, off the coast of California and near the Solomon Islands, triggering 22 tsunami warning buoys into event mode.

All of this on the back of another large quake in Aceh 2 days ago that killed 100 people and another in the Banda Sea the day before.

Of course, that's not the whole picture; numerous other quakes have occurred all around the Pacific coastlines of the Americas and Asia in the last week, and along other adjacent plate boundaries, up into the Himalayas and China, all culminating in these latest big adjustments.

Does this mean we are about to see some more pronounced progression of the 7 out of 10 - South America roll, Africa roll, New Madrid?  Only time will tell. The death toll from a powerful earthquake that struck off Indonesia’s Sumatra island at dawn on Wednesday has risen to 97, with more people feared trapped in collapsed buildings.

Search and rescue teams in Aceh province, an area previously devastated by a massive quake and tsunami on 26 December 2004, used tractors to shift the rubble in attempts to reach people buried in their houses.

The shallow 6.5-magnitude quake hit just north of the small town of Reuleuet, according to the US Geological Survey. There was no tsunami alert.

Maj Gen Tatang Sulaiman, the chief of the army in Aceh province, gave the updated toll on Wednesday , adding that four people had been pulled from the rubble alive. Another four or five are known to be buried, but Sulaiman did not say if they are dead or alive.

“Hopefully we would be able to finish the evacuation from the rubble before sunset,” he added.

The rescue effort is concentrated on Meureudu, a severely affected town in Pidie Jaya, the closest district to the epicentre of the undersea quake. Local authorities said there was an urgent need for more excavation equipment and emergency supplies.

“It was very bad, the tremors felt even stronger than 2004 earthquake,” said Musman Aziz, a resident from Meureudu.

'That was a big one,' San Francisco resident says A 6.5 magnitude earthquake has been reported off the coast of northern California, the United States Geological Survey has said.

The epicentre was 165km west of Ferndale, California, at a shallow depth of 10km, according to the scientific agency.

The quake – which hit around 6.50am Pacific time – was initially thought to be 6.9-magnitude, but the it was revised down to 6.5.

There was no tsunami warning, advisory or threat in effect following the earthquake, the Pacific Tsunami Warning Center of the National Weather Service said on its website.

Some social media users said they felt the tremor in San Francisco, about 418.43 km south.

"That was a big one," wrote Twitter user Antonis Papatsaras from the Bay Area city.

A 7.7 magnitude earthquake struck around 40 miles off the coast of the islands shortly after 5.30pm UK time, according to the US Geological Survey A tsunami warning has been issued after a powerful earthquake hit the Solomon Islands.

A 7.7magnitude earthquake struck around 40 miles off the coast of the islands shortly at around 4.40am (5.40pm UK time), according to the US Geological Survey.

A warning issued by the Pacific Tsunami Warning Center said tsunami waves are possible for the next three hours.

It stated: "Hazardous tsunami waves from this earthquake are possible within the next three hours along some coasts of Solomon Islands, Vanuatu, Papua New Guinea, Nauru, New Caledonia, Tuvalu and Kosrae."

Resident Tali Hong said tremors from the quake were the most powerful she had ever experienced.

She told NBC: "The earthquake was one of the biggest and longest I have ever felt.

"I was born here in Honiara and lived here most of my life.

"I'm located in central Honiara, in one of the big urban areas. Just checked with my neighbors and surrounding area; there is not visible damage. However, we have no electricity at the moment."

Minutes after the initial earthquake, a 5.5-magnitude aftershock hit the region. 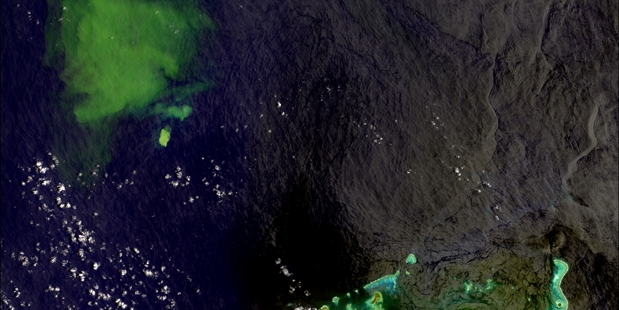 The vast plume measures 30km long and 20km wide, not far from a newly-formed island and just 33km off the coast of Tonga's main island Tongatapu (bottom right). Photo / Nasa

A Kiwi scientist has unexpectedly discovered what appears to be a huge undersea volcanic eruption near the main island of Tonga.

For the past two years, University of Auckland coastal geomorphologist Dr Murray Ford has been using satellite images to track the evolution of a kilometre-wide island of ash and large rock fragments, created by a large eruption in December 2014 and January 2015.

But when scanning images today, he observed a vast plume measuring 30km long and 20km wide, not far from the newly-formed island and just 33km off the coast of Tonga's main island Tongatapu.

The plume, appearing as a greenish cloud in the ocean, was captured by the open-source US Geological Survey/NASA Landsat 8 satellite on January 27.

"It's come out of nowhere," said Ford, who immediately contacted volcanologists at the university who had recently travelled to Tonga.

"It was pretty unusual to get an image without any cloud in it - and then I saw this big, turbid plume of volcanic debris, so I checked in with our volcanologists to see what was going on."

GNS Science volcanologist Brad Scott said scientists were now making contact with colleagues in Tonga and notifying the Volcanic Ash Advisory Centre, although the erupted material appeared to be contained to the ocean.

"We are now relatively confident that these images are representing a submarine eruption," Scott said. CONTINUE...

Published on 22 Nov 2016. There's something bubbling in the water in Kaikoura. Kaikoura Kayaks owner Matt Foy says he discovered bubbles on the surface of the water - something he's never seen before. Lots of aftershocks in the Solomon Islands!  Still continuing strong! November 24 at 2:51am
·
Nobody Knows Where This Big Raft of Pumice Came From - WIRED

23 NOVEMBER 2016. LAST WEEK, A Royal New Zealand Air Force flight spotted a new pumice raft in the middle of the Pacific ocean to the west of Tonga. Pumice rafts are floating islands of pumice created during a submarine volcanic eruption and they can persist for months or longer. This raft was seen by aircraft and satellite in an area with no known volcanoes. However, from the looks of the raft, it might be a long way from home. The pumice is strung out in long streamers, suggesting it has been smeared and distorted by ocean currents and weather as the pumice floats along the ocean surface. 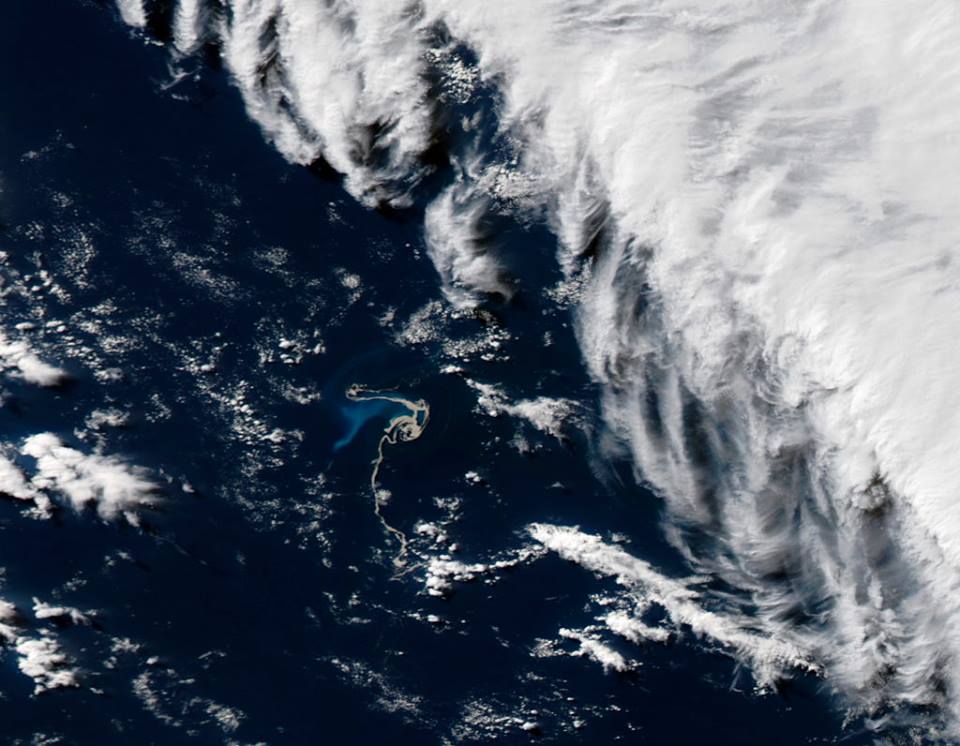 The pumice raft (tan) and eruption plume (white in bottom center-right) from the 2012 eruption of Havre in Tonga/Kermadec arc. This is an example of a pumice raft that was eventually traced to its source.NASA Earth Observatory

This is, by no means, the first time an orphaned pumice raft has been spotted. Back in 2012, a pumice raft was seen by a research vessel in an area near the Kermadec Islands. With a little sleuthing using satellite images, Rob Simmon (Planet Labs) and I were able to trace the source of the eruption to a seamount called Havre (see below) that had no other known historical eruption.

The area where the pumice raft was spotted is bounded by volcanic arcs: Vanuatu to the north, Tonga to the east, Kermadec arc to the southeast. Ocean currents in the area would likely have pushed the pumice from the east to the west,

couldn’t find any evidence for eruptive activity going back all the way to early October.

So, they could have been the source and we might never see the surface manifestation of the eruption. Or, the pumice might have been from a hitherto unknown (or underappreciated) submarine volcano in the Tonga arc, which makes finding the source especially challenging with so much ocean to cover.