ZetaTalk: Heralding: The best way to counter arguments is not to point to the past but to start recording the present. All the trends and signs will only acerbate, with the oceans warmer still, the weather more erratic and unpredictable still, and the Earth gradually slowing in her rotation more and more measurably. If one gathers these statistics now, and gathers them yearly, the trends will become a clear pattern. Thus, the arguments will be with people now living, and with statistics gathered by the same methods 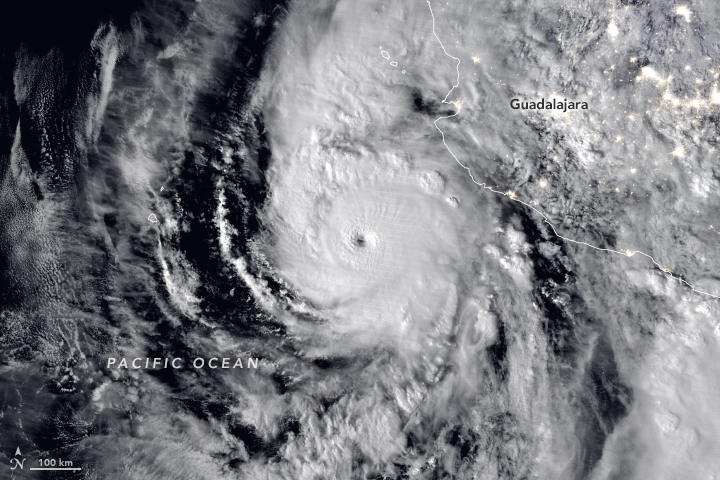 A potent storm is poised to hit Mexico. In this nighttime image acquired at 3:50 a.m. local time (08:50 Universal Time) on October 22, 2018, Hurricane Willa appears off of the country’s Pacific Coast. The image was acquired by the Visible Infrared Imaging Radiometer Suite (VIIRS) on the Suomi NPP satellite. Source of image: NASA Earth Observatory

The most remarkable fact for this season is Accumulated Cyclone Energy (ACE):

The Atlantic hurricane season certainly hit the United States hard this year. First came Florence. That storm dropped 91.3 centimeters (35.9 inches) of rain. Then Michael roared ashore as the third most-intense U.S. tropical cyclone to ever hit landfall. But the eastern Pacific had it even worse. As of October 22nd, this region recorded its most energetic cyclone season on record.
<...>

Keep in mind, there is still another month left in the eastern Pacific hurricane season. Despite this, 2018 has already claimed the top spot since recordkeeping began. It’s above the season-long 295 ACE units counted in 1992, and the 297 tally for 2015. In the coming weeks, this year’s ACE total could top 350 or 400! Simply stated, we’re in uncharted territory. <...>" - sciencenewsforstudents.org [1]

But what caused it? According to scientists, unusually warm water and anomaly in the atmosphere: 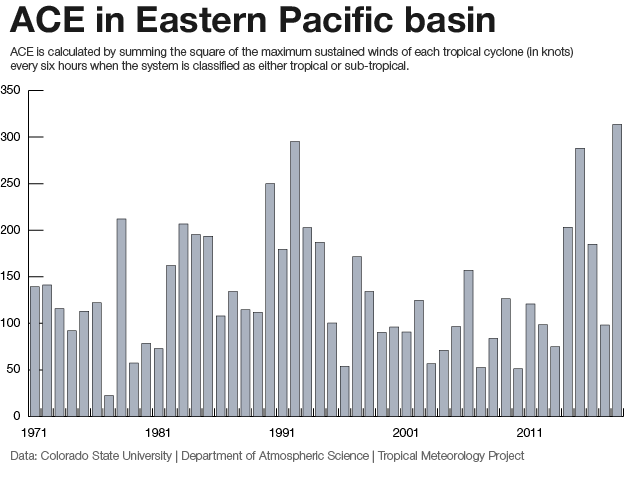 "So what made 2018 so wild? Klotzbach points to two things. One is low amounts of wind shear in the upper atmosphere. The other is far higher-than-normal sea-surface temperatures.

Sea-surface temperature changes from normal over the Pacific Ocean (red is hotter than normal; blue is cooler than normal). The white area at right shows U.S./Mexican West Coasts. The especially warm ocean water in 2018 boosted the intensity of an already booming hurricane season. The colors represent the change — in degrees Celsius — of sea-surface temperatures from the 1980-to-2010 average for the same time of year. That 30-year period is called a “climatology.” It’s the benchmark against which scientists compare modern-day events. NOAA/NWS/Philip Klotzbach. Source of images: sciencenewsforstudents.org

“The northeast Pacific was quite toasty this year,” he says. “Sea-surface-temperature anomalies were 1 to 1.5 degrees Celsius [1.8 to 2.7 degrees Fahrenheit] warmer on average across the basin.” That’s a primary factor, he explains, behind the growth of cyclones.

But there was something else. 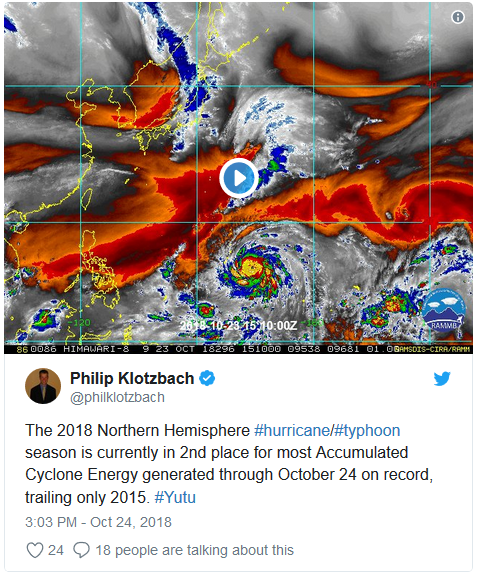 Weaker-than-normal winds in the upper atmosphere led to a drop in wind shear. That’s a turning of the winds with height. If the winds veer too much, they can tear apart an infant storm before it can grow into a towering monster. But Klotzbach points out that wasn’t an issue this season. “We had reduced shear throughout the [eastern Pacific] basin for most of this year.” <...>"

Another anomaly is the hurricane 'formation rate' and 'lifetime':

"And that’s not the only fingerprint of climate change showing up in big storms. More and more hurricanes erupt into monsters within a day or less. That fast change is called rapid intensification. The pattern marks cyclones whose winds pick up by at least 55.5 kilometers (34.5 miles) per hour within 24 hours. Hurricane Florence did this in 2018. So did Michael; it revved up from a weak tropical storm to a Category 4 cyclone in less than two days. And it continued to gain strength right up to its landfall in the Big Bend of Florida on October 10. By then, it had winds as strong as a tornado’s." - sciencenewsforstudents.org [1] 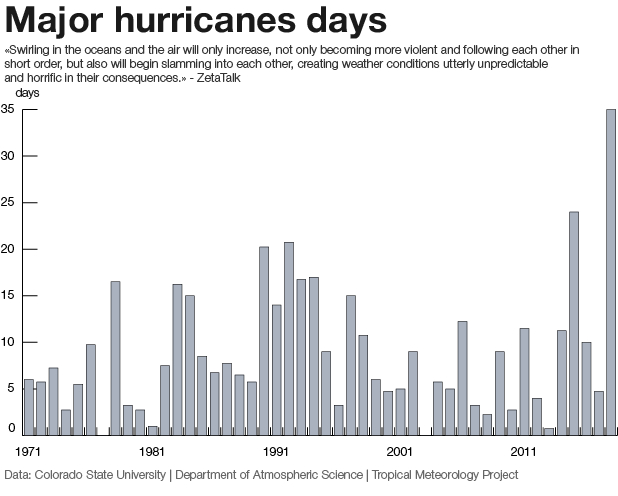 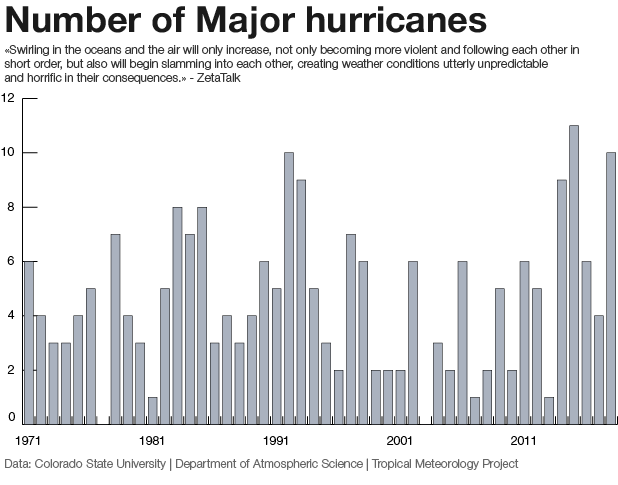 We can see that the seasons 1992 2015 and 2018 have about the same amount. This suggests that the number of strong (major) hurricanes increases.

"3 October, 2018. Two of the Three Busiest Eastern Pacific Hurricane Seasons Have Now Occurred in the Past Four Years

While equatorial Pacific water temperatures have yet to reach El Niño criteria, in some sense, the atmosphere is already behaving as if one is in place, Dr. Mike Ventrice, an atmospheric scientist at The Weather Company, an IBM Business, pointed out in mid-September."- [3] weather.com

As well noted in this article, already two record hurricane seasons have occured in recent times.

Another incredible record was noted by the scientist Philip Klotzbach: For the first time in history, the Accumulated Cyclone energy will have above average in all the basins of the Northern Hemisphere! This is pretty unusual! But the oddities don't end there. Although the current Atlantic hurricane season was not strong, there are some special features: 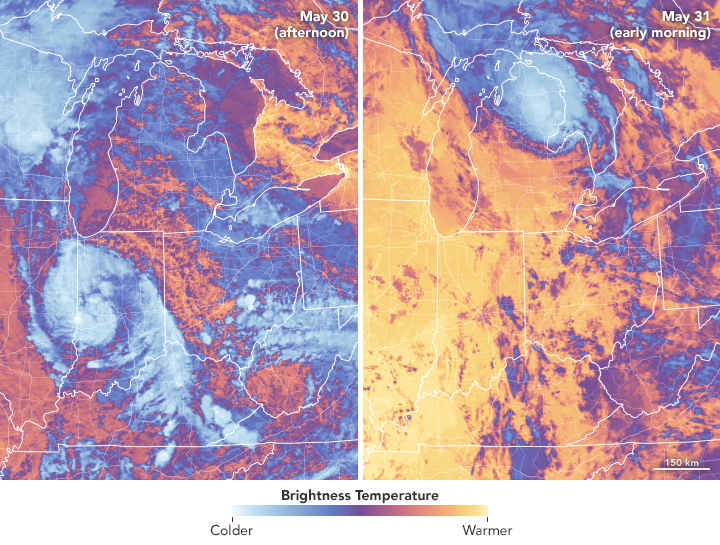 After Subtropical Storm Alberto made landfall in the Florida Panhandle in late May 2018, the storm was downgraded to a subtropical depression. Alberto delivered wind and rain to large swaths of the southeastern United States before spinning up toward the Midwest and Great Lakes.The Moderate Resolution Imaging Spectroradiometer (MODIS) on NASA’s Aqua satellite captured these images of the storm. The false-color views use MODIS band 31, which measures infrared signals known as brightness temperature. This band is useful for distinguishing cooler cloud structures from the warmer surface below. Image source: NASA Earth Observatory

Another unusual aspect of Alberto is that it held on as a tropical depression all the way into Michigan, finally becoming a remnant low near Saginaw early May 31. The season total of seven subtropical storms is the most for any hurricane season on record, according to Dr. Phil Klotzbach, a tropical scientist at Colorado State University. This year easily beat the previous record of five storms that were designated subtropical at some point during their existence in the 1969 hurricane season.

3) In September's first week, Florence was in a spot in the Atlantic that's typically far enough north for a hurricane to curve out to sea and not impact the United States.

No tropical storm or hurricane in recorded history has passed within 100 miles of Florence's location on Sept. 7 and still made a United States landfall. But Florence defied what weather history statistics tell us after weakening temporarily when it encountered hostile upper-level winds. That weakening phase allowed Florence to follow a steering flow that would bend it west for several days.

Then, abnormally strong high pressure aloft for mid-September blocked Florence from turning out to sea and instead steered it into the Carolinas in an agonizingly slow crawl, triggering disastrous flooding." - [5] weather.com

Also on the ning blog Wild Weather a couple of comments were made:

Earth wobble is getting stronger!