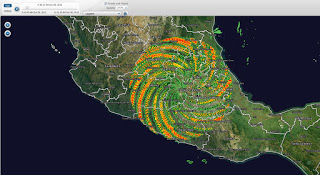 This report is apparently based on radar circles, similar to what happened in Australia's west coast in the past. But this IS news in that radar circles had only been presumed in Australia, and here they had appeared in Mexico too!

The following video , where they talk about the alleged appearance of a spiral of light (such as Norway , 2009 ) in the skies of Oaxaca in March. They are based on the story of a mystery program broadcast in Russia. The video shows the Russian television is an animation that runs on youtube since 2009, and obviously refers to the spiral seen in Norway. 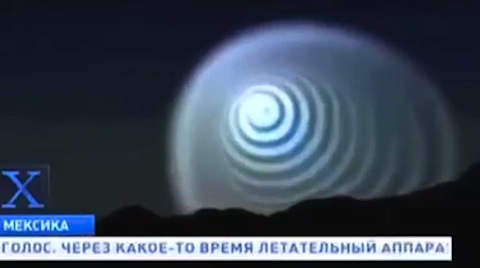 The display over the skies of Norway are not noctilucient clouds, which are ice crystals in the clouds catching the light, nor are they earthquake lights. They are also not the smoking and curling light towers caused by methane gas released during Earth movements, suddenly catching fire while aloft in the sky. The Norway display is akin to the neon clouds seen on occasion since Planet X arrived in the inner solar system in 2003 and the grease in the tail of Planet X has polluted the Earth's atmosphere. The neon appearance is caused by a chemical reaction, akin to man's familiar light sticks. Up until recently, such neon displays required a light source in order to be seen, lit in the dawn or dusk by sunlight or the lights from a city. What has occurred over Norway is a neon cloud, a grease cloud, lit by the electrical charge from the tail of Planet X. Why the great swirl in the clouds around the swirling neon display? An electrical charge in the sky is not a static matter, as the path of lightning shows. Lightning is an accumulation between moving air masses that suddenly builds to the point where a torrent of electrons is on the move. But what if the charge does not accumulate in one place, but is constantly present over a broad area? As with all swirls that develop in nature, they start with a small movement in one place that creates a vacuum pulling matter behind it, and thus builds. Galaxies swirl. Water going down a drain swirls. And these large charged atmospheric swirls are chasing after some part of the tail waft that is more or less charged than the surrounding atmosphere. What occurs at the center of such a charged swirl is more electrical charge than the surrounding swirl, thus the center becomes a neon cloud that can be seen even at night, and wants to discharge, ground, in the Earth.