Rescuers examined all the houses where earthquake reports came from. Source of image: express-novosti.ru

ZetaTalk: Pole Shift Note: written prior to July 15, 1995 : The heat of land masses above subducting plates where friction can cause the ground to melt, would be so affected.

September was abnormal for the Urals. The record earthquake shook the region. The strongest in at least 100 years.

Damage from earthquake in Ural. Source of image: 11.rodina.news

<...> It is known that in the entire history of seismic observations this earthquake was the third in the Sverdlovsk region. Oleg Kusonsky, head of the Artie observatory at the Institute of Geophysics, Ural Branch of the Russian Academy of Sciences, said in a conversation with a correspondent for URA.RU that the most powerful shocks were recorded in 1914 near Bilimbay. Their strength reached six points. The second time they were observed in 2015 under Sredneuralsk, the amplitude is only four points." - [1] ura.news

Scientists have called it unique for many reasons.

"7 September, 2018. Google translate. "A unique case": after the earthquake in the Chelyabinsk region, another 30 aftershocks occurred

Damage from earthquake in Ural. Source of image: dostup1.ru

Perm scientists for two days already recorded 30 aftershocks of varying intensity after the earthquake that occurred in Katav-Ivanovsk on the morning of September 5. They will continue for at least another couple of days and gradually disappear. ">About this 74.ru told the employee of the laboratory of natural and man-made seismicity of the Mining Institute of the Ural Branch of the Russian Academy of Sciences Philip Verkholantsev.

These are repeated seismic events of small amplitude.

- In the Urals, this experience has not yet been. This is the first such aftershock earthquake. It is generally unique. All the more instrumentally fixed, - commented Philip Verkholantsev. - Before that, the largest instrumentally recorded earthquake was “Bilimbaevskoe” in 1914. There, the magnitude was about 5.2. But the aftershocks did not have it, or they were not recorded. There were no aftershocks in all subsequent earthquakes. Therefore, it is difficult to say how long this process will continue. But they will weaken. And I think that in the coming days, local residents will no longer feel them, and we will register them only with the help of equipment." - [2] 74.ru

An earthquake of magnitude 5.6 was amazing (largest instrumentally recorded), with an aftershock of 4 mag which is simply unprecedented for the Ural Mountains. What a surprise when in a few weeks the Urals suffered from an earthquake again (29 September)! Although scientists have said they do not expect further shocks.

"30 September, 2018. Google translate. The second earthquake in the month in the Urals surprised even seismologists 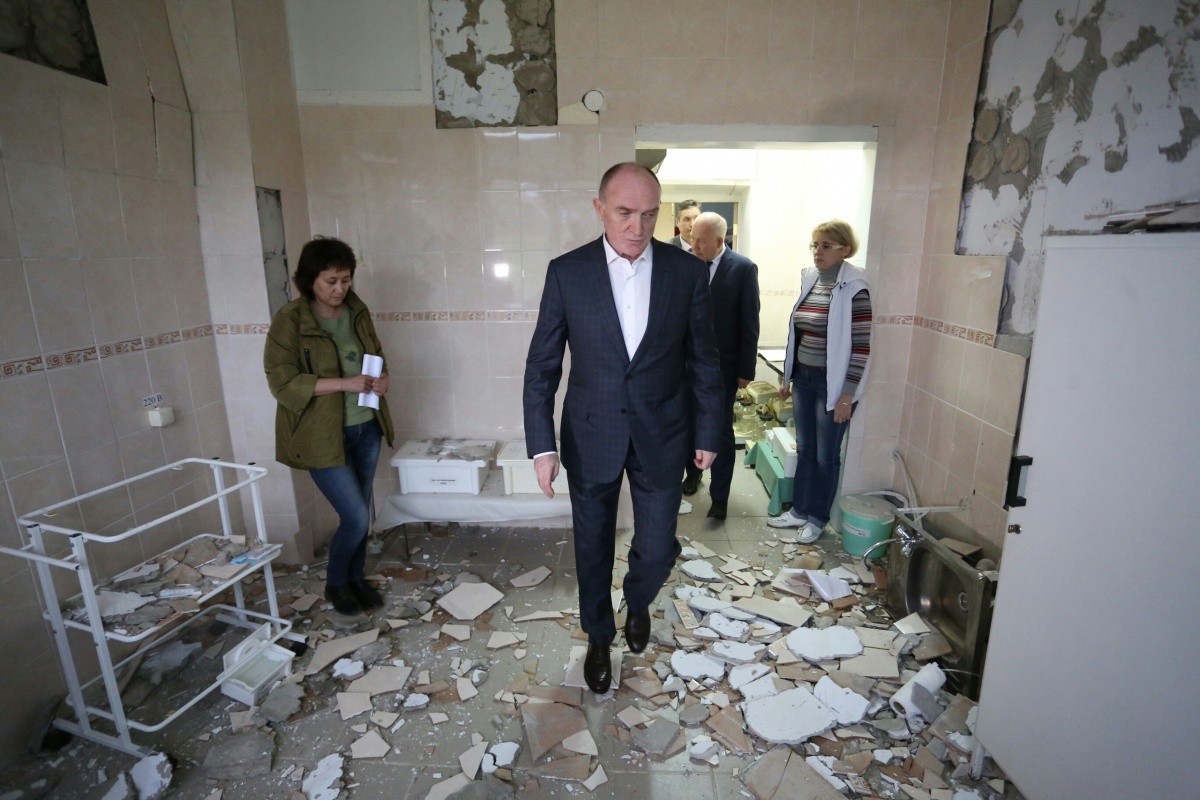 The second earthquake in the Chelyabinsk region for a month surprised even seismologists far beyond the Urals Federal District. On September 5, the Urals suffered the worst earthquake in 100 years - the magnitude of shocks reached 5.5 on the Richter scale. And on September 29 thrusts resumed - by a force of 4.5 points. There are no victims and injured. In the monitoring sector of the Ural region at the Institute of Geophysics, RAS, they have already made a mistake with the forecast, saying that they do not expect new incidents. However, shocks again occurred in the area of ​​Katav-Ivanovsk at a depth of 10 km. Why the earthquake repeated in the Urals and whether to wait for a new emergency, told Alexey Zavyalov, head of the laboratory of continental seismicity and prediction of seismic hazard at the Institute of Earth Physics, in an interview with URA.RU.

- Alexey Dmitrievich, how can the tremors, which thousands of Ural residents feel, be explained in simple language?

- The situation is really unusual: the second earthquake in just a month. But nature is multifaceted, with age I understand this more and more. What is an earthquake - is a consequence of the gap that has arisen in the depths of the earth's interior. There was suddenly a crack. This occurs when the rocks do not have enough strength to contain the stresses that have accumulated over decades. And in the case of the Urals, perhaps for centuries. The crack begins to emit elastic waves that are felt on the earth's surface as an earthquake." - [3] ura.news

So how rare are earthquakes in the Urals? 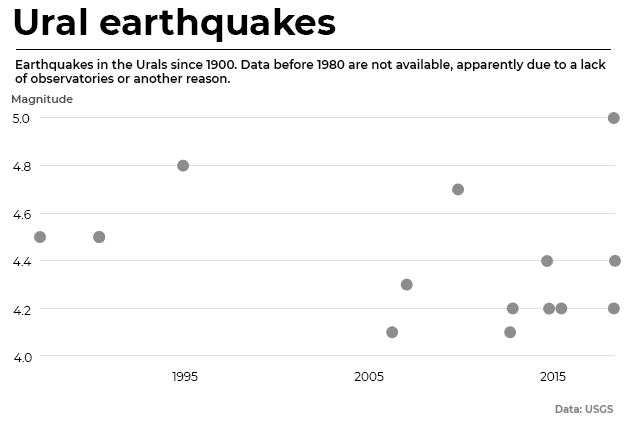 We see that earthquakes in the Urals seem to be increasing. But the story is not over.

A strange thing happened the day after the earthquake. Cover-up seems to act openly.

7 September, 2018. Google translate. The observatory in the Urals will no longer be able to record earthquakes 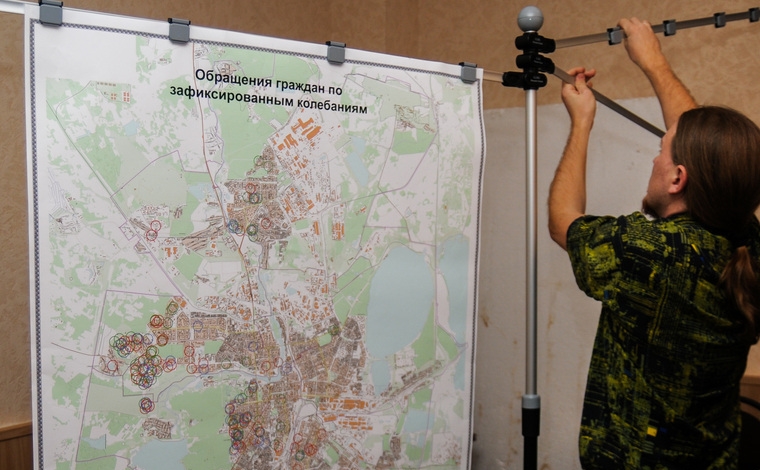 Track tremors in the observatory will no longer be able to. Photo: Vadim Akhmetov. Source of image: ura.news

One of the largest geophysical observatories in Russia, in the village of Arti, Sverdlovsk Region, was on the verge of closure. This happened just the day after a major earthquake in the Urals.

“On September 5, there was an earthquake, and yesterday, on the sixth, came from the Obninsk Federal Research Center and dismantled the equipment. Colleagues from Obninsk installed this seismometer here in 1988. He worked for exactly 30 years, and now they have taken him away. Buy a new device, we have no money. We have our own base of the complex, and the new seismometer costs about 600 thousand rubles. To conduct observations at different frequencies, you need at least three seismometers, that is, almost two million rubles, ”said URA.RU at the Institute of Geophysics, UB RAS.

According to scientists, they have long been threatened to pick up the equipment, since the Obninsk center intends to arrange its own seismic station in the Sverdlovsk region. What is the purpose, the Ural scientists do not understand: why build a new expensive object, if there is a ready-made observatory that has been operating since 1969 and has scientific authority both in Russia and abroad in the academic world?" - [4] ura.news

All this is very strange. They just came in and took the equipment without explanation. But that is not all. 14 October, the scientist dies in Irkutsk.

The circumstances of death are unknown... 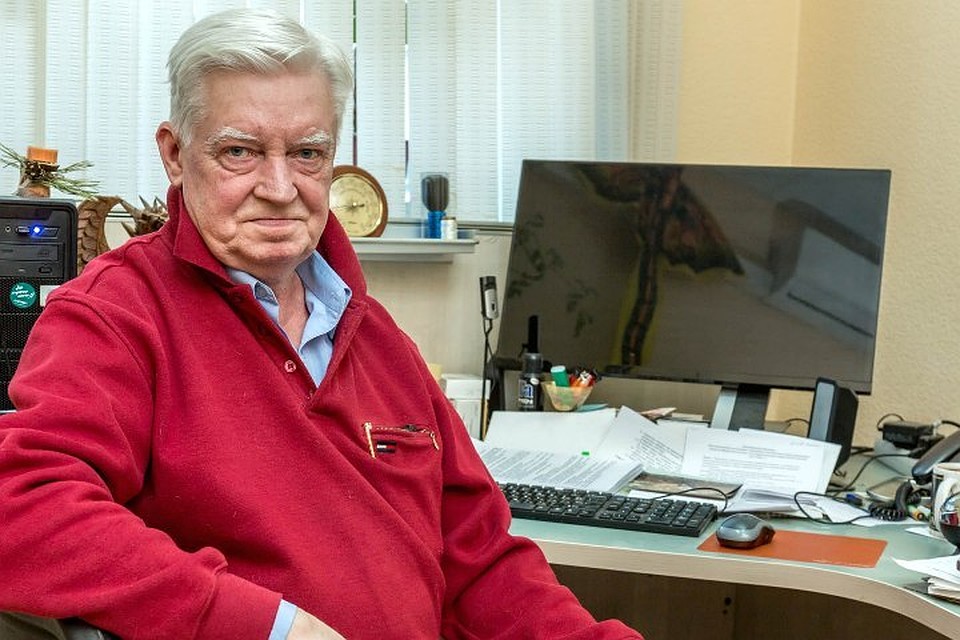 Cyril Levy died: a famous geologist, a scientist from the Irkutsk Institute of the Earth's Crust. Photo: Vladimir KOROTKORUCHKO. Source of image: irk.kp.ru

Kirill Levi died in Irkutsk. A great scientist, doctor of geological and mineralogical sciences, known for always saying that science is the desire of the soul to search for the new. He devoted 40 years of his life to work at the Institute of the Earth's Crust, SB RAS. In February 2017, Kirill Levy celebrated his anniversary - he turned 70 years old." - [5] irk.kp.ru

After the earthquake in Katav Ivanovsk, a landslide or mud volcano formed, no one can understand what it is. Locals report that a strange hum is heard. Cracks in the ground formed.

27 September, 2018. Google translate. After the earthquake, a giant mud slide lands in the South Urals. 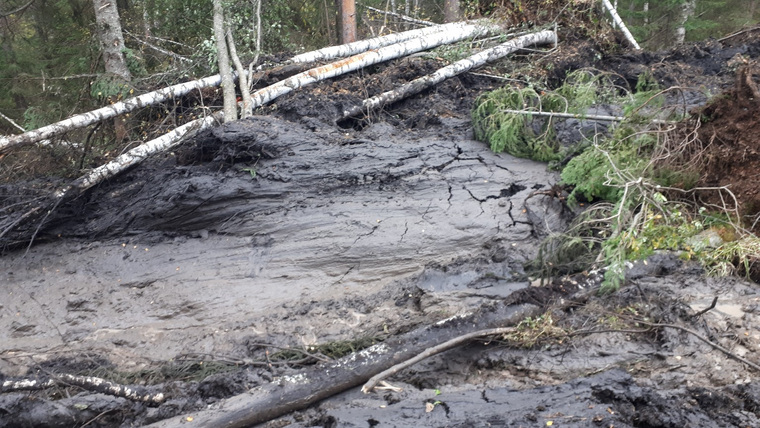 The inhabitants of Katav-Ivanovsk are frightened by a mud landslide, which descends from Peschanaya Mountain, between the town and the village of Karaulovka. In social networks, Chelyabinsk people share photos and videos telling that an earthquake broke in the epicenter, in several places around trees are felled, there are cracks on the ground and a strange hum is heard.

Residents say the effects of the earthquake are horrifying. “There is tin. There the land was sold and the process continues. There is a rumble, and the trees break like matches. If someone thinks that the earthquake is over, take a look and see that everything is going on, ”Katya Yergunova wrote."- [6] ura.news

Later, scientists recognized this phenomenon as unique and recommended that they be included in the program “State monitoring of the state of the subsoil in the Urals Federal District” [7]

Water warmed up in wells

Another oddity, the water is heated in the wells Yuzhnouralsk and Kostanay. Map location: Let's start with Yuzhnouralsk. The water there has already heated up from May and it is still warm. The temperature also increased in the basement of the houses!

"27 August, 2018. Google translate. Abnormally high temperature recorded in the wells and cellars of the inhabitants of Yuzhnouralsk

A strange phenomenon triggered the growth of bacteria dangerous to humans. Source of image: 1obl.ru

Residents of private houses along the streets of Belinsky and Sovetskaya city of Yuzhnouralsk noticed that water was heated in their wells. Its temperature reaches 40 degrees.

When the watering season began, we found that for some reason hot water was coming from the well and sounded the alarm, we began to appeal to all instances. - told Igor Sazonov, a resident of Yuzhnouralsk, to the site “First Regional”.

Due to the heating of water in the wells, bacteria began to multiply. Specialists of Rospotrebnadzor found microbes in the water, which make it unsuitable not only for drinking, but even for washing. As it turned out, the lack of drinking water is not the only problem for residents. Because of this anomaly, the temperature in the cellars also increased to 20-25 degrees. People spoil the winter harvesting. The city administration will deal with this problem, now negotiations are underway with hydrogeologists.
<...>

The alleged culprits of the water anomaly in Yuzhnouralsk may be heating networks located near the power plant, as well as a communal accident. But while the exact cause of water heating in the wells could not be established." [9] - 1obl.ru

This of course in itself is not strange. In the end, it may just be a communal accident. But the same thing happened in another city and also not far from the epicenter of a future earthquake.

"29 August, 2018. Google translate. Miracle or anomaly: the water in the well became hot in Kostanay, Kazakhstan

Water in one of the old wells at the summer cottage in Kostan inexplicably heated, writes the local portal "Alau".
The owner of the garden in the garden community "Michurinets" Natalya Stoyanova said that in the well, which is almost forty years old, the water, usually always cold, since August 22, 2018 has become warm, steam comes from it. At the same time, according to Natalia, the water also gurgles.
Public utilities checked the well and stated that the appearance of hot water in the well is not associated with an accident on the heating network, as the pipes are empty in summer. There was no such case in this region. To find out the reason for water heating, residents are advised to contact the hydrogeological commission.It is worth noting that among the reasons for the emergence of hot water in wells, besides the accident on the water supply system, heating network or pump, there may be penetration of geothermal waters, tectonic shifts, as well as a chemical reaction as a result of decomposition of plants." [8] - ru.sputniknews.kz

Was it a precursor of an earthquake?