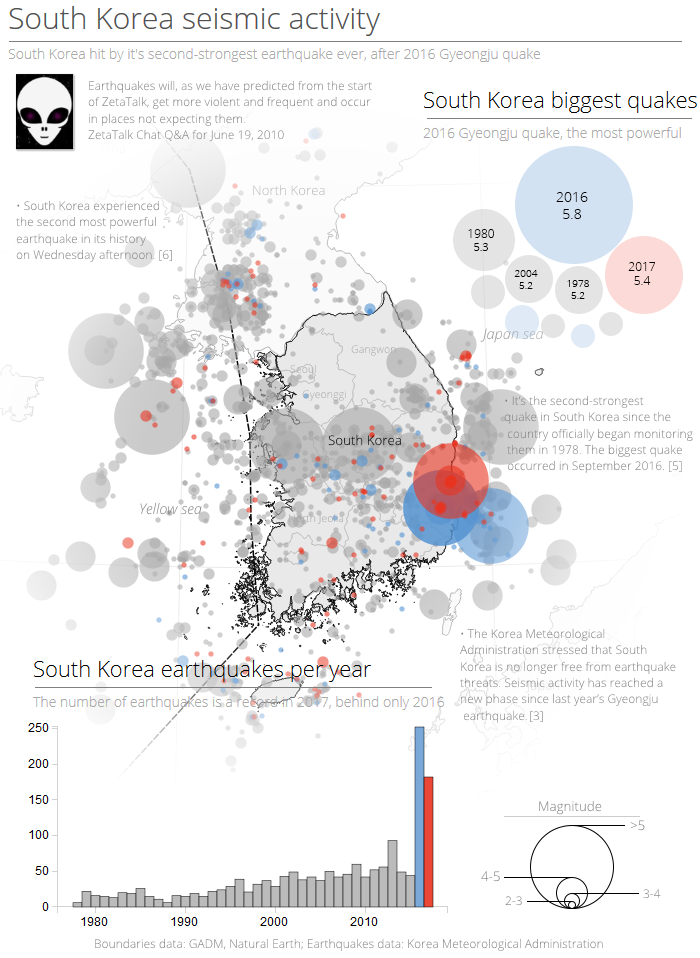 Again, record-breaking earthquake hits South Korea. The recent earthquake in Iran doesn't mean anything compared to Korea quake, as it was second-strongest earthquake in history of South Korea, after 2016 Gyeongju earthquake. This anomaly is comparable only to earthquakes in Oklahoma or 2017 Botswana earthquake. South Korea is traditionally a country with low seismic activity. And again, the Korea Meteorological Administration said, Korea is no longer seismic safe 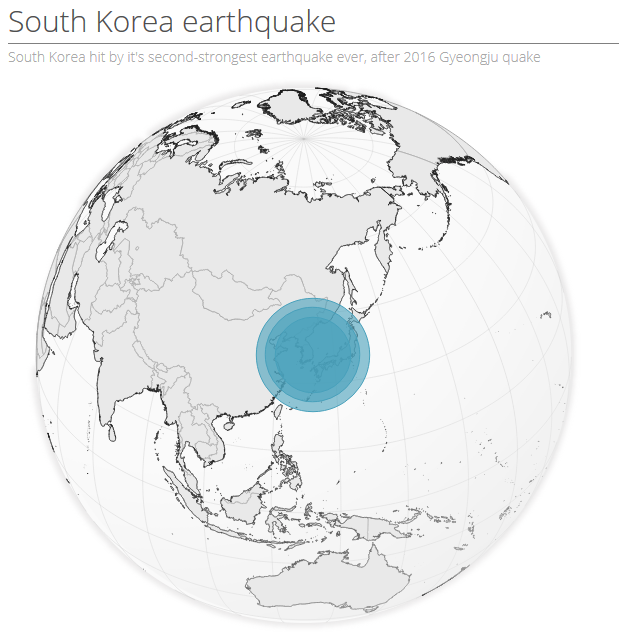 Earthquakes will, as we have predicted from the start of ZetaTalk, get more violent and frequent and occur in places not expecting them. Outside of the warnings that man has learned to utilize, such as screech on the radio or pets running away from home or the physical signs that those who are earthquake sensitives get, there will be no warning. This also applies to those major plate movements which we have described, and which were included in the holographic presentation given to Nancy last November, 2009. All these regions will have increasingly violent and frequent quakes, and then one day blam the plate movement we have described will occur. There may be precursor movements, slight, warning that the plate is getting ready to move. But other than that, no warning. Linear trends since 1978 can be explained by increasing the number of seismic stations and improving the methods of recording earthquakes, while the "explosion" in 2016 and again in 2017 is difficult to explain. 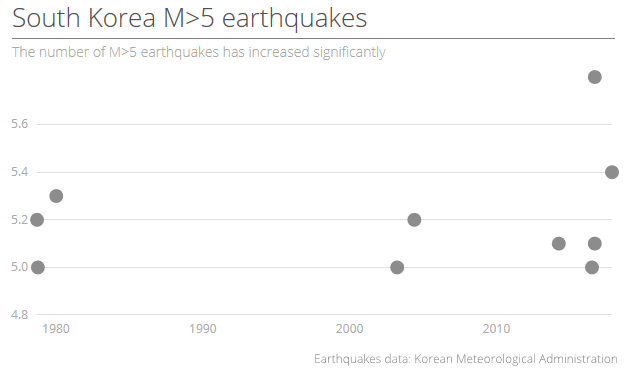 Earthquakes above 5 magnitude are relatively rare in South Korea, but recently they have become more frequent. It was second-strongest earthquake in history of South Korea, after 2016 Gyeongju earthquake.

"15 November, 2017. Another South Korea earthquake more cause for alarm about seismic activity 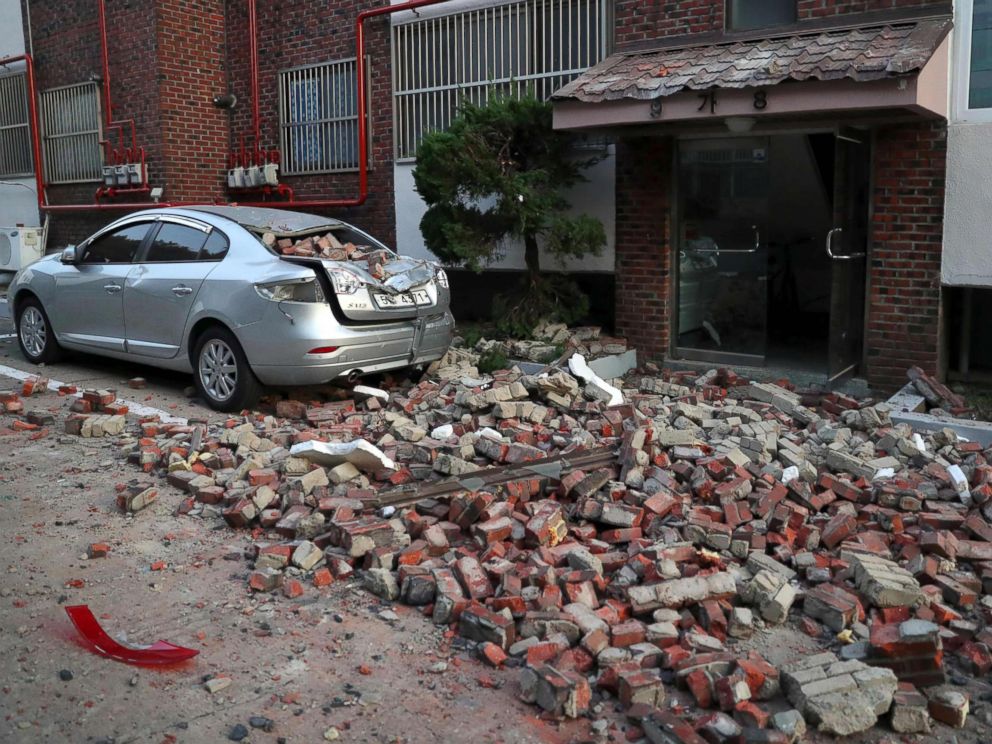 AFP/Getty Images. A car damaged by falling bricks after a 5.4-magnitude earthquake is seen in the southeastern port city of Pohang, Nov. 15, 2017.

A magnitude-5.4 earthquake shook southeastern South Korea today, marking the largest in the nation since last year’s trembler in nearby Gyeongju.

A total of 139 quakes of magnitude-2 and above have been detected this year alone, which is more than twice the historical average. South Korea had been known to have little seismic activity compared to neighboring Japan." [3] - abcnews.go

The Korean Meteorological Administration actually confirmed that this is a natural earthquake:

"“The earthquake is the second-strongest natural earthquake to take place in the Korean peninsula since last year’s quake in Gyeongju,” the meteorological administration said." [3] - abcnews.go

Somewhere we already heard it .. Oh yeah, more recently in 2016. Here are the quotes from the articles koreatimes.co.kr and koreaherald.com: 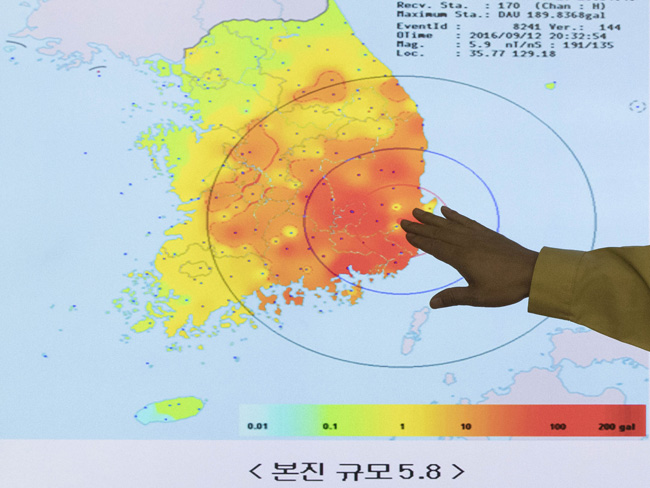 A Korea Meteorological Administration official explains the epicenter of the record magnitude-5.8 earthquake at the agency's office, Monday night. / Yonhap 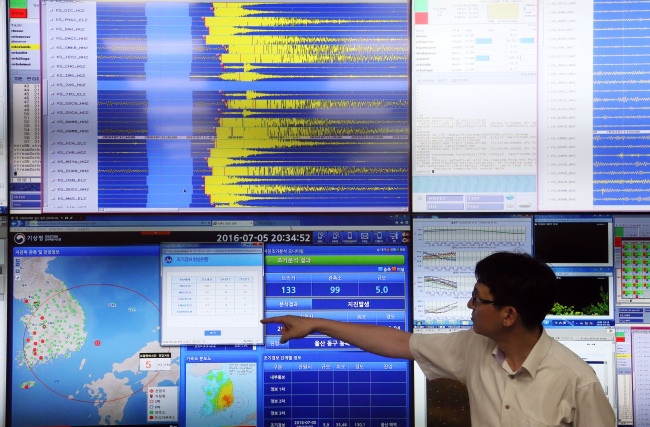 An official from the Korea Meteorological Agency points to the screen while observing data on a magnitude 5.0 earthquake detected near waters off the southeastern Ulsan city on Tuesday evening. Yonhap

Following a magnitude-5.0 earthquake detected near waters off the southeastern city of Ulsan on Tuesday evening, experts voiced concerns that the Korean Peninsula is no longer safe from strong shock waves, calling for prompt disaster preventive measures.
<...>
The Korean Peninsula has long been considered safe from earthquakes, located away from the Pacific seismic belt “Ring of Fire.”

According to the Korea Meteorological Agency, however, small and mid-sized earthquakes have continued to occur over the past three decades. A total of 1,212 earthquakes have been detected since 1978, and six of them have been earthquakes with a magnitude exceeding 5.0.
<...>
“We have been recently detecting frequent occurrences of small-scale earthquakes, although the peninsula is located at the fault zone, which normally leads to brittle shock waves,” said an official from KMA." [2] - koreaherald.com

[6] Persio, S. L. (2017, November 15). South Korea was hit by its second most powerful earthquake to date. Retrieved November 18, 2017, from http://www.newsweek.com/rare-powerful-earthquake-strikes-south-kore...

See the latest new ZetaTalk on the S Korean quakes ..