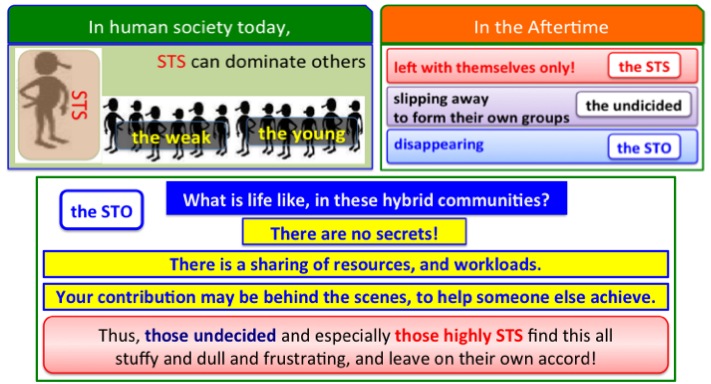 For my understanding I made a chart from "ZetaTalk: Sorted Out" shown below. 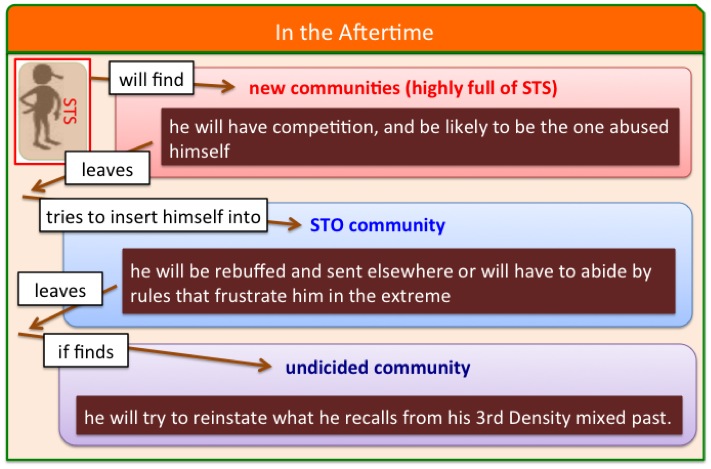 Note: added during the May 3, 2003 Live ZetaTalk IRC Session.

Life in a hybrid community would not be something desired in any but a highly Service-to-Other individual. We have stated that polarization will be natural, after the shift, with those undecided leaving highly Service-to-Other communities, for these same reasons. Those highly Service-to-Self naturally leave a group highly Service-to-Other when they cannot dominate or control them, as the incessant attention to others, to the well-being of others annoys them. In human society today, normal for 3rd Density existence where the orientation decision is the prime lesson to be determined, Service-to-Self can dominate others. They migrate to where this domination has the least resistance, among the weak, the young, etc. If in a situation where they cannot rule, dominate, they move on seeking a better setting. Thus, a man who smacks his wife and children about when they displease him, his endless demands for immediate satisfaction of his wants and needs, leaves this family if he comes under community surveillance or policing. He lines up a new wife, in another community, and starts this practice again.

Now, the undecideds will find their life much as it is today, in human society, regarding rules and societal expectations. The Service-to-Self will find life unlike what they recall, as they will be the picked upon where they expect to be the dominant person, but this is experience in preparation for their next lifetimes, so just as well. And the Service-to-Other will find they are meeting new neighbors, the hybrids and other visitors from elsewhere.

What is life like, in these hybrid communities, that Service-to-Other desire this and others do not? We have mentioned this already within the body of ZetaTalk, but will list the highlights again. There are no secrets! Telepathic knowledge of the others, their needs, their desires, their thoughts, is utter and open. This means that you are aware of anothers needs, and can respond, but this also means that unlike human society today, others are aware of your resentments, your jealousies, and those thoughts you might like to keep secret. There is a sharing of resources, and workloads, so that what needs to be done is addressed, rather than what someone might have planned for their day. This means that your personal agenda, your mission where you will be the star and can feel accomplished, might not be what is considered important! Perhaps you planned to continue writing your book, but must put this aside to harvest fish. An adjunct to this is that taking credit, getting your name in lights, is not considered a necessary part of the action. Your contribution may be behind the scenes, to help someone else achieve, as they are more suited to being the spokes person than you! Where in human society today this is a big issue, in Service-to-Other society it is a point of satisfaction to help others, the credit and the stage not being the big issue.

Thus, those undecided and especially those highly Service-to-Self find this all stuffy and dull and frustrating, and leave on their own accord!

Thank you. It doesn't quite answer my question, but it helps.

Here is ZetaTalk about how some of those new to 4th density STO find this openness distressing ,but there is a solution

I have a question regarding this telepathic knowing of each others thoughts.

Although I have no secrets whatsoever I think it would still mean an invasion of my privacy? If I am thinking how grateful I am does anyone have to know? And maybe I do not want help for something?

Will there be a way to not let people into your mind? In STO societies?

Thank you Kojima, The chart that you made on March 3rd and this one March 7th would be wonderful for someone to make available to everyone wishing to belong to their group. We can all judge ourselves and decide to make the necessary adjustments. These charts could spark an undecided person to get a healthier view and set themselves on a better path, receiving more light and enjoying it and wanting to be STO.  Complementing and singing or whistling while working makes time pass pleasantly.   These charts were very good.  Thanks again