There's been talk of an event happening this month which has been dubbed as a surefire sign - one that will not be misunderstood by many - relating to the Pole Shift. I understand that TPTB are ready to blame the Sun for a lot of things related to Planet X even though at this time the Sun is rather inactive in their respective acquiescence. Does this have something to do with Planet X coming into full view and is this BBC News article simply part of cover up for such a thing? [and from another] http://www.washingtonpost.com/blogs/blogpost/post/solar-storm-kony-2012 Radiation from the flare has already caused blackouts of high-frequency radio frequencies used by aircraft flying over the north and south poles, according to the center. The flare is categorized in the X-5 class, and X is the strongest category on scientists' scales. [and from another] Solar Storm Passes without Incident so Farhttp://www.bbc.co.uk/news/science-environment-17295337 [Mar 8] A solar storm in the Earth's magnetic field has largely passed, but adverse effects could still occur. [and from another]http://en.wikipedia.org/wiki/Solar_flare The most powerful flare ever observed was the first one to be observed, on September 1, 1859. The flare was visible to a naked-eye (in white light), and produced stunning auroras down to tropical latitudes such as Cuba or Hawaii, and set telegraph systems on fire. In modern times, the largest solar flare measured with instruments occurred on November 4, 2003.

It is the Solar Maximum. For those who don't know what this means, the Sun has 11 year cycles, sometimes extended by a couple years, during which it goes through what is called the Solar Minimum where sunspots and solar flares are diminished to the Solar Maximum where the opposite is expected. This past solar cycle has seen little activity, a remarkably low sunspot count, and any solar flares developing now during the maximum desperately anticipated by NASA who planed to blame the Sun for Earth changes caused by the near presence of Planet X. Compared to the last Solar Maximum in 2000, the 2012 show has been a disappointment.

But wait! An X class solar flare has arrived! Breathless to divert the vague unease of the populace, who have been uneasy about the weather extremes and noticing the Sun and Moon out of place lately, they announced that certain disaster was about to befall mankind. They've been announcing this since early 2009. Please, please if only the Sun would cooperate! Please note that X class flares are normal during a Solar Maximum, and this is thus nothing unexpected.

Panic runs in the halls of the cover-up over Planet X, especially since we stated publicly on March 3, 2012 that the Council of Worlds has announced a war on the cover-up, though this was discussed prior to March 3 among the ning moderators and picked up by the establishment snoops. What the Council of Worlds is planning is not known by mankind, and thus extreme anxiety has gripped those in charge of the cover-up. Thus they initiated a take-down attempt on Nancy's ZetaTalk Mirror Sites and are running like Chicken Little screaming "the Sun is coming, the Sun is coming!"

Current solar maximum is more like a solar minimum. 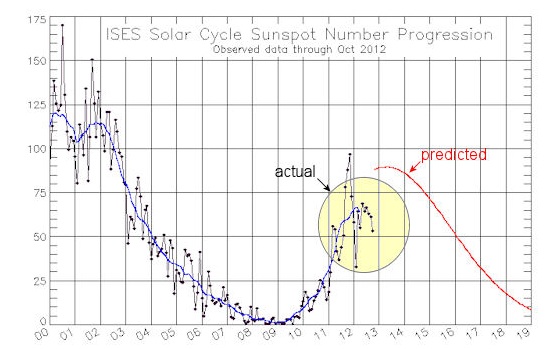 Still trying to make out that the event was more than the non-event that it turned out to be - claiming that a couple of flights were diverted as a result.

Although the article tries to suggest in its title that it caused havoc for the airlines!