Can Zeta comment? Other people notice this, plus we taking about entire planet vibrations and that is not a small thing. Is a new threshold/stage? The Schumann Resonance monitoring graphs is picking up an short burst of high frequency that I did not see it before. Is very rhythmic rattling (see the lines). Is about 100 for each 24 hours, started at the end of last month  April 2019 and it seems that is going steady in the last days.  The Graph that shows the 2-3-4 May 2019 is very obvious the lines.  I modified the graph 27-28 April 2019 for emphasis. Before use to have that overall blue in the graph see 10-11-12 April 2019! 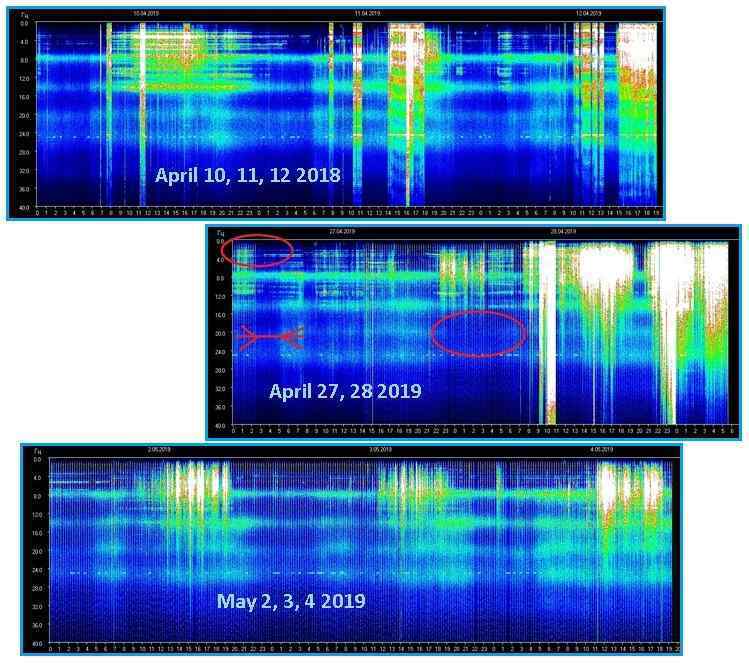 We have spoken of the electronic screech produced from compressed rock, when air pockets in the rock are squeezed so as to allow electricity to flow through the rock without resistance. As the Earth’s crustal plates are increasingly shoved against each other by the increasingly violent daily Earth wobble, this screech has likewise increased into a crescendo. Why is this new vibration in the electro-magnetic space between Earth and its ionosphere so regular? It is keyed to the rotation of the Earth itself, which creates a tugging.

The screech attaches to the pulse in the atmosphere, which is then jerked apart by the rotation, and then reattaches. This is all driven by the hosing of magnetons coming from the N Pole of Nibiru, which is essentially pointed directly at the Earth at the present time. This is not a steady state, as the charged tail of Nibiru wafts Earth in an irregular manner. Thus the Schumann Resonance charts show the blasts from Nibiru as white hot lines, the pace of electro-magnetic excitation by the increase from 7.83 Hz, and now a vibration in the crust from tugging during rotation.