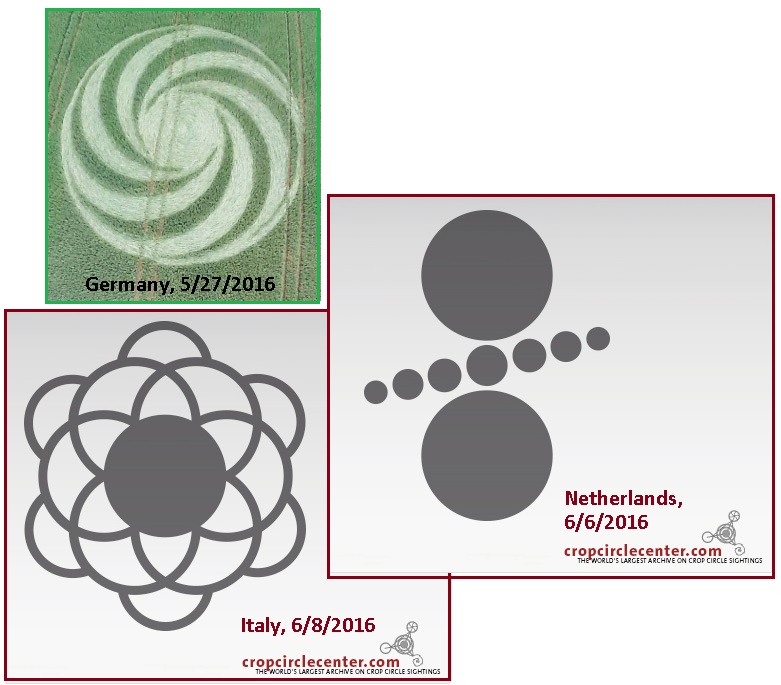 In a year when the Earth changes have increased to the extent that even subconscious knowledge of what is pending is pushing to break through to the conscious, Crop Circle designs have become only a reminder of what the many contactees on Earth have learned from their contact. We have stated in the recent past that fully half the world’s human population are contactees, and this number has risen to be closer to 2/3 of the world’s population. Thus the recent batch of Crop Circle designs laid in Europe each have a singular message, simply stated.

The German swirl shows the retrograde orbit and rotation of Nibiru, which is clockwise, both of which cause a shock to the rotation and orbit of the Earth, which is counterclockwise. Since Nibiru is the larger planet, more massive by 23 times over the puny weight of Earth, this is altogether a shock to the Earth, which is constantly in reactive mode. Both the Netherlands and Italy designs are referencing the Earth wobble, which is a reaction in the Earth to the daily magnetic push of Nibiru.  Italy shows that no matter what direction the Earth takes to evade Nibiru’s push, there will be a bounce back in some manner, with this pattern only getting more extreme. Netherlands shows the degree of tilt possible during the Earth wobble.