Since May 2010, incidents of severe compression have been documented in Magnetosphere Deformations and Earth Wobble Effects and for the first 12 months, between May 2010 and May 2011, severe compressions occurred infrequently – approximately once every four months.  Within six months, this rate increased to 3 times per month and by February 2012, the rate of increase was exponential with 12 severe compressions. 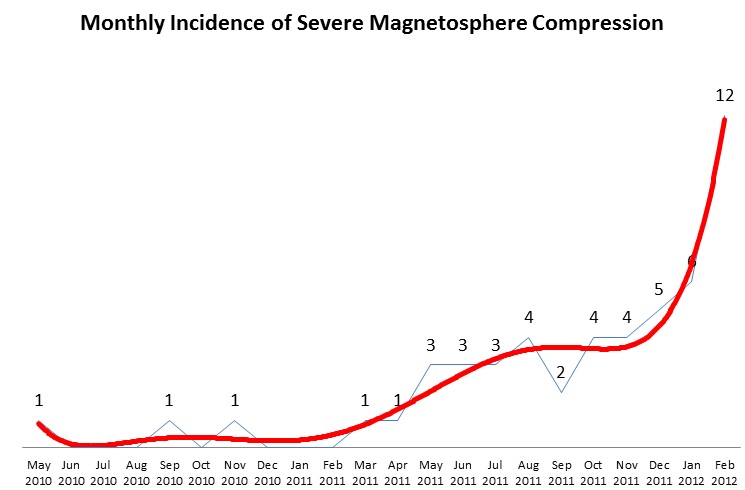 On March 12 2012, MagSim was disabled and remained offline for a period of eight days, presumably in response to the dramatic magnetosphere “reversal”.   MagSim was again offline again between March 22 and March 25 and then permanently deactivated on April 2, 2012.  Although the actual number of severe compressions during March 2012 is unknown since MagSim was unavailable for 11 days, another means of determining when Earth’s magnetosphere undergoes severe compression was discovered.

Since MagSim images are produced from Real Time Solar Wind data measured by instrumentation on the ACE satellite, an empirical analysis of ACE data likewise yields definitive indications when severe compression occurs.  Before such an analysis can be presented with clarity, however, an explanation of magnetic field nomenclature used to define the ACE data is necessary.

A magnetic field can be defined as a vector quantity B that has three directional components in a Cartesian coordinate system: Bx, By and Bz.

The Interplanetary Magnetic Field (IMF) or Bt, is integral to Real Time ACE data since ordinarily the IMF is the primary influence on Earth’s magnetosphere.  The IMF also bears some explanation.  The Sun’s magnetic field has a diploe (N. Pole – S. Pole) component that dissipates as the distance away from the Sun increases.  However, the Sun’s magnetic field also has a much stronger component that is transmitted along the Sun’s particle flow: the IMF, which is 100 times stronger than the Sun’s dipole magnetic field when measured at the Earth’s location in space.

Thus, the IMF can be defined as a vector quantity Bt, having three directional components: Bx, By and Bz.

Values of Bx, By and Bz are derived from measurements taken by instrumentation aboard the ACE satellite and the value of Bt is calculated, as indicated in the ACE magnetometer data, as well as the Real Time Solar Wind data.

Various coordinate systems are used to define solar-terrestrial relationships and transforms are available to transpose data between the different systems. For the purposes of this discussion, Geocentric Solar Magnetospheric (GSM) coordinates will be used since it is common to Real Time ACE data used in this analysis.

The GSM coordinate system is centered along Earth’s magnetic dipole (N. Pole – S. Pole) axis, thus the positive Bz axis (upwards) is located at Earth’s magnetic N. Pole.  The Bx axis, which is perpendicular to the By - Bz plane, runs between the centers of the Earth and the Sun.  By is perpendicular to Earth's magnetic dipole such that the plane formed by Bx and Bz contains the dipole axis.  The difference between the GSM system and other coordinate systems such as GSE and GSEQ is simply different orientations along the Bx axis.

The GSM system is particularly useful for identifying variations in Earth’s magnetosphere since changes along Earth’s magnetic dipole axis (Bz) are representative of changes in the normally cylindrical symmetry of the Sun’s particle flow along the Bx axis.  It also simplifies the three-dimensional movement of Earth’s magnetic field into a two-dimensional depiction in the Bx – Bz plane, as shown in MagSim images.

As the below examples illustrate, values of Bx clearly decrease when Earth’s magnetosphere is severely compressed.  The same is true of Earth’s magnetic field along the By axis, although this is not apparent in the 2-D MagSim images since the By axis is perpendicular to the Bx – Bz plane.

ACE magnetometer data shows that when Earth’s magnetosphere undergoes severe compression, the values of Bx and By are diminished, usually less than positive or negative 1.0 nT and Bz approaches the value of Bt, the Interplanetary Magnetic Field.

This correlation was first observed while MagSim was still operational.  Whenever a severe compression was depicted on MagSim, values of Bz and Bt would merge on the ACE MAG - Bz/Bt plot on SolarSoft.

Values of Bt are indicated by the blue line and Bz values are the green line.

This correlation is also supported by other online sources of Real Time ACE data.

Using a severe compression that occurred on May 3, 2012 as an example, let us begin by identifying the merging of Bz and Bt values on SolarSoft (see the white arrow at upper right in the image below):

We can also see on the Real Time Mag Field plots that values of Bt and Bz nearly merge at approximately 16:20 UTC.

Checking the ACE magnetometer readings, we can verify that a severe compression did indeed occur between 16:19 and 16:24 UTC.  Note that the values of Bz and Bt differ by only 0.2 nT and values of Bx and By are close to positive or negative 1.0 nT. During May 2012, the number of monthly severe compressions increased from 20 to 36. 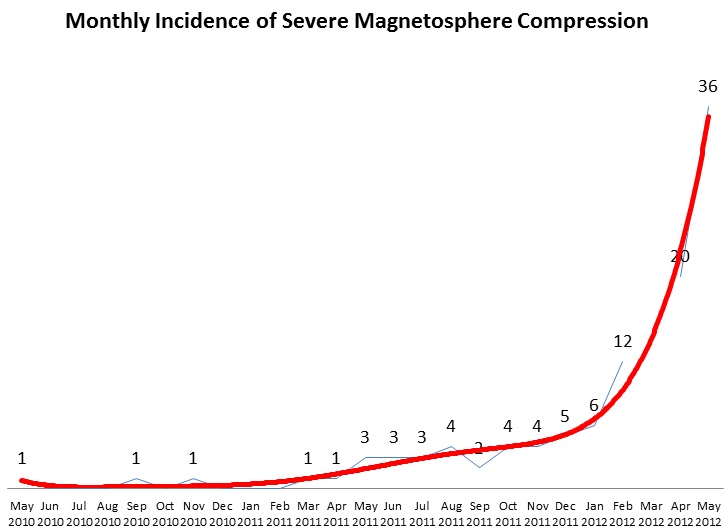 The numbers are in. The monthly severe compressions of the magnetosphere leaped from 20 in April to 36 in May.  Supporting data can be found in the file SevCompMay2012.pdf linked at the bottom of the main body of this blog.

The long wait since Planet X arrived in the inner solar system in 2003 is coming to a close.  Planet X is approaching - dead on and deadly.  Time to get your house in order, if you haven't already done so. Another severe compression today (May 5) at approximately 21:00 UTC: