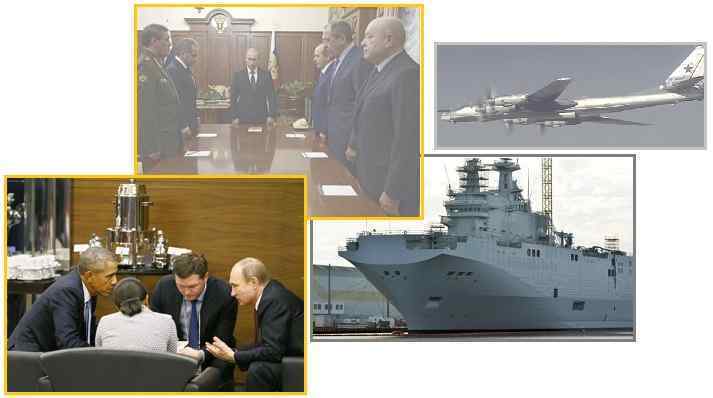 A321 was clearly affected by more than a bomb, as it changed course to head for Cairo, leaving the waters of the Gulf of Aquba, moving slowly for some minutes and reporting mechanical problems before it exploded. Do bombs explode slowly? The fuel pumps were crippled by electro-magnetic pulse (EMP), pumping inadequate fuel during a slowdown. Then, in the flip side of EMP, a pulse occurred, racing the motors in a rush that provided both heat and spewing fuel for the explosion. Nancy clarified in a recent newsletter that any excuse to ground planes or avoid EMP zones will be used now, in future, but no EMP admission should be expected.

Putin is using the downing of the Russian airliner A321 as an excuse to step up the pace in the battle against ISIS.  Was it not just a year ago that France refused to deliver a warship to Russia, citing the Ukraine conflict? Suddenly, as a result of the attack on Paris, France and Russia are partners against ISIS. Of course, Russia too is a target of ISIS, so Putin needs no excuse to step up the pace, so why has the pace been quickened? It is clear during the G20 that Putin and Obama had heads together in a private chat. Both Putin and Obama are prepared to participate in the announce admitting the pending passage of Nibiru, and want ISIS put to rest before then.

Given the state of the planet, with the wobble and Earth changes such as earthquakes and EMP affecting both man and his machinery increasing regularly, at what point are matters at rest enough for the announcement to have a safe place? There will be no such quiet time, no point when migrant distress or sociological restlessness has gone to sleep. No point when the crops are in and panic in the public will not increase the food shortages. Rioting will be on the increase. Demands from all quarters, the “have-nots” making demands on the “haves”, the threat of having a corrupt or short sighted nominee about to become President in the US. All will only increase. In short, the announcement team should just do it, without further delay.