About 300 prisoners escaped from the northern port city of Iquique in the immediate aftermath, he said.

"The fact is, we will know the extent of the damage as time goes by and when we inspect the areas in the light of day," Chile's President Michelle Bachelet said early Wednesday morning. "The country has faced these first emergency hours very well."

Residents in the port city of Antofagasta,calmly walked through the streets to higher ground as traffic piled up in some places.

"Many people are fearful after experiencing the powerful earthquake in 2010, so they immediately fled for higher ground when they heard the tsunami warning," said Fabrizio Guzman, World Vision emergency communications manager in Chile.

"There have been multiple aftershocks and communications have been cut off in many of the affected areas. So people are waiting in the dark hills not knowing what is to come, and hoping they will be able to return to their homes safely."

At one point, the Pacific Tsunami Warning Center issued several tsunami warnings. All of them, including for Chile and Peru, were canceled early Tuesday morning. All tsunami watches, which once extended as far north as Mexico's Pacific coast, were called off as well.

Tsunami waves of more than 6 feet generated by the earthquake washed ashore on the coast of Pisagua, according to Victor Sardino, with the center.

An earthquake of the scale that struck Tuesday night is capable of wreaking tremendous havoc.

So, if the initial reports stand, Chile may have dodged a major catastrophe.

Landslides damaged roads in some regions. Power and phone outages were reported in others.

Chile is on the so-called "Ring of Fire," an arc of volcanoes and fault lines circling the Pacific Basic that is prone to frequent earthquakes and volcanic eruptions.

On March 16, a 6.7-magnitude earthquake struck 37 miles west-northwest of Iquique. A 6.1-magnitude hit the same area exactly one week later.

About 500 people were killed when a 8.8-magnitude earthquake struck Chile on February 27, 2010. That quake triggered a tsunami that toppled buildings, particularly in the Maule region along the coast.

According to researchers, the earthquake was violent enough to move the Chilean city of Concepcion at least 10 feet to the west and Santiago about 11 inches to the west-southwest.

'No hazards' to U.S. coastline

The U.S. National Tsunami Warning Center worked Tuesday to determine the level of danger for Alaska, Washington, Oregon and California, as well as Canada's British Columbia.

Gerard Fryer, a geophysicist with the Pacific Tsunami Warning Center, told CNN there is "clearly not going to be any hazards to the coastline of North America."

The Pacific Tsunami Warning Center was "still evaluating" whether to issue a tsunami warning for Hawaii, said Charles McCreery, the center's director.

He said an advisory could be issued indicating threats for swimmers due to strong currents, "but no real flooding of the land."

Chile's Emergency Office and navy issues a tsunami alert and ordered a precautionary evacuation of low-lying areas on the northern coast, meaning many people could be spending another sleepless night away from their homes.

The aftershock caused buildings to shake and people to run out into the streets in the port of Iquique, which was one of the cities that saw some damage from Tuesday night's big quake. But there were no immediate reports of new damage or injuries from the latest tremor, which was one of dozens that have followed the 8.2 quake.

It was felt across the border in southern Peru, where people in the cities of Tacna and Arequipa reportedly fled buildings in fear.

Authorities reported just six deaths from the 8.2-magnitude quake. It was possible others could have been killed in older structures made of adobe in remote communities that weren't immediately accessible, but it was still a very low toll for such a powerful shift in the undersea fault that runs along the length of South America's Pacific coast.

Chile is one of the world's most seismic countries and is particularly prone to tsunamis, because of the way the Nazca tectonic plate plunges beneath the South American plate, pushing the towering Andes cordillera ever higher.

Tsunami animation from yesterday's 8.2 quake off Chile fails to demonstrate why 3 tsunami buoys in the Atlantic are in event mode. 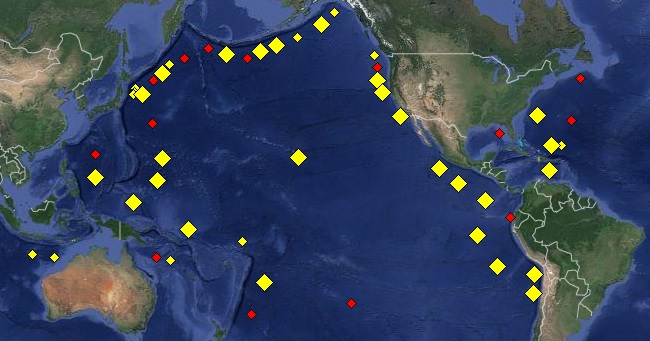 PTWC's near real-time animation for the tsunami from northern Chile on 1 April 2014 resulting from an offshore 8.2 magnitude earthquake in the region. The animation shows simulated tsunami wave propagation for 30 hours followed by an "energy map" showing the maximum open-ocean wave heights over that period.