I hope that you can use this info or can be a question too: I find this article about a global fire 13k years ago.  This event is lining up with so called Younger Dryas (c. 12,900 to c. 11,700 years BP) which is an event associated with Abrupt climate change in many parts of the world. They attribute it to a comet, but it seems that is lining up with the past PoleShifts and the 3,600 cycle that Zeta confirm.  It seems this Younger Dryas is aligning to the same previous Poleshift! My question why so much vegetation burn at that Poleshift it seems that it was a mild shift when North pole move from Scandinavia to Barren Sea, or is something else? Is a factor that at certain Poleshift is more Fires and burning going one!  Is another nexus with the Christian religion and spoken knowledge of the Apocalypses: the lasts apocalypses they been so called Water apocalypses, but the future one will be with Fire! I know that the Poleshifts have both fire and water, but is a possibility that some PoleShift are with more FIRE than others, have to do with proximity and position of Nibiru and the massive tail that Nibiru have? [and from another] http://www.news.ucsb.edu/2018/018701/big-burn Some 13,000 years ago, a cataclysmic event occurred on Earth that was likely responsible for the collapse of the Clovis people and the extinction of megafauna such as mammoths and mastodons. The Younger Dryas Boundary features many anomalies that support the theory of a cometary cloud impacting Earth. The collision triggered a massive biomass burning event, and the resulting soot, ash and dust in the global atmosphere blocked out the sun, which prevented photosynthesis — a phenomenon called impact winter. The scientists also examined the record of atmospheric carbon dioxide entrained in Antarctic ice, which also shows an increase in CO2. [and from another] http://www.journals.uchicago.edu/doi/abs/10.1086/695703 The YD onset also exhibits increased dust concentrations, synchronous with the onset of a remarkably high peak in ammonium, a biomass-burning aerosol. In four ice-core sequences from Greenland, Antarctica, and Russia, similar anomalous peaks in other combustion aerosols occur, including nitrate, oxalate, acetate, and formate, reflecting one of the largest biomass-burning episodes in more than 120,000 y. In support of widespread wildfires, the perturbations in CO2 records from Taylor Glacier, Antarctica, suggest that biomass burning at the YD onset may have consumed ?10 million km2, or ?9% of Earth’s terrestrial biomass. [and from another] https://www.sott.net/article/376761-The-Big-Burn-Global-fire-13k-ye... UC Santa Barbara professor emeritus James Kennett has studied elements found at the Younger Dryas Boundary (YDB). He has collaborated with scientists around the globe, providing evidence at the YDB for a platinum peak as well as for spherules, melt glass, nanodiamonds and other exotic materials that can be explained only by cosmic impact. Kennett and his colleagues have now published new research in the Journal of Geology. In two papers, they analyze existing published scientific data from ice, glacier, lake, marine and terrestrial sediment cores, finding evidence for an extensive biomass burning episode at the YDB layer representing one of the most extreme events - if not the most extreme - ever experienced by our own species, anatomically modern humans. Recent extreme climate and burn events like those in California pale by comparison. [and from another] https://en.wikipedia.org/wiki/Younger_Dryas Physical evidence of a sharp decline in temperature over most of the Northern Hemisphere, discovered by geological research, has been the key physical evidence found for the Younger Dryas. The change was relatively sudden, taking place in decades, and it resulted in a decline of 2 to 6 degrees Celsius and advances of glaciers and drier conditions, over much of the temperate northern hemisphere. It is thought to have been caused by a decline in the strength of the Atlantic meridional overturning circulation, which transports warm water from the Equator towards the North Pole, in turn thought to have been caused by an influx of fresh cold water from North America to the Atlantic. 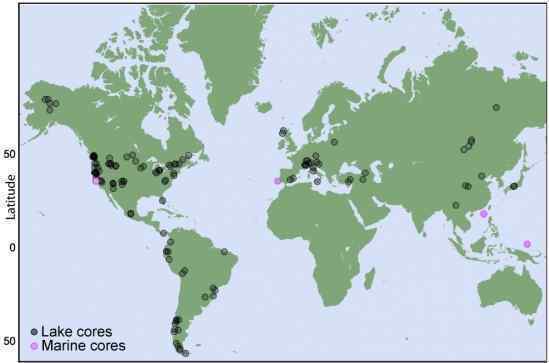 That 9% of the Earth’s terrestrial biomass burned during a prior Pole Shift should not be surprising. The discovery that fires burned worldwide during what is called the Younger Dryas days, when there was an abrupt climate change for most of the Northern Hemisphere, is not surprising. The Younger Dryas, estimated to be between 12,900 and 11,700 years ago, lies between the prior Pole Shift dates of 4 back at 14,400 years ago and 3 back at 10,800 years ago. Carbon dating is not an exacting science, and climate change lags behind, as the Earth retains its warmth or cold, and ocean currents likewise gradually warm or cool.

Though the theory of a comet impact is emotionally easier for scientists to embrace, there can be no other explanation but a passage of Nibiru. Past Pole Shifts are recorded in mankind’s legends and accounts. The Flood is recorded in the Bible and in the Egyptian Kolbrin. There is remarkable correlation in the mythology and recounts from all cultures about past Pole Shifts. The Kolbrin is very specific about fires that ran along the ground, burning everything in its path.

We have explained that Pole Shift fires are primarily caused by proximity to volcanoes, as the petrocarbons in Nibiru’s tail are set afire by the heat of volcanoes and literally drop like a blanket of fire. However, lightning is more universal, and today spark wildfires readily. There will be more lightning during the Pole Shift, as cave men have recorded, so of course fires will be sparked. Those who follow our suggestions to dig a shallow trench out in the open, where the hurricane force winds will not blow them away nor any holocaust consume them, and to be 100 miles from any active volcano, will survive.