Could the Zetas say something about this latest attacks in Paris and the state of emergency that has been declared now in France? It seems to relate with what the Zetas said earlier this year about Charlie Hebdo and the European immigrant crisis,http://poleshift.ning.com/profiles/blogs/european-immigrant-crisis
[and from another]
http://www.telegraph.co.uk/news/worldnews/europe/france/11995541/Pa...
Our France correspondent, reports that the first two victims who turned up to the Hôtel-Dieu hospital in central Paris told doctors and counsellors the attackers appeared to be young French-born. They said that the gunmen in the Bataclan shouted to the crowd: "Allahu Akbar. We're stronger than the French". One person who was at the Bataclan concert venue said: "I saw one of the assailants, very young, a young face, determined, scary.
[and from another]
http://washington.cbslocal.com/2015/11/13/report-at-least-60-killed...
Hollande announced that France will be closing its borders following the attacks. Hollande declared a state of emergency and mobilized the military. Under French law, the state of emergency can be decided in the event of “imminent danger following serious breaches of law and order.” A mandatory curfew has been instituted in Paris. This is the first mandatory curfew in Paris since 1944.
[and from another]
http://live.reuters.com/Event/Paris_attacks_2
Gunmen and bombers attacked restaurants, a concert hall and a sports stadium at locations across Paris on Friday, killing at least 120 people in a deadly rampage that a shaken President Francois Hollande called an unprecedented terrorist attack. Some 40 more people were killed in five other attacks in the Paris region, the official said, including an apparent double suicide bombing outside the Stade de France national stadium, where Hollande and the German foreign minister were watching a friendly soccer international.
[and from another]
http://www.breitbart.com/video/2015/11/13/obama-isis-is-not-getting...
Stephanopoulos asked Obama if ISIS was gaining in strength, to which Obama denied they were. “I don’t think they’re gaining strength,” Obama responded. “What is true is that from the start, our goal has been first to contain and we have contained them. They have not gained ground in Iraq, and in Syria they’ll come in, they’ll leave, but you don’t see this systemic march by ISIL across the terrain. What we have not yet been able to do is to completely decapitate their command and control structures,” he admitted. “We’ve made some progress in trying to reduce the flow of foreign fighters and part our goal has to be to recruit more effective Sunni partners in Iraq to really go on offense rather than simply engage in defense.”
[and from another]
http://www.cnn.com/2015/11/13/middleeast/jihadi-john-airstrike-target/
The United States had been tracking Emwazi closely. He was seen leaving a building and getting into a car. Three drones went after that vehicle, which also had another person inside, and two Hellfire missiles were fired.  A missile hit Emwazi's car directly at 11:51 pm in front of an ISIS court in Raqqa. Citing a source in ISIS' de facto capital, the same group said that ISIS militants then ringed that vehicle and two others that had been struck to prevent anyone from getting closer.
[and from another]
http://unfccc.int/meetings/paris_nov_2015/meeting/8926.php
The twenty-first session of the Conference of the Parties (COP) and the eleventh session of the Conference of the Parties serving as the meeting of the Parties to the Kyoto Protocol (CMP) will take place from 30 November to 11 December 2015, in Paris, France.
[and from another]
http://www.nytimes.com/2015/11/13/world/middleeast/sinjar-isis-iraq...
Kurds retake strategic highway in Iraq’s north from ISIS. 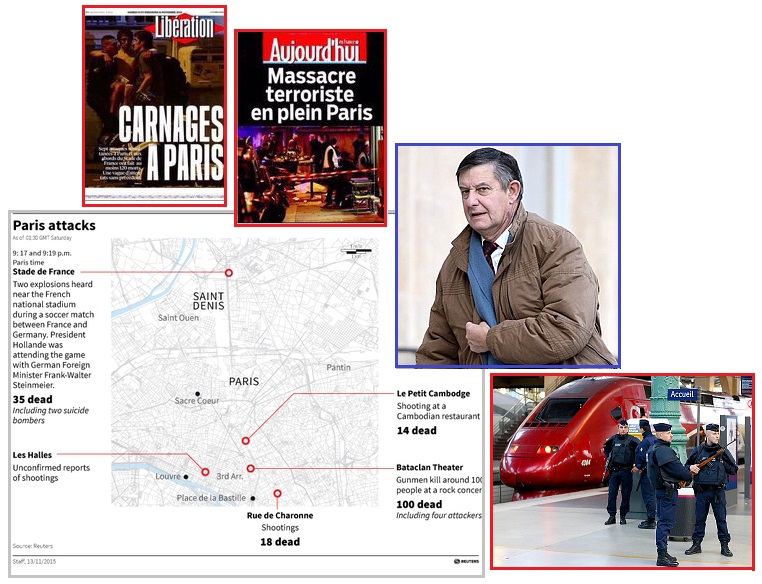 SOZT
Coming the day after Jihadi John was killed in a drone strike, and two days after the Kurds cut a major supply line for ISIS in Iraq, sleeper cells in France were activated. Why was France chosen? Paris is to host a Climate Change conference at the end of November, with Heads of States from many nations attending. Security was being tightened in Paris, in preparation. The Paris slaughter was to make the statement that NO Nation or its leaders would be safe, as long as ISIS was being attacked in the Middle East. Hollande was at the soccer game, an attack site.

We warned after the Charlie Hebdo attack
http://www.zetatalk.com/ning/17ja2015.htm
that “sleeper cells throughout Europe, primarily in France, Germany, and the UK”, would erupt, and that “Europe had stayed too long at the party” hiring immigrants and then pushing them home when the economy slowed. We predicted in September that Europe would tighten their borders
http://zetatalk.com/ning/05sp2015.htm
against the flood of refugees, but this will not save Europe. Only an extremely aggressive campaign to search and destroy all sleeper cells will afford Europe any safety, and this is against their traditional welcoming stance. Europe will resist this, and more bloodshed will result.
EOZT

Prior ZT: http://www.zetatalk.com/ning/17ja2015.htm
In a Europe that is increasingly embracing a Palestinian State, Netanyahu is no longer welcome but is refusing to stay away. Sleeper cells throughout Europe - primarily in France, Germany and the UK – have already been primed and will erupt. The elite may have been wanting to expedite Martial Law, but they wanted it on their terms. They wanted the common man starving and compliant, not militia trained and well-armed terrorists. Europe stayed too long at the party, and it is too late for regrets.

Prior ZT: http://zetatalk.com/ning/05sp2015.htm
Europe has been slow to establish a policy because there simply isn’t a viable solution. A huge percentage of the world is essentially bankrupt, unable to meet the growing demands of their citizens. Governments are running scared, squeezed between economic downturns that refuses to abate and Earth changes they fear will only get worse. When asked to take in refugees, Heads of State quiet shake their heads. There are NO offers. We have predicted that countries will get increasingly strict when faced with a flood of refugees. Those who are already brutal will get increasingly brutal. Just where the push back occurs in Europe is yet to be seen, but it is surely coming.