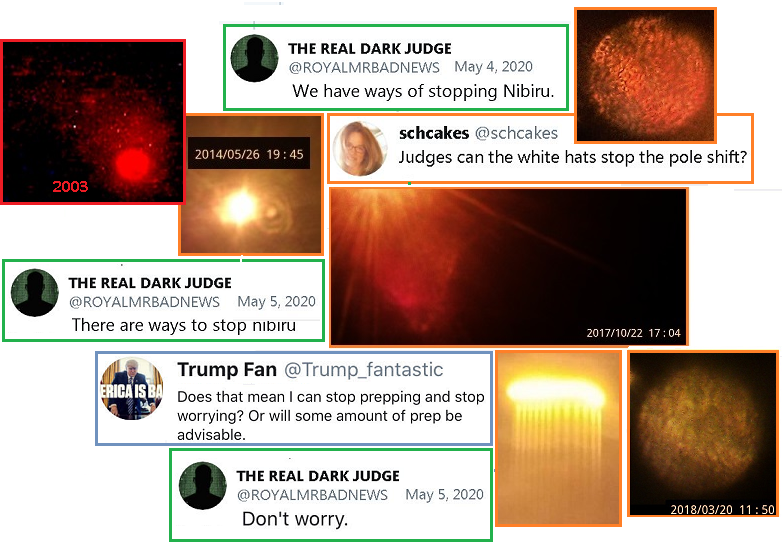 End Times in prophecy, the passage of Nibiru, referenced by the tweet in Q's link? 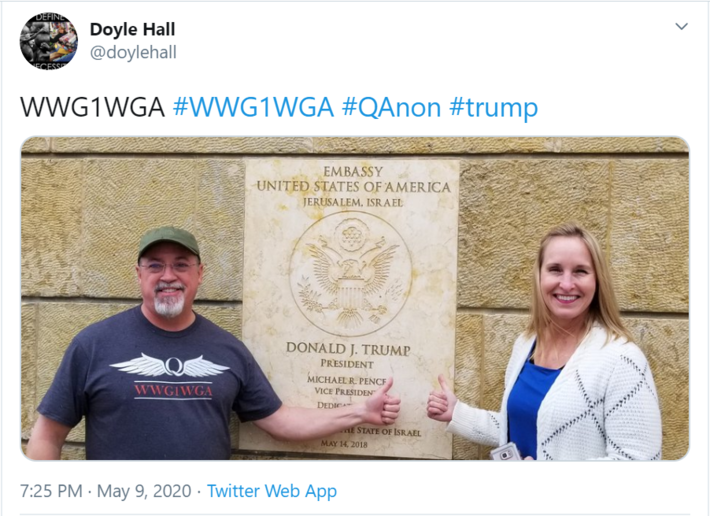 The tweet linked to by Q, in addition to showing a t-shirt with a Q with wings on either side like the ancient Winged Globe symbol of Nibiru, also references prophecies of the passage of Nibiru through where the photo was taken.

The man and woman in the photo pose at the entrance to the U.S embassy in Israel, in front of the dedication plaque commemorating the embassy's official opening in Jerusalem on May 14, 2018.

The relocation of the U.S. embassy to Jerusalem recognizes Jerusalem as the capital of Israel, evoking the End Times told of in prophecy, which correspond to the indefinitely long period of signs and events leading up to and then culminating in the poleshift caused by the passage of Nibiru. 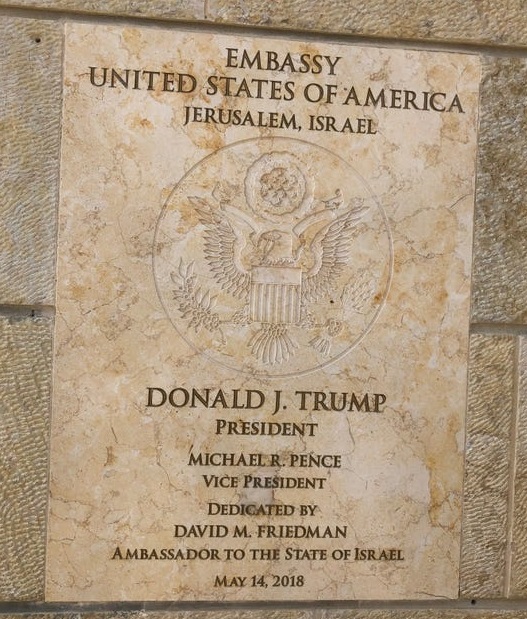 ZetaTalk
"As the Earth changes caused by the approach of Nibiru continue to show up, references to the End Times increasingly are in the press, from fish in the Dead Sea to the greening of the Saudi deserts to Trump moving the US embassy to Jerusalem to David Meade’s constellation lineup to the Mayan Calendar ending in 2012."
http://www.zetatalk.com/ning/30ap2019.htm

"We have alluded to a back door announcement, where so many facts are laid at the feet of the common man that an official announcement is hardly necessary. The Patriarch Kirill made reference in a speech on November 20 that the world was in the End Times, and mentioned the Book of Revelations, as did the David Meade controversy. Now Trump has invoked the End Times, inadvertently. All religions and cultures have holy writ and myths that foretell the End Times. Watch for these to be increasingly referenced in the media."
http://www.zetatalk.com/ning/31de2017.htm

"Religions on the End of the World"
https://www.history.com/topics/religion/religions-on-the-end-of-the...

Winged Globe, symbol of Nibiru, in link posted by Q?

On May 17, 2020, Q posted over a dozen links to tweets by Q supporters in which they declared, WWG1WGA, or Where We Go One, We Go All.

One of these tweets showed the photo above of a man wearing a t-shirt with the design of a letter Q with wings on either side, reminiscent of the Winged Globe, an ancient symbol for Nibiru, including Egyptian and Sumerian, as well as Nibiru's eventual appearance in the sky.

"The ancient symbol of a Winged Globe was assumed by many to be merely a symbol of a traveling planet, Nibiru, but has recently been revealed to be the actual appearance of this approaching monster. ...increasingly, as Planet X approaches the Earth, squeezing Venus toward Earth and closing the gap so that more of the shrouded Planet X complex can be seen, it will take on the appearance of the Winged Globe in the skies."
http://www.zetatalk.com/ning/21ag2010.htm

"Planet X itself has two primary Moon Swirls that flare out on either side, like shoulder pads. This is the source of the Winged Globe shape... These Moon Swirls keep apart from each other, though compete to be the closest Moon Swirl to the body of Planet X itself. Fairly equal in mass, they both cling close to the body of Planet X and both refuse to be displaced, thus the wings."
http://www.zetatalk.com/ning/12ju2010.htm

"Comet in 1486 BC Cause Civilizations Around the World to Worship a Winged Globe"
https://poleshift.ning.com/profiles/blog/show?id=3863141%3ABlogPost...