Same figure as the day before on August 28. Foto info: filter UV-mylar-orange. [and from another] https://en.wikipedia.org/wiki/Magnetic_field The study of magnetic fields began in 1269 when French scholar Petrus Peregrinus de Maricourt mapped out the magnetic field on the surface of a spherical magnet using iron needles. Noting that the resulting field lines crossed at two points he named those points 'poles' in analogy to Earth's poles.  Magnetic field lines are like streamlines in fluid flow, in that they represent something continuous, and a different resolution would show more or fewer lines. Iron filings placed in a magnetic field, form lines that correspond to 'field lines'. 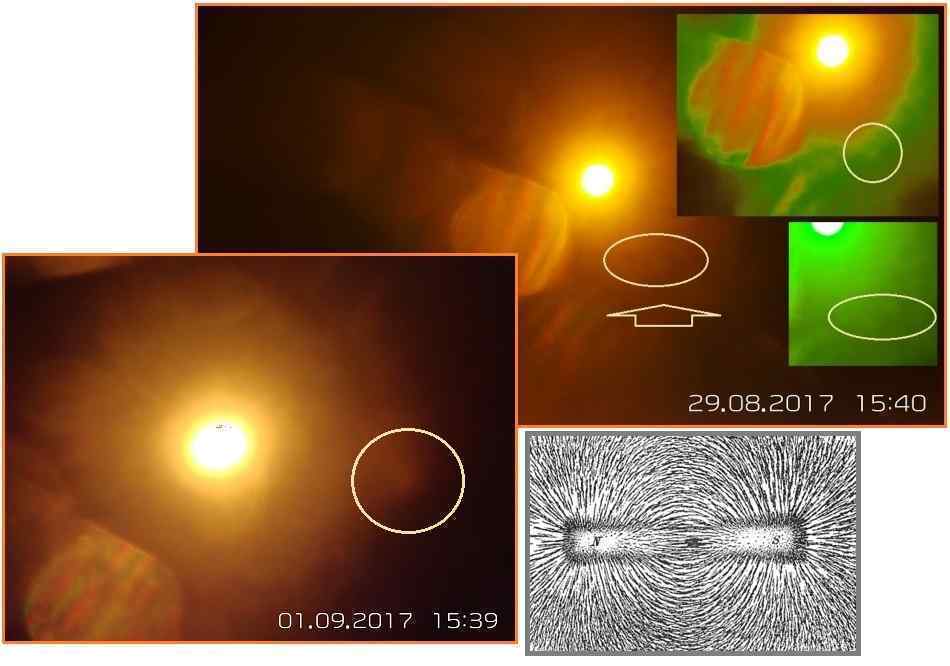 What are the waffle pattern orbs to the left of Nibiru in Alberto’s recent photos? This is where the vast tail of Nibiru wafts, blowing out from the magnetic N Pole of Nibiru and then circling round in a retrograde manner, clockwise, below the Sun and to the left of the Sun. This waffle pattern is new, and does not fit the usual appearance of Moon Swirls. Moon Swirls are seen from the side as a long tube or a String of Pearls, or at the end of the tube as a brilliant focus of light. The new waffle pattern is neither, but it has been generated from the tail.

Much of the tail composition and position has been hidden from mankind due to distance. Unless the ionized red dust in the tail is thick, it only appears as a reddish haze when at a distance. But the dust in the tail is not uniform. There is clumping and congealing around various debris particles, which themselves can become ionized due to longevity in the charged tail. This tendency of debris to adopt a charge would be based on its composition, as the more iron in the debris or Moons, the more likely to adopt a charge.

Thus in addition to the dance of the Moons within Swirls, or the attraction of charged dust in the tail to cling to Nibiru and give it a heavily shrouded appearance, or the attraction that the Moons also have for the charged dust, giving all a fuzzy appearance, we now have yet another characteristic of the Nibiru complex. The waffle is magnetic field lines that have formed around the dominant moon in a Moon Swirl. Just as a magnetic field is identifiable on mankind’s electronic equipment as LINES, due to clumping of the magnetons, the waffle has lines.