Alberto’s latest on May 14 shows an amazing spotlight of light coming straight down from Nibiru and its two dominant Helix Moon Swirls on either side. His photos range from 13:45 to 19:46, over a six hour period, during which the same phenomena appeared. The only change was that the location of Nibiru moved from the 5 o’clock position to the 7 o’clock position, in accordance with the Earth wobble.  Why are we now getting this dramatic spotlight? 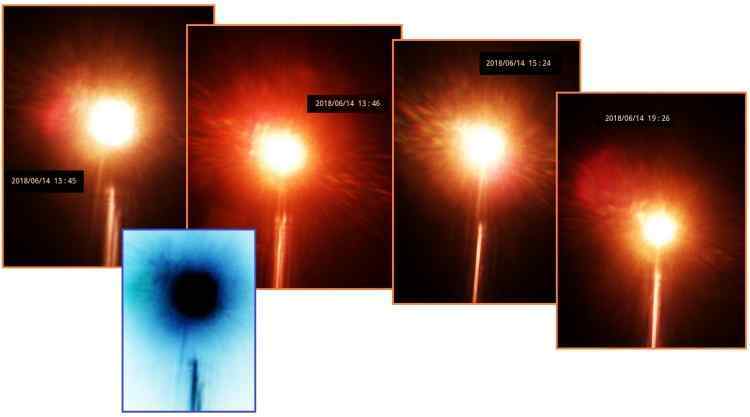 In the past, Nibiru was offset more to the right side of the Sun, when seen from the Northern Hemisphere. It was pointing its magnetic N Pole to the left hand side of the Sun. Thus the vast tail filled with Moon Swirls and debris would be seen blowing under the Sun and then wrapping around in a retrograde circle to the left of the Sun and thence above the Sun. All the components of the Nibiru complex were laid out for relatively easy visibility. But as Nibiru drew closer to the Earth, the Earth was caught more directly in the blast from Nibiru.

Thus recently Alberto’s photos had the appearance of being in a fog bank, a cloud of debris which made it difficult to discern Nibiru or the various components. Sunlight would be expected to flow evenly though this fog, but as light easily bends toward gravity sinks, the sunlight coming close to Nibiru and its dominant moons actually bends toward these gravity sinks. Bent slightly, they refract like light passing through water, to bend and focus the light toward Earth! This phenomena may linger or repeat, coming and going, during the ongoing drama of Nibiru’s approach for a passage.