Things are getting very interesting. I just saw a YouTube showing how the pin pointed area of Nibiru was blocked for a long time, but now it's back again. I went to Google Sky and looked up the coordinates and saw that exact picture of a red ball w/golden wings, but how do I know if it really is Nibiru?
[and from another]
http://beforeitsnews.com/space/2015/06/planet-x-nibiru-now-uncovere...
The Planet X Nibiru System has been covered up for years by a Black box that Google put there to censor it. Not anymore though.
[and from another]
https://youtu.be/poUyvxetHXQ (Note this vid just now removed from YouTube)

[and from another]
https://en.wikipedia.org/wiki/Eridanus_%28constellation%29
Eridanus is a constellation in the southern hemisphere. 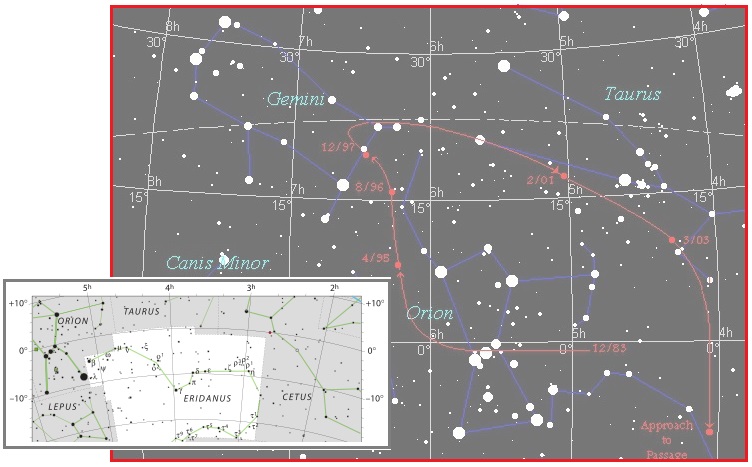 SOZT
Is this Nibiru on the Google Sky images? Yes. This spot had been long covered by a black box in Google Sky as our Path as Viewed from Earth
http://www.zetatalk.com/theword/tword03h.htm
diagram, made public in 1997, showed this is where Nibiru would be found as it approached the Earth. The coordinates, given in RA and Dec for the amateur astronomers peeking at the approaching complex in those days, was also provided in 1997.
http://www.zetatalk.com/theword/tword03m.htm
We showed Nibiru to the right of Orion near the Eridanus Constellation,
https://en.wikipedia.org/wiki/Eridanus_%28constellation%29
which equates to the verbal description we have long given those seeking to see the Nibiru complex as being “at the 4 o’clock position to the Sun when viewed from the Northern Hemisphere”.

Google was directed by the cover-up, in place since the days of Roswell by Reagan’s Executive Order, to block access to this spot, though a leak occurred in 2008. Obama lifted this National Security directive in 2012, and has been attempting to inform the public via an announcement, an issue which has been much covered in ZetaTalk. That Google has stepped ahead to release its black box block could be considered a form of a slow or creeping announcement. There it is! Note that this visibility does not require Google Sky, as a webcam in Italy has been displaying the complex daily, as noted on a Pole Shift ning blog.
http://poleshift.ning.com/profiles/blogs/nibiru-daily-on-webcam
EOZT

Nancy Update: It seems the 2008 Nibiru on Google Sky location, the location of the documented black box, was below the Ecliptic at -6 etc. Where Nibiru should have been. The new flurry is an object at +22, above the ecliptic. Nibiru has not pierced the ecliptic as yet. The +22 object is thus likely to be a real object, showing up on star charts way back when. This was featured in a vid in 2012 and in the lastest flurry with a 2015 vid on BeforItsNews. That vid has now been removed from YouTube. What we know for sure is that the 2008 "leaked" object was the right location, and Google found they had to put a black box there, for years. Google Sky now shows this region without a black box blocking it. Nibiru is likely not there anymore, as this is a MOVING planets.

I note in reading the ZT given, above, that the Zetas were referring to the 2008 OBJECT and never state that the new location, +22 dec, is correct.

All this is on YouTubes - Zeta Report 67 http://youtu.be/-sn85fY8PIk shows the 2008 location and how it lines up with the Zeta path. Zeta Report 68 http://youtu.be/dKkW5XLm6P4 clarifies that the 2008 location is accurate and was a true image of Nibiru, but the later video at +22 Declination is a fraud. Zeta Report 69 https://youtu.be/jq5H6bhFrA0 stressed the 2MASS mapping was done years ago and the 2008 Google Sky image likely captured in the 80's or 90's also the story of tracking by Zeta coordinates in 2001-2003.