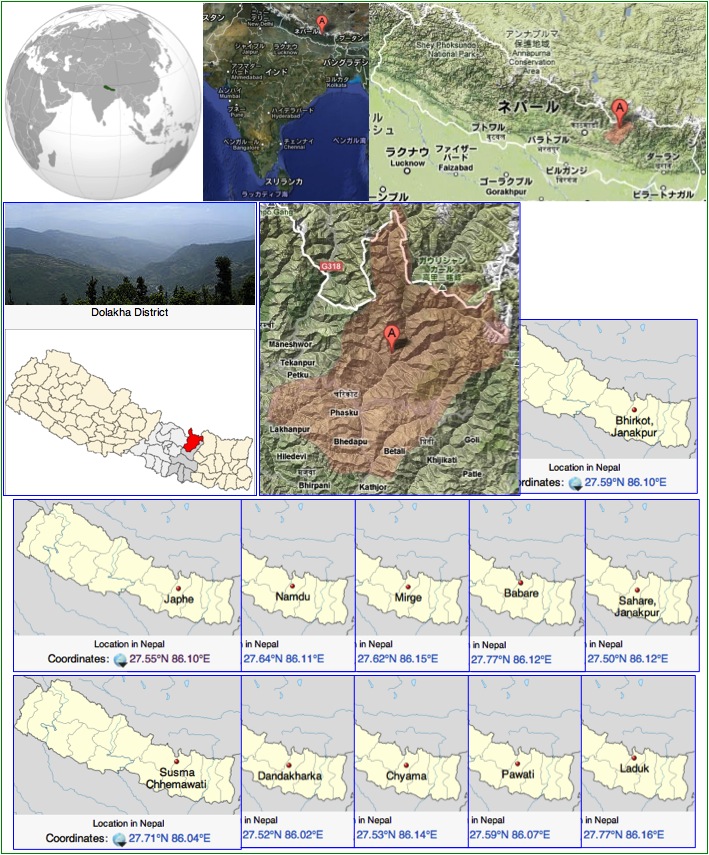 * 112 families displaced by landslide in Dolkha, Nepal [The Himalayan]

DOLKHA: As many as 112 families have been displaced due to landslides that took place in Dolkha district between mid July to mid August this year.

Majority of the displaced families are from Bhirkot VDC. As many as 24 families have been completely displaced while others have been affected partially as a result of landslides.

Similarly, landslides completely displaced six families in Bhimeshwor Municipality and 10 other families have been partially affected.

Harka Bahadur Shrestha, President of NRCS, Dolkha, said the NRCS had distributed clothing, utensils, and tent worth Rs. 6,500 per family as immediate relief to the landslide victims.

The landslide completely displaced 49 families and left partial damages in the houses of 63 families in Dolakha, added Shrestha.

* Nepal: Landslide risk looms large- Most of the houses have develope...; Posted by khan on August 20, 2012 Gautam Gurung, 11, Sarangkot-8, Gothadi in Kaski war buried to death after a landslide struck his house this morning. Gautam’s 40-year-old mother Chija was injured in the incident.
According to Sarangkot VDC Secretary Bishnu Poudel, house owner Surya Bahadur Gurung is out of the country in search of employment and his wife, son and two daughters used to live in the three-room house. Police and locals pulled Gautam’s body out of the rubble. The body was handed over to the family members after conducting a post-mortem in the Western Zonal Regional Hospital, Pokhara, said Spokesman for District Police Office, Kaski, Rabindra Poudel.

In yet another incident, Hem Bahadur Tamang of Chaturale-4, Nuwakot, was killed when a landslide destroyed his house yesterday night.
Tamang was living with his wife Thuli Maya in the house but she was away when the incident happened. Police, assisted by locals, pulled Tamang’s body out of the rubble in the afternoon. 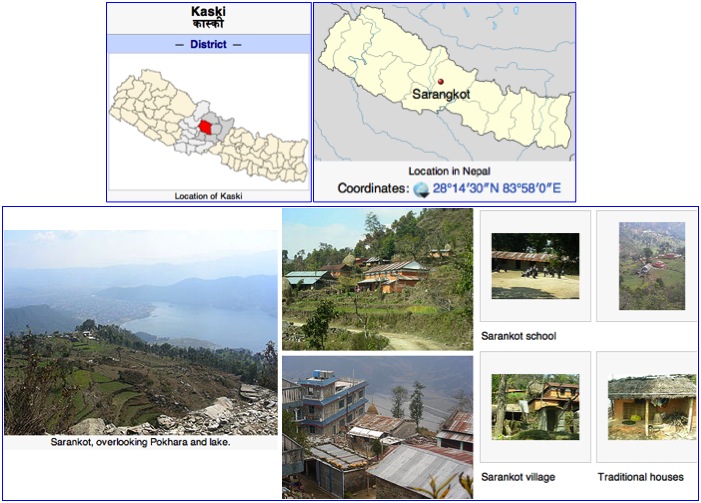 * Sarangkot: Sarankot or Sarangkot is Village Development Committee in Kaski District in the Gandaki Zone of northern-central Nepal. At the time of the 1991 Nepal census it had a population of 5,060 persons residing in 1,010 individual households.

The village is located on a mountainside ridge at an altitude of 1600m with panoramic Himalayan views. From Sarankot, on the northern direction we can see Dhawalagiri in the far west . Annapurna range is visible when the weather is clear on the same side. On the southern direction the village overlooks the city of Pokhara and its lake on the north-western outskirts of the city.

* Chaturale: Chaturali is a village development committee in Nuwakot District in the Bagmati Zone of central Nepal. At the time of the 1991 Nepal census it had a population of 5360 living in 907 individual households.

OKHALDHUNGA: Incessant rains for some days have triggered landslides at the Okhaldhunga district headquarters recently.
Landslides are occurred at different places of the Okhaldhunga bazaar putting the headquarters in peril.
Recently, a landslide swept away the main road linking local Ram bazaar and Ganesh Chowk thereby disrupting the transportation and people's mobility. Some houses, three-story party office of the CPN-UML, and the Bal Mandir Primary School are in immediate need of shift due to the landslide.
School teacher Anand Rajbhandari complained that although the school was put at high risk with landslide, neither the government body nor any stakeholder has shown concern to this peril.
The locals have blamed the administration that it did not heed the disruption of people's mobility and transportation after the landslide.
The landslide near Bal Mandir Primary School has divided the Okhaldhunga bazaar. 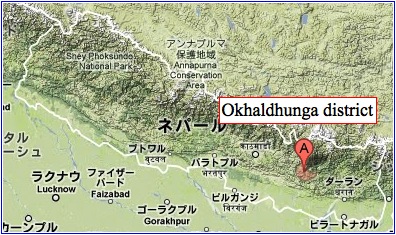 * Okhaldhunga District: Okhaldhunga District(Nepali: ओखलढुङ्गा जिल्ला), a part of Sagarmatha Zone, is one of the seventy-five districts of Nepal, a landlocked country of South Asia. The district, with Okhaldhunga as its district headquarters, covers an area of 1,074.5 km² and has a population (2001) of 156,702.

GAIGHAT: The incessant rains for two days here have disrupted the roads linking to hilly areas.
The 43-km long route Salle road, and Gaighat-Saune-Khanbu stretch of 27 km have been blocked due to landslides occurred at different parts along the stretches, according to local transport entrepreneurs.
Similarly, the roads in Khotang district have been blocked due to landslides at different places of the roads, said Keshar Khakda of Salle Transport Enterprise.
People's mobility is affected in the southern belt of Khotang district after blockades on Sutale-Dhartung road. * Gaighat: Gaighat (गाईघाट ) is a town in east Nepal. It is situated in a valley surrounded by the Chure Hills. Many different ethnic groups and castes live in Gaighat, following their old traditions and speaking many languages. As a trade focal point of the Udayapur District, this place has an emerging number of residents.

* Saune: Saune is a village development committee in Udayapur District in the Sagarmatha Zone of south-eastern Nepal. At the time of the 1991 Nepal census it had a population of 1753 people living in 297 individual households.

* Khanbu: Khanbu is a village development committee in Udayapur District in the Sagarmatha Zone of south-eastern Nepal. At the time of the 1991 Nepal census it had a population of 3271 people living in 557 individual households.

* Khotang District: Khotang District, a part of Sagarmatha Zone, is one of the seventy-five districts of Nepal, a landlocked country of South Asia. The district, with Diktel as its district headquarters, covers an area of 1,591 km² and has a population (2001) of 231,385.

MYAGDI: Teaching and learning has been affected when landslide dismantled a building of Okhale Primary School in Patlekhet VDC of Myagdi.
The landslide has completely demolished two of eight classrooms of the school, leaving the curricular activities in high and dry, said Hom KC, a local.
We are compelled to continue classes in the building at risk of collapse due to inadequate rooms in the school, said School Principal Bhagawati Sharma.
It is noted that the landslide occurred in the second week of August at a time when students were inside classroom had broken 20 benches in the school.
There is no condition to smoothly run the classes until re-construction of the school building, which has been in decrepit condition, said KC. 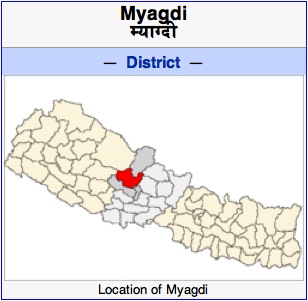 Patlekhet: Patlekhet is a village development committee in Myagdi District in the Dhawalagiri Zone of western-central Nepal. At the time of the 1991 Nepal census it had a population of 1697 people living in 345 individual households.

KATHMANDU: Four consecutive earthquakes -- two of them powerful ones -- rocked western Nepal in past 12 hours.

With their epicentres in the border area of Rolpa and Rukum districts, the tremors of the first quake were felt in Kathmandu at 10:15 pm last night.

Its magnitude was 5.6 on the Richter Scale, according to Dilli Ram Tiwari, survey officer at National Seismological Centre (NSC) in Kathmandu.