I was wondering if the Zeta care to comment on the recent suicide deaths of celebrities like designer Kate Spade, Dutch Queen’s sister, and most recent Anthony Bourdain whose shows I really enjoyed.  All ruled suicides.  Kate Spade is linked and has worked with Clinton Foundation in Haiti, Queen’s sister linked to the Rothschild, and now with Anthony’s show linking him with CNN and his relationship to Elon Musk and his current girlfriend was molested by Harvey Weinstein.  [and from another] https://youtu.be/dAR0O8QXgkA [and from another] http://www.neonnettle.com/news/4269-anthony-bourdain-was-about-to-e... Anthony Bourdain Was About to Expose an Elite Pedophile Ring Before He Died. Journalist wanted to investigate Atlanta child trafficking network. Bourdain was an open critic of Harvey Weinstein and made no secret of his desire for the disgraced former Hollywood mogul to face justice. During his criticisms of Weinstein, he openly stated that Hillary Clinton had full knowledge of the sexual abuse. Bourdain’s girlfriend, actress Asia Argento, is one of the victims who accused Weinstein of raping her. Just over a month ago, Mr. Bourdain revealed that he had been threatened by Clinton's representatives. Just this week, famous designer and Clinton Foundation member, Kate Spade reportedly killed herself. According to Spade's family, she had also been threatened for speaking out. More recently, following news of a major child trafficking bust, sources are stating that Bourdain was planning on running "an exposé" on  the sex slave network. Despite reports that 160 children were rescued and almost 150 arrested during the raids, Mr. Bourdain's network, CNN, has refused to cover the case. [and from another] https://t.co/3dHuOS05nF [and from another] Andy Spade Dons Mouse Mask as He's Spotted for First Time Since Wife's Death  June 7, 2018 https://www.insideedition.com/kate-spade-dead-55-andy-spade-dons-mo... The grieving husband of fashion designer Kate Spade was spotted leaving his Manhattan apartment building while wearing a bizarre disguise. [and from another] Kate Spade Found Dead, Clinton Foundation Worked With Designer in Haiti  June 6, 2018 https://steemit.com/conspiracy/@realityreader/kate-spade-found-dead... Spade had partnered with the Clinton Foundation on at least two major projects. The designer had helped operate a media campaign for The Clinton Foundation's No Ceiling Initiative. Kate Spade also worked with the Clinton's in Haiti, sending representatives to deal with Haitian business owners on Clinton's behalf. A Clinton foundation report from 2016 reads, "The Clinton Foundation Haiti initiative works to encourage economic growth, support small businesses, and empower girls and women in Haiti.”  [and from another] https://t.co/pe6WNBW3Sa [and from another] http://www.dailymail.co.uk/news/article-5823371/Queen-Maxima-Argent... Holland's Queen Maxima, her husband and three children lay her 33-year-old sister to rest at emotional funeral, after tragic hanging suicide. June 9, 2018. Ines Zorreguieta, 33, who reportedly had been battling depression and other mental issues, was found dead by a friend in her apartment in the Almagro district of Buenos Aires. [and from another] http://www.dailymail.co.uk/news/article-5816311/Queen-Maxima-Hollan... The younger sister of Queen Maxima of Holland has been found hanged at her home in Argentina. Inés Zorreguieta, 33, was found dead at her apartment in Buenos Aires. Inés was the youngest of government minister Jorge Zorreguieta. The news sparked controversy in Holland as her father's tenure as a minister was during the early stages of the Dirty War in Argentina - a period of state terrorism that saw up to 30,000 people killed or go missing during a seven-year military regime. [and from another] Queen Beatrix attend Premiere Life and Death of Marina Abramovic in Carre http://www.dutchphotopress.com/event/1050-queen-beatrix-attend-prem... 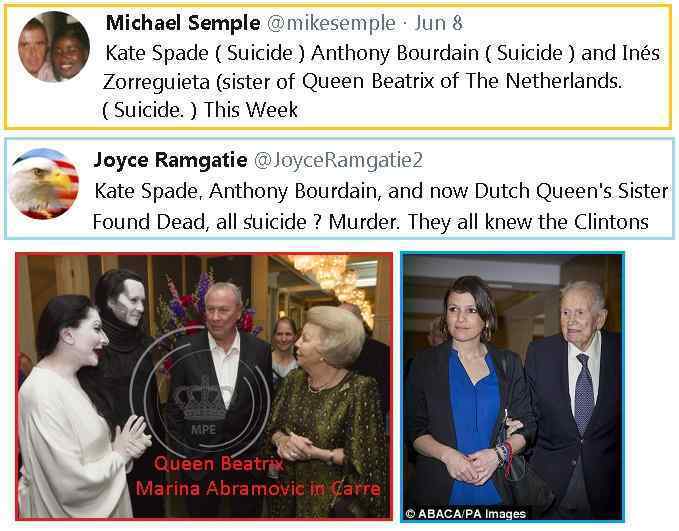 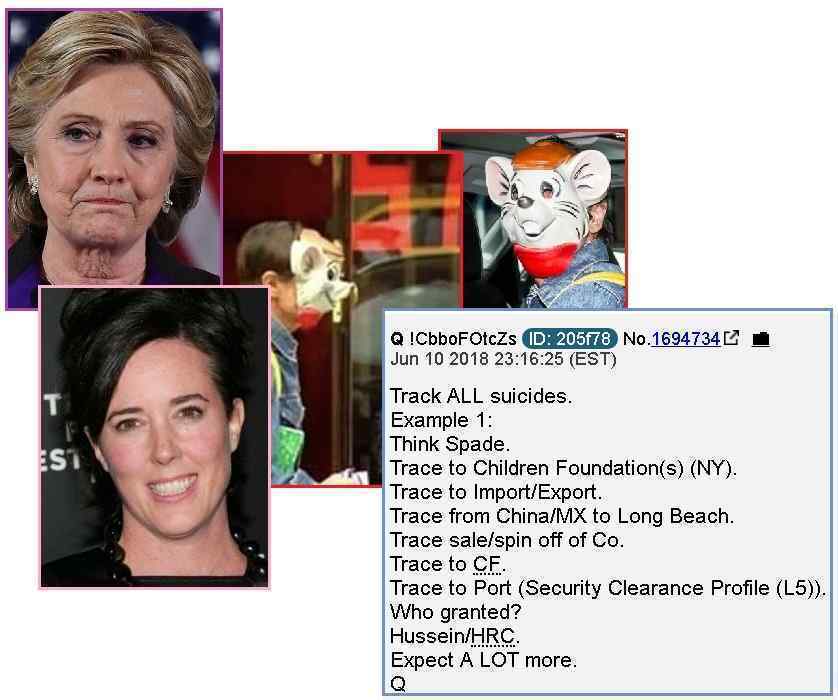 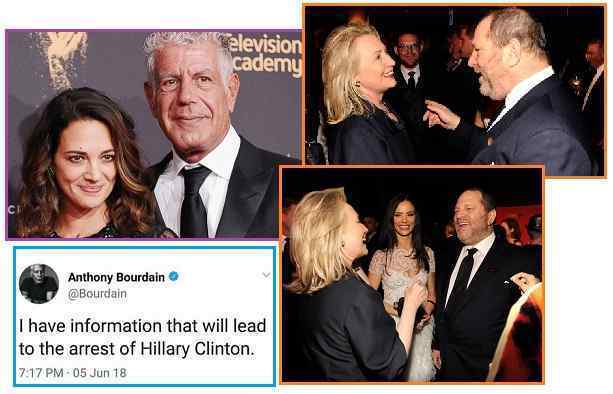 In the prime of life, in good health, with successful careers and well loved by all who knew them, three  people apparently decided to hang themselves, all within the same week. At least two of them were found in the same ritual manner, by a rope tied to a door knob and lobbed over the top of the door. What was the common connection? Kate Spade worked with the Clinton Foundation in Haiti, where many orphaned children went missing. Anthony Bourdain was married to a woman who had accused Weinstein of rape, and of course Weinstein was close friends with Hillary Clinton.

They were murdered to silence them, as the investigations into ritual child sacrifice by the elite were reaching closer to those of wealth and influence at the top. Those in the know, who were themselves not participants, are vulnerable, especially if they have specifics to provide to the investigators. A clue to Kate Spade’s death is the rat’s mask boldly worn by her husband on the streets after her death, a mask with a red scarf around the throat. He is saying she was killed as she would ‘rat out’ on the Clintons.

What of the Dutch Queen Maxima’s sister in Argentina? She had been in attendance to her aging father before he died, and as those approaching death are prone to confess their sins, she learned the truth about what had happened to many Argentine children who went missing. It is presumed by many that they were adopted, but most were sold to the wealthy who worshiped Moloch. The details of the modern day network, particularly among the royalty in Europe, were whispered into the ear of young Ines, who was likewise silenced.