Could the Zetas comment on these negative trends. Elite is gaining strength before falling. They introduce censorship on the Internet, cash ban is already being pushed in many countries, Media become more consolidated, defense spending is growing amid economic problems, economic and climate data are manipulated. That list could be even longer. The control is greatly increased. This affected ZetaTalk and Pole Shift ning. [and from another] https://www.wsws.org/en/articles/2017/07/31/goog-j31.htmlGoogle’s chief search engineer legitimizes new censorship algorithm. July 31, 2017. Between April and June, Google completed a major revision of its search engine that sharply curtails public access to Internet web sites that operate independently of the corporate and state-controlled media. Since the implementation of the changes, many left wing, anti-war and progressive web sites have experienced a sharp fall in traffic generated by Google searches. The World Socialist Web Site has seen, within just one month, a 70 percent drop in traffic from Google. Google has recruited some 10,000 “evaluators” to judge the “quality” of various web domains. What this means, concretely, is that Google decides not only what political views it wants censored, but also what sites are to be favored. [and from another] https://www.reuters.com/article/swiss-snb-stocks/swiss-central-bank... Swiss central bank steps up stock buying spree. August 30, 2016. Switzerland’s central bank now owns more publicly-traded shares in Facebook than Mark Zuckerberg, part of a mushrooming stock portfolio that is likely to grow yet further. [and from another] https://www.alexa.com/siteinfo/zetatalk.com [and from another] https://www.alexa.com/siteinfo/poleshift.ning.com [and from another] http://www.businessinsider.com/these-6-corporations-control-90-of-t... These 6 Corporations Control 90% Of The Media In America. June 14, 2012. That's consolidated from 50 companies back in 1983. [and from another] Singer's Elliott Says Optimism on U.S. Growth Unwarranted. November 4, 2014. https://www.bloomberg.com/news/articles/2014-11-04/singer-s-elliott... Optimism on U.S. growth is misguided as economic data understate inflation and overstate growth, and central bank policies of the past six years aren’t sustainable. [and from another] Bombshell study: Temperature Adjustments Account for 'Nearly All of the Warming' In Government Climate Data. July 6, 2017. https://wattsupwiththat.com/2017/07/06/bombshell-study-temperature-... In fact, almost all the surface temperature warming adjustments cool past temperatures and warm more current records, increasing the warming trend. 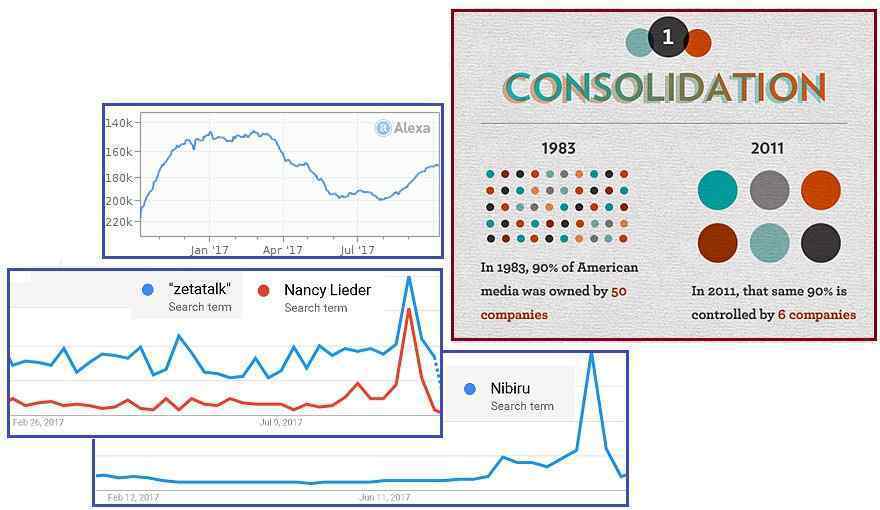 It is well known that dictatorships control the perceptions of the public by controlling the media. There is the state owned media outlet and then there are others who are nervous guests and tread carefully. Journalists in combat are killed, supposedly by accident, if they do not report what the field commanders wish the public to hear. Politics is rift with lies, rarely exposed, with politicians bought by the wealthy to do their bidding. And this battle for truth is an ongoing battle even in those countries which declare themselves the premier democracies on planet Earth.

The truth is the enemy of those who would control the world, continue their control in the face of a truth that would ruin this grip. We have spoken continuously about the cover-up over the pending passage of Nibiru, as this threatens the control of those who perceive themselves as running the world. The banking industry would certainly be damaged by the truth. Debt slavery of the working classes would be halted, debts unpaid, mortgages unpaid, replaced by the barter system. Corporate control would be the second victim, as the public realized they did not need the products or services advertised.

If money becomes worthless, then the elite are reduced to the level of the common man, and this is unthinkable to the elite. The stakes are high during the cover-up over Nibiru, and as the truth is threatening to explode due to visibility of the Nibiru complex in the skies and the violence of the daily Earth wobble. The elite are frantic to erect defenses. Their dilemma is that to deny Nibiru would increasingly be self-defeating, as they would lose credibility with the common man. As we have stated, the Internet will never be controlled, as it was built to withstand blockages.

What to do, then, to control perceptions? We stated when the David Meade theory about the September 23, constellation lineup emerged earlier in 2017 that this was designed to discredit the Nibiru theories, but this failed as it only connected the public to ZetaTalk where the truth lay. This was in great part due to the Junta which has run the US since the last years of Obama, as it has forced Google to ensure that the Wiki article featuring Nancy and ZetaTalk be up top in any search. The major media in the West tries to present a diverse face, but is absolutely restricting news, but the truth has many friends, such as Russia, to counteract these maneuvers. In the end, tight media control will explode, like a dam breaking under the weight of water, with truth running in all directions. Media moguls will create the future they fear, thus.

Cameron, I think the sites themselves are the TARGET, and those who READ or pass through with a comment, etc are considered small fry. PS ning gets 38,000+ unique readers every week. ZetaTalk website more than that, 1.5 million hits. If they want to stop the message, they will try to influence those in charge of ZT or PS ning, not swat at the readership. Not to worry, thus.

Comment by Cameron W Coates on October 11, 2017 at 11:10am
This leads to the question, if the elite want to suppress the traffic to sites such as poleshift and Zetatalk, Are they interested in the patterns of who frequents the sites?