What was the motive behind this cyberattack on the Mauna Kea telescope observatory? [and from another] https://www.ifa.hawaii.edu/mko/ The summit of Mauna Kea on the Island of Hawaii hosts the world's largest astronomical observatory, with telescopes operated by astronomers from eleven countries. The combined light-gathering power of the telescopes on Mauna Kea is fifteen times greater than that of the Palomar telescope in California -- for many years the world's largest -- and sixty times greater than that of the Hubble Space Telescope. Mauna Kea is unique as an astronomical observing site. The atmosphere above the mountain is extremely dry -- which is important in measuring infrared and submillimeter radiation from celestial sources - and cloud-free, so that the proportion of clear nights is among the highest in the world. The exceptional stability of the atmosphere above Mauna Kea permits more detailed studies than are possible elsewhere, while its distance from city lights and a strong island-wide lighting ordinance ensure an extremely dark sky, allowing observation of the faintest galaxies that lie at the very edge of the observable Universe. [and from another] http://clapway.com/2015/04/26/hawaiians-protest-new-mauna-kea-teles... Native Hawaiians are protesting the new Mauna Kea telescope, the Thirty-Meter Telescope. The Mauna Kea telescope project has caused the protesters to travel to the area to dispute its creation due to the sacredness of the Mauna Kea or Mauna O Wakea Mountain. Mauna Kea is considered by the natives as the most sacred place in the entire Hawaiian archipelago because of the belief that several Hawaiian gods live on its peak. [and from another] http://www.popsci.com/contentious-mauna-kea-telescope-website-downe... It appears the stars have not yet aligned for the Thirty Meter Telescope project, which saw its main website targeted by an alleged cyberattack this weekend. The site was unavailable for several hours, a project spokesperson confirmed, and a group known as Operation Green Rights--associated with the popular Anonymous movement--has claimed responsibility. Despite approval from the state's Board of Land and Natural Resources in 2013, the TMT project has run into opposition since the site was first selected in 2009. Objections come from both native Hawaiians, to whom Mauna Kea is a sacred site, and environmental advocates, as they believe the telescope's construction will interfere with Mauna Kea's glacial ecosystem and perhaps put native species at risk. 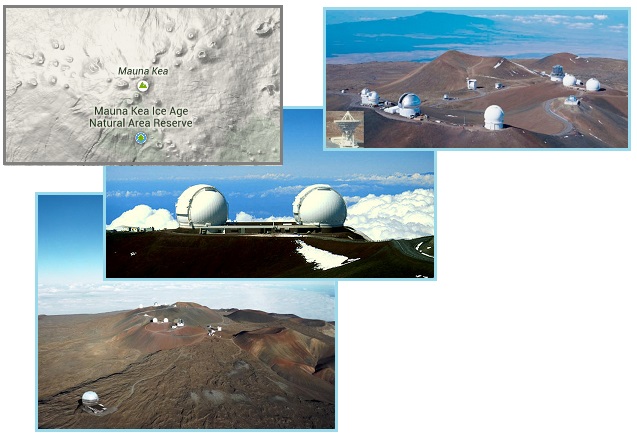 Where on the surface this cyberattack looks like support for the long-running complaints by native Hawaiians about their sacred mountain top – Mauna Kea – being used for observatories, this is not the basis for the cyberattack. Mauna Kea supports the largest telescopes on the face of the Earth, with great clarity as the atmosphere above the clouds there is clear and dry and free of pollution. Larger and larger observatories have thus been placed there, and as Nibiru draws close peering out into sky for infra-red captures has become increasingly important. Nibiru and its dominant Moon Swirls can be distinctly outlined in infra-red.

Less than a month ago we were asked to comment on the Executive Order Obama wrote declaring cyber-security a potential National Emergency. Our explanation was that Obama is anticipating the cover-up crowd shifting to blocking the media or other information sources after they lose the battle to block the announcement. Yes, Nibiru is approaching for a passage, but only the cover-up crowd will tell you what this means. No ZetaTalk prophecy. No honest information on how close it is coming from any observatory. Lies of every kind on what is causing the Earth changes. The cover-up, in essence, will continue, or so they hope.

Images from Mauna Kea are anticipated to be highly sought after, as outside of images from the ISS or from probes sent aloft to peek at the approaching Nibiru, these will have the greatest clarity of any observatory on Earth. The cyberattack was a warning from the elite wanting the cover-up over the approach of Nibiru to continue, in whatever fashion. Will this type of intimidation succeed? Hardly. Obama has already gone on record stating that this type of activity will be treated as a crime, of the highest order. In that a front operation is being used, it is the behind the scenes prosecution by black ops that will address these crimes. The people have a right to know. This is Obama’s attitude.