Los Vegas is the glitter capitol of the US, where gambling and live entertainment make this a favorite tourist destination. Even if one loses the funds they came with, they can leave with a smile as they have been entertained, or so the management hopes. Certainly, even during this the second Great Depression, they have not been at a loss for traffic, and the boom times continue at Los Vegas. We have stated that due to the hard rock from prior salt lakes in much of Nevada that the Pole Shift is not expected to change the geography of the area. So what would put Los Vegas at risk that a UFO display that could be seen from the brightly lit streets of Los Vegas recently occurred?

The great Hoover Dam is nearby, but when this breaks after the New Madrid adjustment it is assumed that it will be land down river that will be in danger. Dams do not always break by shattering such that the waters they hold back pour around the shattered dam. The Hoover Dam in particular was built so sturdily that it is unlikely to shatter. This was because it was intended to hold back an immense amount of water, and the site chosen because the rock on either side of the dam was considered impervious to erosion or crumbling. What then is likely to happen to the Hoover Dam as the pressure of the N American bow increases, as it surely will prior to the New Madrid adjustment?

Spillways are openings in the dams, tubes that run through the dams ending in gates, all of which are vulnerable to being crunched and broken. A jammed gateway will hardly be unjammed easily, as that would entail dismantling the dam or some such maneuver. Jammed shut, what would the water flowing into the lake above the Hoover Dam do? It would rise, and flow into Los Vegas along the ravines that connect the two. Flood may be the last thing that residents of Los Vegas worry about, but flood may be something that may arrive suddenly, and fail to drain.

I lived in Las Vegas from 2007-2010, and have followed ZT since around 2004-5.  So of course, I've read the "Safe Locs" for the region.  There is no mention of Las Vegas itself.  I thought it was a little odd at first, since Las Vegas has a population around 2 million, and they did mention Reno, which is considerably smaller.  Here is the link to the comments for Nevada .

So what is the fate of Las Vegas?  It seems as though it may become virtually unihabitable, even before the Pole Shift.  Consider that Las Vegas gets 90% of its water from Lake Mead, which is of course the Lake formed from the Hoover Dam blocking off the Colorado River.  There is already alarm at how quickly the Lake is draining, as the Las Vegas valley suffers through drought.  So what happens when "7 of 10" adjustments occur along the New Madrid fault line?

ZT: "When the New Madrid adjusts, Mexico will be too far to the West for the current comfort of the West Coast, which will bow in the Southern California and Arizona region. The fault line that runs along Mexico's West coast runs just under the Arizona border, then on up along the West Coast of California. Before the West Coast of the US starts adjusting to the new position of Mexico, with slip-slide adjustments, there will be a bending of the Arizona desert area that will fracture the dry soil, create a breach in the great Colorado River dam, and allow magma to rise in the calderas in the US - Mammoth Lake in California and Yellowstone. If the Hoover dam breaks, whither the city of Phoenix, which lies on flat land and near farm land irrigated by the waters of the Colorado?"

In addition to the prospect of no water, what else might Las Vegas experience?  Keep in mind the fault line running North from San Diego to the Mammoth Lake caldera region:

ZetaTalk Comment 9/9/2006: We have chimed in with Scallion on suspecting that a rip will occur from San Diego up toward Yellowstone, as there is a fault line there. Why would this rip, in a manner that would disrupt Mammoth? As we have stated in detailing the Earth Torque, wherein New England is pulled toward the East and Mexico toward the West, pulling the N American continent in a diagonal, fault lines will not be stressed in their traditional ways, but in new ways, during the coming months. New Madrid is an example. East of the Mississippi, going up, West of the Mississippi, going down. In a similar manner, the fault line from San Diego to Mammoth, and on up toward Yellowstone, will find the land South going West, with Mexido, and North staying with the land above this fault. Thus, should such rupture take place, in stages, evacuate Mammoth Lake!

The original ZetaTalk prediction on this rupture places it in the timeline "some months" before the pole shift, a clue of sorts to a timeline when this rupture occurs.

ZetaTalk Prediction 2/15/2000: Of course all volcanoes will explode, as this is going to be a very severe pole shift. What about the months and years preceding the pole shift? It is no secret that Mammoth Lake and the caldera of Yellowstone are warming up, and the populace has been prepared for these occurrences by the movie Volcano where there, in the middle of LA, lava is bubbling up. In fact, there is a fault line running from the approximate San Diego/LA area, up into the Sierras, and this is liable to rupture rather violently during one of the quakes that precedes the pole shift by some months. Volcanic eruptions from that area in the Sierras can be expected.

Looking closely at a map of the area, it can be seen that there is a rift running from San Diego directly north to the Mammoth Lake area. This confirms what the Zetas have said about a hidden fault line. 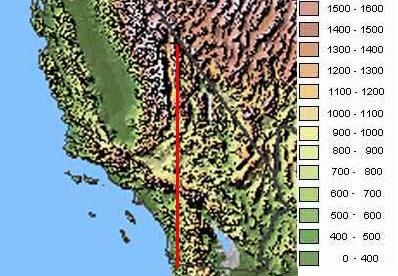 ZetaTalk Explanation 10/6/2007: We have repeatedly warned that the US southwest was going to undergo a bowing stress, a situation that would last until the N American continent adjusted by a diagonal rip along the extended New Madrid Fault line, which includes fracturing from New England through the Midwest and down into Mexico. Until that adjustment occurs, Mexico is tugged to the west, causing a bow to form along the West Coast. The bow causes compression at its center, at the San Andreas Fault line near San Diego, and expansion inland. This bow is what caused the Utah mine collapse, as we explained at the time. Indirectly, this bow is what caused the Minneapolis bridge collapse, as it forces the St. Lawrence Seaway to open, causing adjustments all the way to the Black Hills of S. Dakota.

San Diego is lowlands, as the nearby presence of the Salton Sea shows. This area will compress more than land to the north, as the rock is now less thick as it has proved to be pliable in the past, and distended. San Diego is thus due for a grinding action, a tumbling action, as the bow comes under increasing stress. When the New Madrid Fault line adjusts, the stress on this bow will relax but another nightmare will emerge - new adjustments along the San Andreas Fault line. Now the western half of the N American continent is free to jut to the west, at a diagonal, so slip-slide all along the San Andreas Fault line will occur for some time. We have mentioned that a rip will occur from San Diego up through Mammoth Lake of California and on up toward Yellowstone at some point. As one can see from a topographical map, there is a rift along this path, where ripping has occurred before. This too is awaiting the San Diego area, which will by that time be an almost unlivable area.

As you can see on the map, that fault line is directly West of Las Vegas (a bit north of where CA, AZ, and NV meet).  What happens when those volcanoes erupt?  The ash and smoke will blow into the Las Vegas valley, where they have issues with dissipating smog, due to being stuck between two mountain ranges.  So add toxic air to a lack of water.

Secondary to these things, is the weakened economy there.  They have been hit hard by the recent economic downturn, with one of the highest unemployment rates in the US (13.7% ), and led the nation in foreclosure rates as well in_2010.  The city runs on the success of the tourism industry, which has been slumping, and is still sluggish.

I also imagine the quake(s) that will be strong enough to break the land to one side of the Hoover Dam will also take some toll on the city structures.

I see all these things pointing to a mass exodus from the Las Vegas valley in the near future.  People will simply leave it behind.  Empty.

nice, i remember reading that post now Kris, thanks for posting the link on the ufo page. i  will post the link for the video here as well.

Comment by Kris H on April 7, 2012 at 7:20pm
Great point @Chris Miller! No water flowing through the dam means no power being generated. So add that to the misery residents will face as well. I may even add that point to the body of this blog later. Thanks!

Comment by Kris H on April 7, 2012 at 5:32pm
I still have some friends in Vegas. A few I was able to discuss PX with, but did not with others. I hope they will be able to escape when things start to unravel there.

Of all the various things that could happen to Vegas, I did not think flooding would be one of them.

Thanks Kris H for the fascinating video. This should be called "UFO Swarm", I believe. Comment by Muzz on April 7, 2012 at 10:21am
@Kris H, my take on the Zetatalk was that perhaps the doors could quite possibly jam shut, this would turn Sin city into Swamp city.
@ Andrew French, Yes it seems there are many more signs now, my personal feeling is that people are waking up slowly.

"The original ZetaTalk prediction on this rupture places it in the timeline "some months" before the pole shift, a clue of sorts to a timeline when this rupture occurs."  Unfortunately, "some months" is pretty vague, probably  by necessity.  The power and wealthy elites desperately need a date for the pole shift and the Zetas aren't going to give them any dates or timeline clues or aid/assistance.

Comment by Kris H on April 23, 2011 at 6:26am
Also, it could be a real mess if the EQs that break the dam and lose the water also ruin the roads out of town.

Comment by JP on April 23, 2011 at 6:14am
Nice work. Events are starting to heat up around south Cali and every bit of info will help in the prep of change.  I can't hardly imagine Las Vegas in a blackout after the earthquakes take out the energy. That place would need lots of backup generators for sure.

Comment by Howard on April 23, 2011 at 5:31am
Thank you, Kris!  That is an excellent summary of what the southwestern U.S. can expect in the near future.