I am sure that I am one of many mentioning this and asking about the accelerations that are taking place regards tectonic plate movements with resulting quakes, volcanic eruptions and tsunamis. The Bermuda Triangle volcano Kick 'em Jenny has been placed on orange alert (red is highest), meaning there are highly elevated levels of seismic and/or venting activity and eruption may begin with less than twenty-four hours' notice. Its summit is ±190m (600ft) below the surface. Since July 11 more than 200 micro and small earthquakes of varying magnitudes have been recorded while today a strong continuous signal was observed on instruments. Eruptions may begin with less than 24hr notice, with tsunami threat. No tsunami alert has been issued yet. A 5 kilometer (3 mile) exclusion zone has also been set up for boat traffic around the volcano. Grenada, St. Vincent, Barbados and Trinidad have been placed on alert. Evacuation routes and transport on standby mainly because of change to water density, that could make boats sink. However, before this awakening volcanic activity there was a mag 6.5 quake 131 NE of Barbados with a swarm of nearly 50 quakes in less than 24 hrs which prompted the National Emergency Council to meet with a team from the University of the West Indies seismic unit. While you/Zetas have always mentioned these zones, it seems that there has been an acceleration, as was predicted to start towards the end of 2015. It seems we have entered the 7-10 scenarios. Though much has been said about this, the timing was left vague, maybe more can be said now? [and from another]http://www.wired.com/2015/07/theres-volcano-called-kick-em-jenny-angry  July 24, 2015 A submarine volcano near the coast of Grenada in the West Indies (Lesser Antilles) looks like it might be headed towards a new eruption.  [and from another] http://www.uwiseismic.com/General.aspx?id=53  [and from another] http://www.thebigwobble.org/2015/07/kick-em-jenny-volcano-tsunami-t...  Kick 'em Jenny Volcano Tsunami Threat: Grenada, St. Vincent, Barbados and Trinidad have been placed on alert! Evacuation routes and transport on standby.  July 24, 2015. Kick 'em Jenny is an active submarine volcano or seamount on the Caribbean Sea floor, located 8 km (5 mi) north of the island of Grenada and about 8 km (5 mi) west of Ronde Island in the Grenadines at roughly 12.30° N, 61.64° W. Its summit is approximately 200 m (600 ft) below the surface of the ocean. [and from another]http://www.thebigwobble.org/2015/07/was-magnitude-65-quake-responsi...  Signs of elevated seismicity (earthquakes) began on 11th July and continue to present. 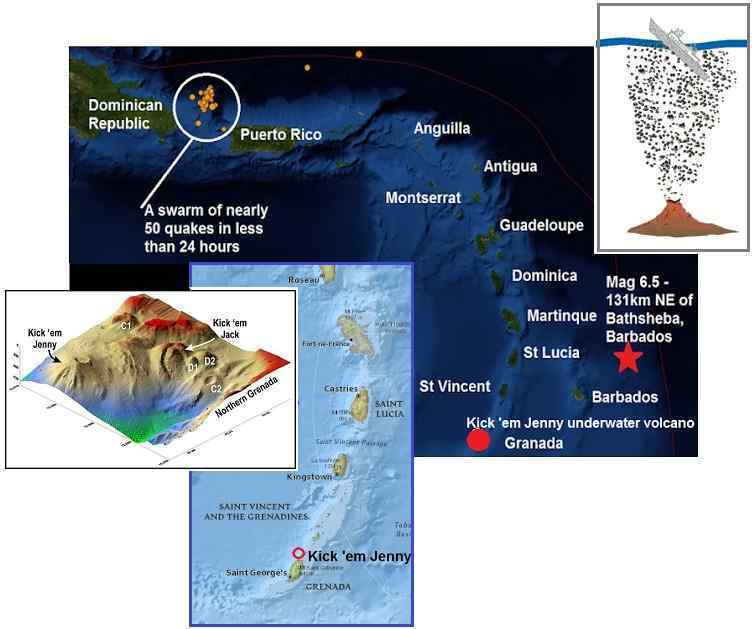 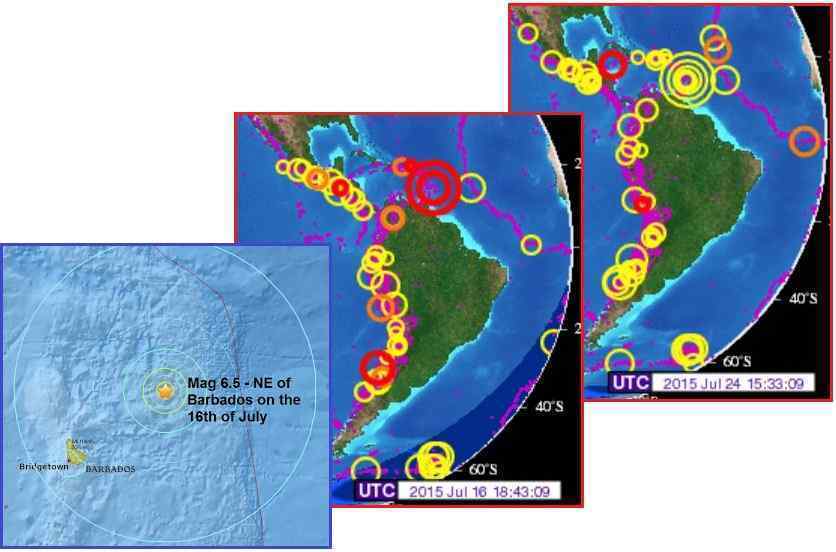 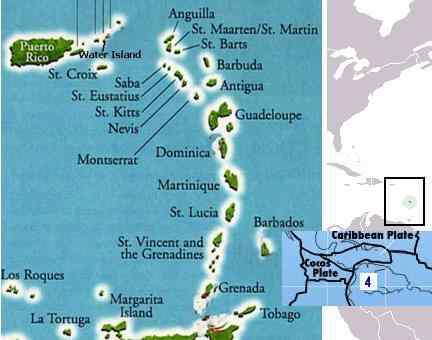 The pace of the 7 of 10 plate movements has indeed picked up, most dramatically in the S American roll. The entire spectrum of the 7 of 10 plate movement, predicted by ourselves to begin at the end of 2010 with sinking in the Sunda Plate region, was slowed by the Council of Worlds. The Sunda Plate sinking we predicted did start on time, but is only about 95% completed. Tilting of the Philippine and Mariana Plates likewise is incomplete, at about 72% and 78% respectively. The S American roll has been sleepy, but over this past month has been notable with quakes along the Andes and in particular where the Caribbean Plate is pushing Central America westward and along the eastern edge of the Caribbean Plate.

Jamaica has sea water rushing inland on July 8, Trinidad has registered a rip through its center along the plate border, and now Kick’em Jenny has shown the accuracy of our predictions re Caribbean volcanoes by becoming active, just a week after the eastern edge of the Caribbean Plate showed it was rupturing. The volcano and 6.5 quake were separate occurrences, showing that one did not incite the other but that the S American roll was responsible for both occurrences. What is in store for the Caribbean?   The completion of our 7 of 10 predictions.  Just what the time frame will be, we cannot say.