During a press conference to announce the opening of a new airport, the Iraqi Transport Minister mentioned the space-faring culture of the ancient Sumerians, the work of Zecharia Sitchin, the 12th Planet named Nibiru and its 3,600 year orbit. Was this another Prong 3 assist in anticipation of the discovery of Nibiru in the inner solar system? [and from another] Iraqi Transport Minister Kazem Finjan: 5,000-Year-Old Sumerian Airport Served for Space Travel http://www.youtube.com/watch?v=lK8yr3h_U4Y During a visit to the Dhi Qar Governorate, Iraqi Transport Minister Kazem Finjan said that Dhi Qar was the venue of the first ever airport, built 5,000 years ago by the Sumerians. Speaking at a news conference, Minister Finjan said that the Sumerian airport was used for space travel and helped the Sumerians discover the planet Nibiru. [and from another] Aliens built space base on Earth 7,000 YEARS AGO to discover PLANET X, minister claimshttp://www.express.co.uk/news/weird/717451/Aliens-built-space-base-... A senior government minister has shockingly claimed that a fully-fledged space centre that launched crafts into our solar system was developed on Earth 7,000 years ago. Kazem Finjan, Iraqi Minister for Transport, told a packed press conference the space station was developed in the El Naciria area in around 5,000 BC. It was used as a launch site for spacecraft to explore our solar system and discovered mythical planet Nibiru, also known as Planet X, he said. Mesopotamia, now in south Iraq, is largely seen as the birthplace of civilisation, but according to Mr Finjan, it was also the birthplace of space exploration and even saw an ancient mission which first identified dwarf planet Pluto, long before its official discovery in 1933. [and from another] Iraqi Official Claims Airport Was Once an ET Base! http://www.coasttocoastam.com/article/iraqi-official-claims-airport... At the opening of a new airport in Iraq, the country's Minister of Transportation claimed that ancient aliens once used the same location for their spaceships! Speaking to the press, Kazem Finjan may have inadvertently blown the lid off of UFO secrecy when he declared that the current airport sits on the site of history's first airport ... from 5000 BC. Finjan told incredulous reporters to read the work of Zecharia Sitchin if they did not believe him. The official went on to detail how the location of the airport was a preferred spot of the Annunaki because its weather conditions made it ideal for launches to other planets. 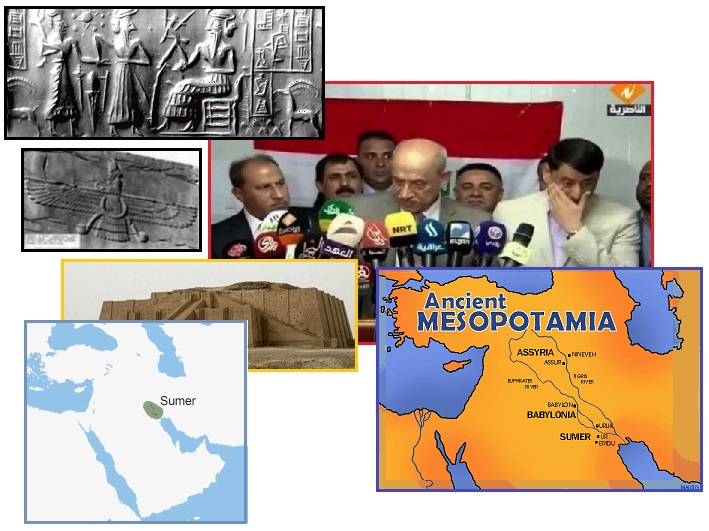 Was the mention of the ancient Sumerian city of El Naciria as a spaceport for the Annunaki by the Iraqi Transport Minister a deliberate assist to Prong 3? Without a doubt, and the fact that his words hit the media to the extent they did was likewise very deliberate. Prong 3 is poised to point to Nibiru where it sits today, next to the Sun and within the orbit of Venus. There will be a push and a pull in this regard, with the Dark Energy Survey looking for evidence of exoplanets close by via their infrared surveys over the past few years being the push, while chatter about the Annunaki in Sumer in the past will be the pull. The two ends will at some point meet.

20 October, 2016. Metallic aluminium was not produced by mankind until around 200 years ago - but this appears manufactured making the object a baffling find

A piece of aluminium that looks as if it was handmade is being hailed as 250,000-year-old proof that aliens once visited Earth.

The aluminium piece looks as if it was a handmade object

Metallic aluminium was not really produced by mankind until around 200 years ago, so the discovery of the large chunk that could be up to 250,000 years old is being held as a sensational find.

The details of the discovery were never made public at the time because it was pulled out of the earth in communist Romania in 1973.

Builders working on the shores of the Mures River not far from the central Romanian town of Aiud found three objects 10 metres (33 feet) under the ground.

They appeared to be unusual and very old, and archaeologists were bought in who immediately identified two of them as being fossils.

The third looked to be a piece of man-made metal, although very light, and it was suspected that it might be the end of an axe.

All three were sent together with the others for further analysis to Cluj, the main city of the Romanian region of Transylvania.

It was quickly determined that the two large bones belonged to a large extinct mammal that died 10,000-80,000 years ago, but experts were stunned to find out that the third object was a piece of very lightweight metal, and appeared to have been manufactured.

According to tests, the object is made of 12 metals, 90% aluminium, and it was dated by Romanian officials as being 250,000 years old. The initial results were later confirmed by a lab in Lausanne, Switzerland.

Other experts who conducted later tests said the dates were far alter, ranging between 400 and 80,000 years old, but even at 400 years old it would still be 200 years earlier than when aluminium was first produced.

What puzzled experts is that the piece of metal has concavities that make it look as if it was manufactured as part of a more complex mechanical system.

Gheorghe Cohal, the Deputy Director of the Romanian Ufologists Association, told local media: "Lab tests concluded it is an old UFO fragment given that the substances it comprises cannot be combined with technology available on Earth."

Local historian Mihai Wittenberger has tried to claim that the object is actually a metal piece from a World War II German aircraft. However, this does not explain the age of the artefact.

The metal object has now gone on display in the History Museum of Cluj-Napoca with its full history causing heated speculation after it was noted that museum officials had added a sign saying: "origin still unknown".