Sarwa explained , flooding also shut down a main road access road between regions , such as access to the national road from Kendal Semarang . While disasters due to overflowing of the river water at least seven areas in the region overrides the North Coast of Central Java . " It started from Pemalang , Pekalongan , Peklongan City , Batang , Semarang , Pati and Jepara up , " said sarwa .

Central Java Government implement an emergency response system involving interregional in the face of flooding . The program was set based on the area within the former Karisidenan . The concept of emergency response is done by coordinating with nearby regions not affected . " Like a disaster in the District and the City of Pekalongan and Batang , direct assistance came from Bradford , Tegal , and surrounding areas , " said sarwa .

Pati contained in three districts flooded , covering Heilbron , Cork , and Dukuhseti . Conditions are not much different also occurred in the city of Semarang , precisely in the Village Purwosari , District of North Semarang.

The number of flood-prone areas in Tangerang, Banten, has increased significantly over the past year, making programs to normalize four rivers flowing through the satellite city a top priority, an official says.
Tangerang Mayor Arief R. Wismansyah said on Tuesday that the figure had risen to 55 spots this year from 13 a year before.
“The increase was caused by four rivers that overflow every time it rains heavily. The four rivers comprise the Cisadane, Sabi, Angke and Ledug,” he said, adding that he had encouraged the Public Works Ministry, which oversees the rivers flowing through a number of regions, including Jakarta and Tangerang regency, to dredge the rivers. 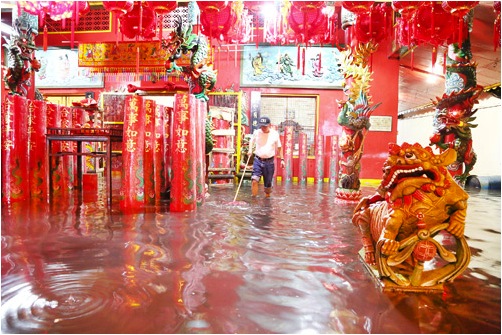 Losing battle: A man removes trash from the inundated Buddhist Amurva Bhumi Temple (Hok Tek Tjeng Sin) in Setiabudi, South Jakarta, on Wednesday. The temple was flooded on Tuesday night due to rising water levels in the nearby Krukut River. The temple authorities said they hoped the floodwater would recede soon so that devotees could celebrate the Lunar New Year on Friday. Flooding is an annual challenge for the temple ahead of the Chinese New Year. (JP/P.J. Leo)

The floods returned on Wednesday after incessant rain hit the capital overnight, forcing hundreds of residents to wade back to evacuation shelters.
Unlike the recent flooding, more commercial districts and main thoroughfares were affected by floodwater that snarled up traffic for several hours in the morning.
“It took seven hours for me to drive to Jl. Senopati [in South Jakarta] from Bekasi. The traffic jam was unbearable. It was the worst ever congestion this month,” Fika, a commuter, said.
The city police’s Traffic Management Center (TMC) reported dozens of inundated locations.
The underpass of Cawang toll road from Halim heading to Rawamangun was under 60 centimeters of water, while in the Pondok Jaya area in Mampang Prapatan, South Jakarta, floodwaters reached a depth of 100 centimeters.
Some streets, including Jl. Patra Raya in Duri Kepa in West Jakarta and Jl. Kemang Raya in front of Kem Chicks supermarket in South Jakarta, were paralyzed as the inundation was between 50 cm and 70 cm.
Transjakarta bus operators had to reroute seven of 12 corridors to avoid flooding, while commuter rail operator PT KAI Commuter Jabodetabek canceled the service from Bogor in West Java to Kampung Bandan in North Jakarta as the latter station was flooded.
According to Hari Tirto, head of the meteorology information subdirectorate with the Meteorology, Climatology and Geophysics Agency (BMKG), the flooding was a result of heavy rainfall that particularly hit downstream areas in West, East, Central and South Jakarta.
The intense rain was forecast to continue during the evening and into the next two days, he said.
According to data from the Jakarta Disaster Mitigation Agency (BPBD) the number of evacuees rose by over 600 to 9,985 from 9,368 on Tuesday. They were spread throughout 21 subdistricts in 11 districts and were currently being looked after in 34 shelters.
Most of the evacuees were from 14 subdistricts in East Jakarta, including Kampung Melayu, Bidara Cina, Cipinang Melayu, Cawang, Kramat Jati, Kampung Rambutan and Pondok Bambu. The depth of floodwater in those locations varied from 20 cm to 200 cm.
The BPBD reported that 51,526 people were affected by the floods, a jump from the 18,759 people on the previous day.
Neighboring Bekasi, Tangerang and South Tangerang municipalities were also affected.
Two meters of floodwater hit the Total Persada housing complex in Tangerang, only three days after the previous flood had receded. The residents had just returned after spending a week being accommodated at SD Total Persada elementary school.
“This [use of the school as a shelter] really disrupts the school activity. Our children could not go to school because the classrooms were being occupied by the evacuees,” Rita Zahara, a parent of a student at the school, said.
Neighboring Mutiara Pluit, Periuk Damai and Pondok Arum housing complexes were all inundated to a depth of 1 meter.
Tangerang Mayor Arief R. Wismansyah said on Wednesday that the Public Works Ministry had earmarked Rp 1.9 trillion (US$156.17 million) to dredge the Cisadane River, which should help to mitigate the perennial flooding in the municipality.
“The river normalization project will start in 2015 and is expected to be complete in three years,” he told a plenary session of the Tangerang Legislative Council. 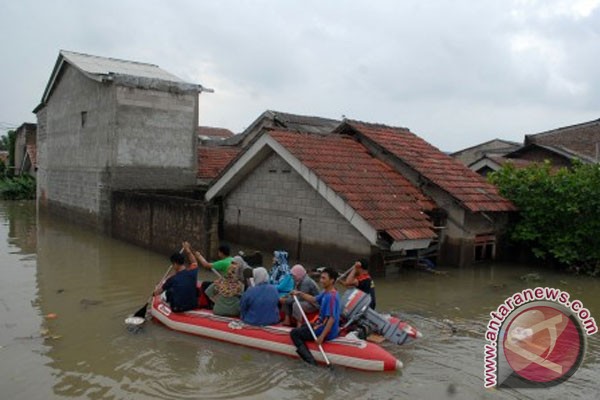 The floods that commenced on January 14, have affected 34 subdistricts, 100 urban villages, 444 neighborhoods, 672 families, and a total of 134,662 residents in the capital city, Sutopo Purwo Nugroho, a spokesman of the National Disaster Mitigation Agency (BNPB) stated on January 21.

In the North Sulawesi Province, the death toll due to the floods and landslides has risen to 19: six in Manado, six in Tomohon, six in Minahasa, and one in North Minahasa. In Manado alone, 85,831 people or 23,204 families were affected and over 10 thousand houses were damaged.

Most of the floods in those districts were caused by the rivers overflowing their banks or by the breaking down of dikes.

Thousands of houses in the Bandung Selatan district were inundated when the Citraum River overflew its banks in Baleendah.

In Karawang, the worst-affected district in West Java, the local administration has declared a state of emergency as 28 out of the 30 subdistricts have been flooded in the past few days.

In Karawang, tens of thousands of houses in 173 villages have been inundated over the past few days, after a number of rivers overflowed their banks due to the heavy rains.

"Karawang has declared a state of emergency for the next 14 days, effective January 19," Karawang District Head Ade Swara remarked in a press statement released on January 20.

On January 21, President Susilo Bambang Yudhoyono and First Lady Ani Yudhoyono visited Kerawang and took time to meet the evacuees and examined the on-site facilities. He also extended relief aid to the evacuees.

Parts of the Indramayu District, also in the West Java Province, have been isolated as a result of the incessant rainfall. Flood waters, reaching a height of 1.5 meters, submerged farming areas, while the flood victims are in desperate need of clean drinking water and electricity.

In the Bekasi District, in the same province, four elementary school students were found dead on January 20, after being swept away by the flood waters in South Tambun, two days earlier.

The West Javas Subang District suffered material losses amounting to US$2.6 million or Rp32 billion due to the floods since last Friday (Jan. 17).

"We have set up several temporary relief shelters for the people who were forced to abandon their homes due to the flooding. Each shelter is equipped with a kitchen and health service center," reported Abdul Rahman, a spokesman of the Subang District administration.

In Central Java Province, the floods have submerged hundreds of homes in the Kudus and Pakalongan Districts, following incessant heavy rains that caused some rivers to overflow.

Of the 12 casualties, however, only one body was retrieved, while the rest are believed to be buried under the mud and debris, reported Suroso, head of the social affairs office of the Menawan village.

In Pekalongan, the heavy rains that triggered a landslide and floods over the past few days displaced around seven thousand people, stated Susiyanto, a spokesman of the Pekalongan district administration on Monday (Jan. 20).

West Nusa Tenggara was also struck by flash floods, forcing at least 917 people in the district of Sambelia, Lombok Timur, to flee to safer grounds.

"They have chosen to evacuate due to the floods that struck yesterday, and they have now been accommodated in three shelters," the provinces head of public relations, Tri Budiprayitno, noted on Wednesday (Jan. 22).

The Obol-Obol, Tandongan, and Batusela rivers, located at the foot of Mount Rinjani, overflowed after incessant rains triggered flooding.

Four bridges and a prayer house have been wrecked, while three kilometers of roads have been eroded and around 80 hectares of rice and corn fields have been inundated by the floods.

On the Sumatra Island, several provinces including South Sumatra, West Sumatra, and Jambi, have also been inundated due to high rainfall.

In the Tangerang District, Banten Province, at least 11 thousand houses were flooded.

To help the victims of natural disasters such as floods, landslides, and volcanic eruption, the National Police (Polri) and the Indonesian Defense Forces (TNI) have asked their officers to be on vigil to handle the calamity.

They will support the local police officers in their efforts to assist the natural disaster victims till March, the police officer noted.

Meanwhile, some 19,357 military officers have been deployed to help the victims of natural disasters, which have currently struck parts of Indonesia.

TNI Chief General Moeldoko has instructed all the military officers across Indonesia to be on high alert during the ongoing rainy season, as the country has received excess rainfall, TNI spokesman Colonel Bernardus claimed in Jakarta, on Tuesday (Jan. 21).

Among other things, the TNI has set up flood mitigation command posts in Jakarta, West Java, Central Java, Sumatra, and Manado.

During 2013, Indonesia was hit by 693 natural disasters, of which, there were 262 landslides, 95 flash floods, one volcano eruption, 94 whirlwinds, and 171 categorized as other disasters.

villages are directly affected by floods, with 12 casualties. At least 62,819 persons are displaced

and staying in 253 displacement centers. • Meanwhile, in northern Sulawesi island, 19 people have been killed by flash floods and landslides, as of 19 January. 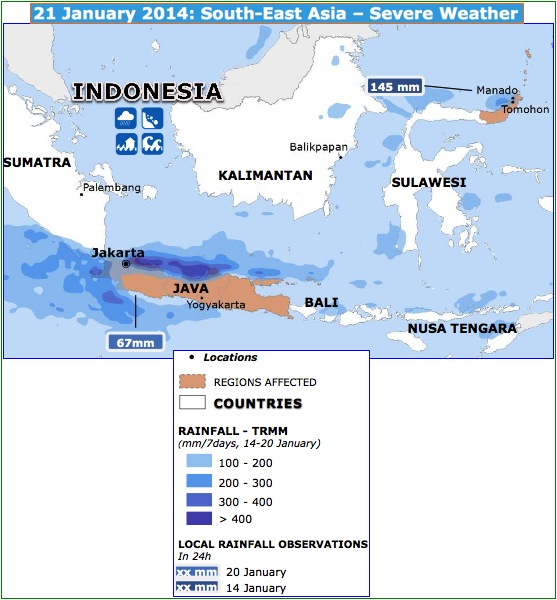 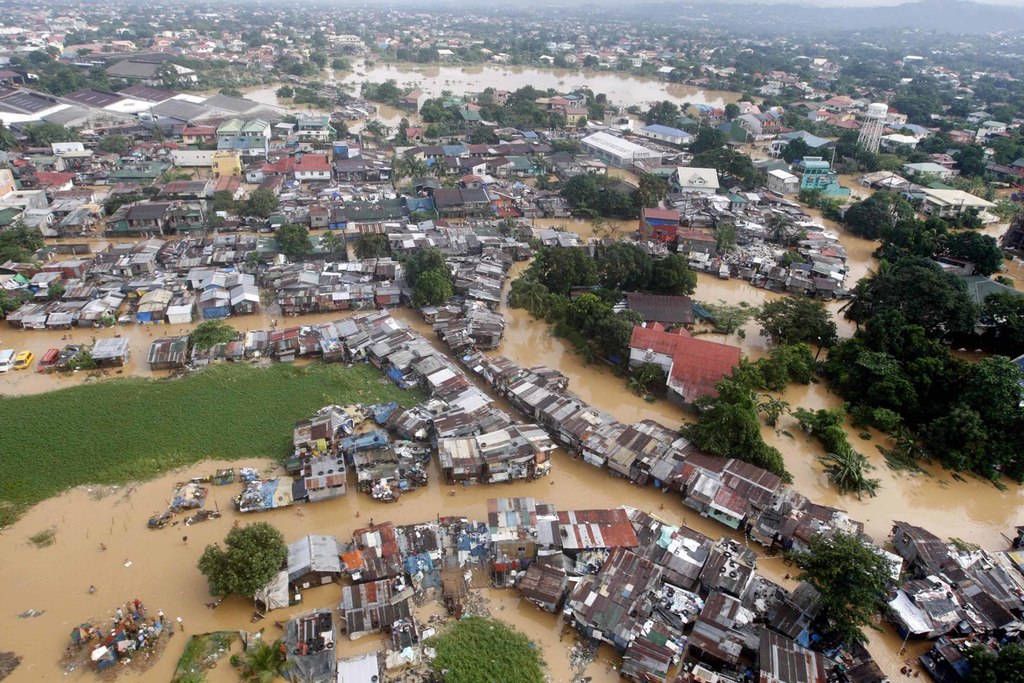 About 45,000 People in Capital Jakarta Have Been Affected, but Dry Forecast Offers Hope
Jan 20, 2014 JAKARTA, Indonesia—The number of people displaced by flooding in Indonesia's capital grew to almost 45,000 Monday, but drier weather offered some hope of respite to a perennial problem in this city of nearly 10 million people.

Heavy rains over the past week have pushed floodwaters into the second floors of homes in parts of Jakarta. Authorities opened nearly 200 mosques, tents, schools and municipal buildings across the city to take in evacuees.