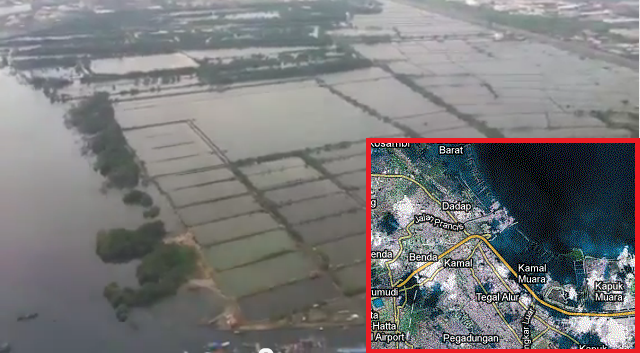 When I found these videos, some of them showed conventional rice fields.  Therefore, there was confusion. But upon research into 2008 videos it is obvious there is sinking in many places.

Nancy has helped to make research on this issue:

"Found two, between 2008 and 2011. The first series shows where the planes turn to go directly toward the city, aiming for the landing strip, a perpendicular (at right angles) shot from the coastline. One can see more flooding in the area when 2008 is compared to 2011 shots.

The second group is of a water canal that is distinctive. Here one does NOT see more flooding between 2008 and 2011, but this spot is a higher elevation than the other, I think. Attached a couple maps. You can see that just above Kapuk (the canal location) there is land at a 7 foot elevation drop, where just under the plane as it heads for landing at Kamal (the site of a crooked canal which shows up on the photos) it is flooded at 7 foot elevation drop." 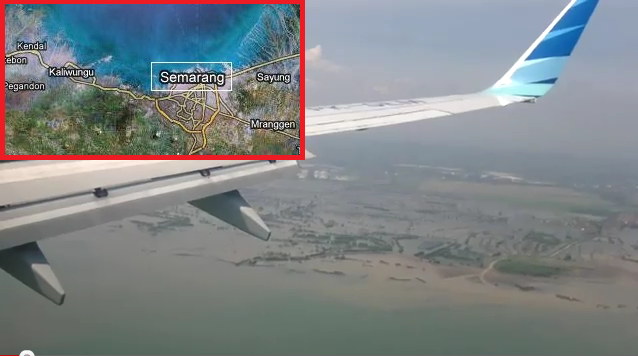 The same situation occurred in Semarang.

I could find in 2010 of Semarang. And in this video could be seen sinking on the other areas in Semarang.

But still need to compare all videos! The difference (flood) is entirely missing! So these pictures with the usual rice fields! It's rice fields!!! It's not sinking!

Unfortunately, other photo that I have found no similar photos.

But there is a photo that it is impossible to refute this: Comparing Google with aerial photography is clear that the flood in 2011 more massive than at Google.

Also, comparing the conventional cards with the satellite, it is clear that we are losing altitude also in 2010.

In this blog I posted a photo that can be proven.
Here there are also Java, South Borneo and some photos Jakarta: